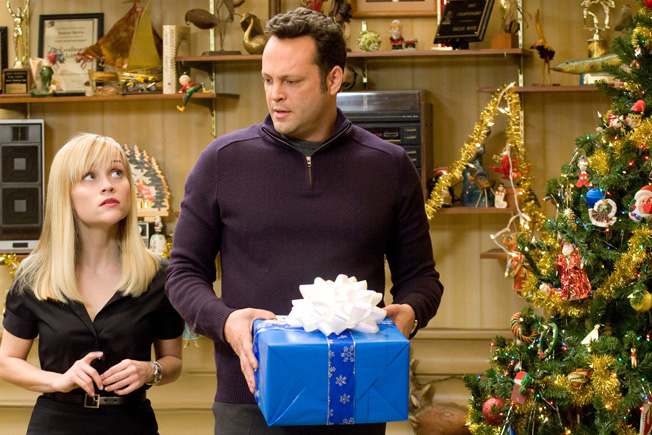 Three years into their relationship, Brad (Vince Vaughn, "Wedding Crashers") and Kate (Reese Witherspoon, "Walk the Line," "Rendition") believe they are perfectly happy being unmarried, childless and alone on the holidays, having told their families elaborate lies to duck them and vacation in exotic locales. But when San Francisco airport is fogged the two get caught by a television reporter and their cell phones begin to ring with parental invites. By the end of the day, Brad and Kate will reconsider the rules of their relationship as they celebrate "Four Christmases."

The past decade or two haven't been fruitful for holiday movies. For every decent effort like last year's "This Christmas" there are the lumps of coal like "Christmas with the Kranks," "Deck the Halls" and Vaughn's last yuletide effort "Fred Claus." "Four Christmases" looked promising with "King of Kong" director Seth Gordon making his feature debut with a dream cast, but four screenwriters haven't been unable to wrap this package. Brad and Kate first stop at Brad's dad Howard's (Robert Duvall, "Open Range") house, where he is tackled by his jock brothers Denver (Vaughn's 'Swingers" costar Jon Favreau) and Dallas (Tim McGraw, "Flicka") and Kate is shocked to learn her partner's real name (Orlando, the city in which he was conceived). Howard and his brood are the low rent relations who put a $10 cap on gifts and serve up baloney and mayonnaise casserole. Kate's forced to hold a screaming baby. Next stop is Kate's mom Marilyn's (Mary Steenburgen, "Step Brothers"), an all female enclave who delight in flirting with Brad and where he is shocked to learn Kate used to be fat. Kate's sister Courtney (Kristin Chenoweth, "Deck the Halls," TV's "Pushing Daisies") hands her a baby just in time for it to spit up (she also gets a live one when mom volunteers her and Brad for the Church's nativity play). From there it's off to Brad's mom Paula (Sissy Spacek, "In the Bedroom") who lives in an artsy modern home and where Kate learns Brad's childhood best friend is now his mother's paramour. On the road to the final stop, Kate, who has impulsively taken a pregnancy test, tells Brad she's now thinking of having a kid (even though all kid-related contact has been negative). The two have split by the time they reach Kate's dad Creighton's (Jon Voight, "Pride and Glory") where mom coexists peacefully with his new girlfriend (the talented character actress Celia Weston, allowed only to introduce herself here). The fact that "Four Christmas" has a running time of 83 minutes was the initial warning sign that something may be amiss about this film, and, indeed, besides the fact that the four visits would be logistically impossible, it is apparent that a lot of this film didn't make the final cut - how else to explain the presence of Weston with one line and Carol Kane (TV's "Taxi") as an aunt with none? It would have been easy enough to spread the action over Christmas Eve and Day, but instead, the filmmakers opt for a seeming 40 hour day and do not make clear which it is. Why, for example, would a neighborhood of children be at the Jump Jump in Marilyn's backyard instead of with their families when family dinner and gift giving was ongoing at the previous stop? The only household that seems something like believable is Howard's, and that one is played for broad and obvious pratfalls. Marilyn's house is like a coven of succubi, Paula's, with Brad's friend trying to play dad, creepy, and Creighton's embalmed. The only bit of true comedy comes when Marilyn drags the family to Christmas services (she's dating Pastor Phil (Dwight Yoakam, "Wedding Crashers," "Crank")) and Kate and Brad end up as the Virgin Mary and Joseph. Vaughn has some fun as a Christmas ham, taking over the show to Witherspoon's detriment. "Four Christmases," like its four screenwriters, are three too many. Considering what's been left on screen, it is downright horrifying to contemplate the trimmings.