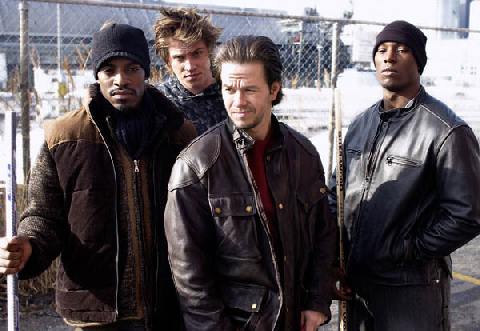 Evelyn Mercer (Fionulla Flanagan) is a dedicated social worker that, long ago, adopted four of her troublesome wards that no one else wanted. One night, she drops by a local convenience store on her way home and witnesses the robbery and murder of the clerk, then become the victim in what appears to be a senseless killing. When her sons all return home to bury their mom, they learn that the murder was deliberate and set out to avenge her death in “Four Brothers.”

When Evelyn Mercer (Fionnula Flanagan, "The Others") is shot in a convenience store holdup, the occasion pulls together the four young boys that she adopted when she couldn't place them in any other foster home. Tough guy Bobby (Mark Wahlberg, "I Heart Huckabees") and dreamer musician Jack (Garrett Hedlund, "Troy") are white while loverboy soldier Angel (Tyrese Gibson, "2 Fast 2 Furious") and family man/businessman Jeremiah (Andre Benjamin, "Be Cool") are black, but through and through these men are "Four Brothers." Screenwriters David Elliot and Paul Lovett add a new twist in their exploration of what makes family - a crime drama. Director John Singleton ("Boyz n the Hood," "2 Fast 2 Furious") and his four leads combine action with brotherly camaraderie in a quest to discover who murdered one of Detroit's most well-loved citizens - their mom. Mark Wahlberg delivers a cocky performance capped with hilarious put downs and gives the film its grounding as the clan's impetuous older brother. After Evelyn's funeral, Lt. Green (Terrence Howard, "Crash," "Hustle & Flow"), a childhood friend of the boys, and Detective Fowler (Josh Charles, "S.W.A.T.") visit Jerry's Detroit home to warn Bobby off of retribution, only to be told 'you're the kind of cops who couldn't find tits in a strip joint.' With the gauntlet dropped, Bobby and his bros take a time out to celebrate Thanksgiving just like their mother would have liked, then begin their own investigation. In short order, they discover that the cops' sole witness was paid and that their mother was set up by Victor Sweet (Chiwetel Ejiofor, "Melinda and Melinda"), Detroit's most threatening gangsta,' who is also embroiled in the real estate business dealings of their own Jeremiah. Singleton does a moderate job covering his red herrings as his story takes some surprising twists and turns, but he really delivers with a satisfying, crafty wrapup. "Four Brothers" is most enjoyable, though, for the interplay among the four leads. Wahlberg's a hot head and a bulldog who mercilessly teases with gruff affection. Singleton 'find' Tyrese Gibson continues to prove himself, here a real smoothie in the face of everything but his fiery Latino lover Sofi (Sofía Vergara, "Lords of Dogtown"). Hedlund has a quiet sweetness that suits the baby of the family while Benjamin reflects the burden of responsibility. While the living members of the family make a believable and engaging group, efforts to introduce Evelyn's impact on them all with imaginary encounters is awkward at best, painting the woman as a disciplinary scold, albeit a tattooed and twinkly one. "Hustle & Flow" costars Howard and Taraji P. Henson as Jerry's wife Camille have little to do, but Vergara, disparagingly named 'La Vido Loca' by Bobby, rips up the screen. Chiwetel Ejiofor goes completely against type as the totally hissable Sweet. Snowy locations serve a double duty, suggesting holiday gatherings and familial sport while also endangering in car chases and meetings held in the middle of a frozen lake. In one climatic scene, a snowball becomes a kiss of death. "Four Brothers" is an imperfect but well done revenge tale that's punchy with brotherly love. These momma's boys mean business.

John Singleton was the youngest director nominated for an Oscar for his debut film, “Boyz In the Hood.” He hasn’t, since, attained that level of acclaim but has proven a talented craftsman and filmmaker (“Poetic Justice,” “Baby Boy,” “Shaft”) and takes on a story of love and revenge with his latest tome starring Mark Wahlberg, Tyrese Gibson, Andre Benjamin and Garret Hedlund as the title brothers. These four problem children were raised with love and care by Evelyn but each has gone his own way. When they learn of her murder, the four come together to pay their mother homage but soon learn that her death was more than some random killing at a hold-up gone badly. Bobby (Wahlberg), Angel (Gibson) and Jack (Hedlund) join their businessman brother Jeremiah (Benjamin) to investigate her death and learn that the murder was, in fact, an execution. This begins a story that involves shady dealings, criminal manipulation and police corruption as the four set out to get to the bottom of the seemingly senseless killing. Four Brothers” benefits greatly from its richly varied cast and a story that starts with a bang (literally) and builds into a tale of vengeance and retaliation. I don’t want to say too much about the story because this is the type of yarn that deserves the chance to surprise the viewer and keep you guessing. Mark Wahlberg does a solid job as the eldest of the four brothers and the catalyst to get to the bottom of things. The actor gives dimension to blue-collar Bobby, a man whose shady past makes him relentless in finding his mother’s killers. The rest of the players are well cast from Booby’s brothers to good cop, Green (Terence Howard who is on a streak this year with Crash,” “Hustle & Flow” and now this film) to bad cop, Fowler (Josh Charles) to crime kingpin, Victor Sweet (Chiwetel Ejiofor). Fionnula Flanagan appears only briefly, mostly in her sons’ minds, but the actress resonates the firm-handed love she feels for her boys The story, by David Elliot and Paul Lovett, runs the gamut of sadness and loss, car chases, shootouts, good cops, bad cops, even badder criminals and, in the end, sweet revenge. Techs are first rate with the action equaling the drama, particularly during a seat gripping car chase as the brothers go after mom’s killers in a driving blizzard. High marks for making what has become routine in movies – the car chase – and making it fresh. Four Brothers” is well made entertainment that takes its disparate main characters and makes them sympathetic. Sure, it’s a vengeance-is-mine flick but one that is packed with drama, action and humor.