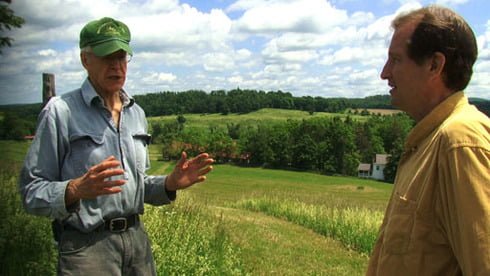 Despite decades of medical advances, cases of diabetes, heart disease and cancer continue to rise in the United States and the patients are getting younger. When a nutritional scientist, Cornell University's Dr. T. Colin Campbell, and a surgeon, Dr. Caldwell Esselstyn, met, they discovered they had both been on paths towards the same conclusion - that removing animal proteins and adopting a whole foods, plant-based diet could not only stop the progress of these diseases, but reverse them. They are just two advocates of "Forks Over Knives."

Recent years have given us such documentaries as "Food, Inc.," which revealed nasty truths about industrialized food production and "Super Size Me," in which Morgan Spurlock risked his life eating a McDonald's diet. "Forks Over Knives" is a more old-fashioned style documentary than either of those two, but it is chockful of fact after surprising fact about how we really are what we eat. Writer/director Lee Fulkerson takes a multi-pronged approach to his subject, including using himself as a sort of reverse Spurlock, putting himself the care of a physician who uses a plant-based whole food treatment. During the course of the film we follow several other patients, including the very sick trial subjects Esselstyn used in a study, and the results they achieve are nothing short of amazing. One of the film's few flaws, more of an omission, is its failure to explain how a breast cancer patient survived her illness - was it from dietary change alone? Fulkerson also looks at how the U.S. Government impacts how we eat, and, as was also concluded in "Food, Inc.," we see that the food industry holds great sway. The 'Got Milk?' campaign has many convinced that milk is essential for bone health, but as Campbell, raised on a dairy farm, states, milk is only 'perfect food' for calves. In an incredible medical study, when casein, milk protein, made up 20% of a rat's diet, tumors grew. When that amount was reduced to 5%, the tumors began to shrink. To add irony, people who think they're doing themselves a favor buying lo-fat or skim milks are actually increasing their intake of animal proteins. Michelle Obama's war on childhood obesity is underlined by hard, cold facts here, like how commonplace heart bypass surgery has become and how it costs the nation fifty billion dollars a year. Another scientist explains why our bodies crave what is not good for us (we're geared to 'feel full' on a plant based diet), concluding that bad foods are as additive as drugs. And the drug industry, recently called onto the carpet in "Orgasm, Inc.," is making huge profits with help from doctors when nutrition often holds the key. Erectile dysfunction, we're told, is the first indicator of general cardiovascular disease. One of Esselstyn's patients, a seventy-something gentleman who had undergone quintuple bypass surgery, is proud that he can still 'raise the flag.' There is extensive coverage of Campbell's nutritional study of China, one of the largest of its kind, and the reams of data continue to point to what he and Esselstyn now preach. Yet "Forks Over Knives" never feels preachy. It's an absorbing work that goes on many paths to support its subject, yet some nagging questions remain. We see a salmon fillet in a montage, and a fried fish shack in another and are told that 'if it has two eyes, a mother and a father, don't eat it,' but are left wondering if protein from seafood is as damaging as that from beef. Everything's lumped together into the 'bad' pile, with no gradations. Still, "Forks Over Knives" may give off the odor of one of those 'good for you' documentaries, but it goes down more like a spoonful of sugar than codfish oil.