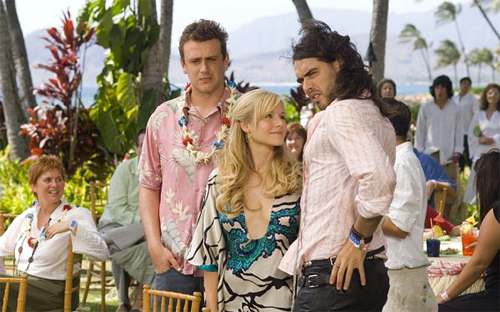 Peter Bretter (Jason Segel) is despondent when his TV star girlfriend dumps him. He decides to go on vacation to Hawaii to get away from the pain of the breakup but his plans are dashed when she and her new boyfriend arrive at the same resort. Now, Peter must find another way to go about “Forgetting Sarah Marshall.”

"How I Met My Mother's" Jason Segel's autobiographical comedy (directed by first timer Nicholas Stoller and produced by the ubiquitous Judd Apatow) tells us so much about himself with his first writing credit one wonders how he will return to the well. I did not need to see such evidence, for example, that Segel enjoys hanging nude, a sight we are treated to repeatedly. More interesting is his quest to create a puppet vampire opera, which provides the film a cute close, but from the nude breakup with television star Sarah ("Veronica Mars's" Kristen Bell) until that point, Segel's Peter Bretter is far less interesting than some of his supporting players. Most notable is the utterly hilarious British comic Russell Brand ("Penelope") as 'offensive in a silly way' English rocker Aldous Snow, the man who's stolen Sarah's heart. We need to see more of this guy. Also great with less screen time is the always reliable Paul Rudd ("Knocked Up") as a stoner surfing pro who bonds deeply with, then forgets his clients. As Peter's webcam support back home, Bill Hader ("Superbad") is amusingly obsessed with video tricks and SNL's Liz Cackowski is adorable as his wife with the female perspective. As Peter's new love interest, hotel clerk Rachel, Mila Kunis (TV's "That '70s Show") proves she's ready for the big screen with a fresh and funky performance. Bell maintains sympathy with a difficult role where she is first glorified then brought down to size. For all its clever gags, though, "the movie seems awfully familiar with its 'broken up couple end up at same resort' plot (think "Honeymoon in Vegas" for one). It's certainly a big step up for Apatow produced projects from the negligible "Drillbit Taylor," but despite the parade of familiar faces, 'Forgetting Sarah Marshall" isn't the equal of his 2007 output.

The Judd Apatow juggernaut, which brought us such huge hits as “The 40-Year Old Virgin,” “Knocked Up” and Superbad” bellies up to the bar once again to try to capture its youthful demographic with a comedy that takes pains to shock (with star Jason Segel going full frontal not once but several times). The story, by Segel, is routine comic fare that works best with its supporting characters rather than its star. While Segel (from TV’s “How I Met Your Mother”) is mildly amusing, Russell Brand steals the show as Brit rocker Aldous Snow, Sarah Marshall’s (Kristen Bell) new squeeze. The actor makes his character a funny and randy guy who is likable despite his cuckolding of Peter. Mila Kunis is strikingly pretty as the hotel desk clerk, Rachel, who lends Peter a sympathetic ear and possible love interest. Bill Hader is an anchor as Peter’s voice-of-reason step brother who offers sage advise to his bro. Steve Landsberg (Dietrich on TV’s Barney Miller”) gives an amusing cameo as Bretter’s doctor (though he is a pediatrician). The gorgeous Hawaiian backdrop is a lovely setting for the film. Techs are OK but nothing special. Forgetting Sarah Marshall” hits its Apatow fan target aud but will likely be limited to those chomping at the bit for another lewd comedy, this one directed by first-timer Nicholas Stoller. I mildly enjoyed the flick but Apatow’s other comedies works better.