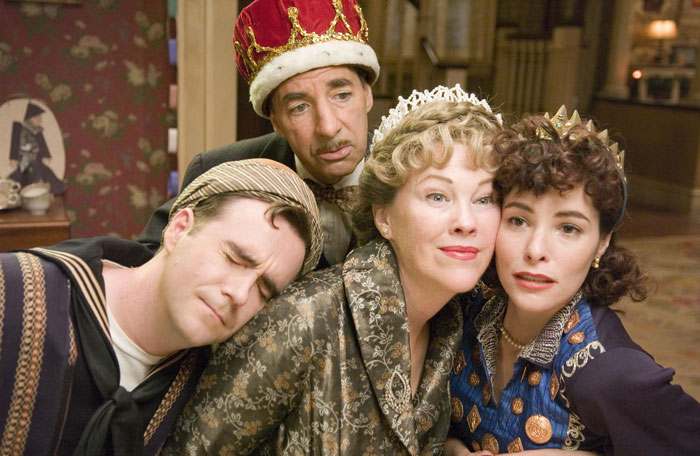 Director Christopher Guest has mocked small town theater, dog shows and folk music and now bites the hand of the biz that has allowed him to do his satires in “For Your Consideration.”

In Hollywood, a first time director is making a little indie, a rather ridiculous melodrama called "Home for Purim," in which a washed up actress with one semi-famous cultish role from decades earlier is playing a dying matriarch hoping to reconnect with her daughter. When a crew member tells her about an Internet tidbit that suggests her performance is Oscar nominee caliber, the rumor infects the entire production right up to Sunfish Classics President Martin Gibb (Ricky Gervais) who starts a campaign "For Your Consideration." Cowriter (with Eugene Levy)/director Christopher Guest (who also stars as director Jay Berman as a Rob Reiner type with Art Garfunkel hair and insane footwear) gathers his troupe to exploit the tender egos of Hollywood's hopefuls in his first non-mockumentary comedy. This insidery look at the business has its share of laughs, mostly due to some of the talented cast's sharply drawn characters, but on the whole this is Guest's most lightweight effort to date. The aptly named Marilyn Hack (Catherine O'Hara, "A Mighty Wind") is introduced mouthing along to Bette Davis's "Jezebel." She instructs makeup artist Sandy Lane (Ed Begley, Jr., "A Mighty Wind") to make sure she looks young even though he's tasked with aging her. Her costar is Victor Allan Miller (Harry Shearer, "A Mighty Wind," absolutely terrific), a guy known mostly for old television commercials. The Pischer (look up the Yiddish definition) family is awaiting the return of their daughter, who is played by up and comer Callie Webb (Parker Posey, "A Mighty Wind"). The actress is in a relationship with Brian Chubb (Christopher Moynihan, "A Mighty Wind"), the actor who plays her brother in the movie. Once Hack hears that Internet rumor, she becomes obsessed with it. Then an LA morning show books her and Miller on and Miller's name starts getting tossed around as well (he's talkative while Hack sits in stunned silence, overcome with her own importance). An entertainment news show team ("A Mighty Wind's" Fred Willard and Jane Lynch, whose aggressive body language is hilarious) brings Callie's name into the picture resulting in dueling best actress candidates and broken relationships. According to press notes, "For Your Consideration" was inspired by Guest's run in with a Southern Jewish family speaking Yiddish and by the Oscar talk that greeted Eugene Levy's "Mighty Wind" performance, but while the actors do milk comedy from the frailty of the actor's ego, "Home for Purim" is too obviously awful without being particularly funny. O'Hara's broad take on her character hits home nonetheless and her ghoulish makeover (she looks like the titular character of 1928's "The Man Who Laughs") must be seen to be believed (and, one imagines, must have been rather physically demanding). The usually reliably Levy, though, disappoints with rather obvious schtick as Miller's agent Morley Orfkin and Jennifer Coolidge, as a clueless producer overly fond of silly hats, has never been less inspired. John Michael Higgins ("A Mighty Wind") is amusing as a unit publicist, but he's also the prime offender of the film's weakest gag - that much of the production would be clueless about the Internet. Carrie Aizley ("Best in Show") has a choice gig as the interviewer for the film's on set featurette, but her material should have been funnier. Don Lake and Michael Hitchcock are more dead on as a dueling pair of 'Love It' and 'Hate It' film critics. "For Your Consideration" is amusing in fits and starts, and sometimes almost poignant, but it often feels like missed opportunity. There is just too much talent on hand, though, to make it a disappointment.

Has been “movie stars” Marilyn Hack (Catherine O’Hara) and Victor Allan Miller (Harry Shearer) have been plodding around show biz for years after their earlier (and only) successes. They are now toil to earn their pay (at scale) on the debut film of fledgling director Jay Berman (Christopher Guest), “Home for Purim,” about a rural New York family embracing their Jewish heritage. Things, though, are about to change for these actors and their costar, Callie Webb (Parker Posey), when an Internet speculator touts the “Purim” stars for their Academy Award-worthy performances. The anonymous Oscar buzz feeds the Hollywood rumor machine and, suddenly, the three are being publicized to win the much-sought statuette. When “Hollywood Now” anchors Chuck Porter (Fred Willard) and Cindy Martin (Jane Lynch) announce to the nation the rumor-turned-indisputable-fact, the “Purim” cast and crew see their film as their means to fame and fortune. The low budget movie is considered a sleeper hit (even if it is not yet completed) by its publicist, Corey Taft (John Michael Higgins), producer Whitney Taylor Brown (Jennifer Coolidge) and talent agent Morley Orfkin (Eugene Levy) but there is a wrench falling into the works. The head of the company producing “Home for Purim,” Martin Gibb (Ricky Gervais), sees that project may have broader appeal if the director Berman and his writers Lane Iverson (Michael McKean) and Philip Koontz (Bob Balaban) throttle back” on the film’s Jewish theme. Things are thrown into turmoil with the sudden changes and ever-increasing Oscar buzz. For Your Consideration” is not the mockumentary type of film that Chris Guest is famous for. “Waiting for Guffman,” “Best in Show” and “A Mighty Wind” were true mock docs following the lives of their subjects to often-hilarious effect. “FYC” is shot in hand-held camera, documentary style but is a more conventional story than its predecessors. Guest is comfortable with his ensemble cast satires but, here, bites off a bit more than he could possibly chew. The number of players and storylines explored is a magnitude greater than before and, without the mock doc regimen, is more scattershot than the filmmaker’s previous (funnier) efforts. FYC” is a bit of a disappointment for me, someone who has been a fan of Chris Guest since he came to note as one of the creators of “This Is Spinal Tap.” He has developed his own acting troupe since then with such mainstays as Michael McKeon and Harry Shearer leading his loyal band of thespians. This long-together troupe also includes O’Hara, Parker Posey, Fred Willard, Jane Lynch, Jennifer Coolidge, Bob Balaban and others, but the Guest gene pool is thinned out with a bunch of newcomers to his little group. The cast, across the board, plays their parts well enough but there are so many that they blur together vying for attention. While I like individual characters, there is too little time in the 86-minute movie to develop and invest in any of them (except for, maybe, Harry Shearer). For Your Consideration” runs out of steam as we see the starry-eyed Oscar wannabes go through their acting paces, showing their true form. The buzz elevates the actors far above their real talent so the outcome is no surprise to me. Expectations for “FYC” exceed the results.