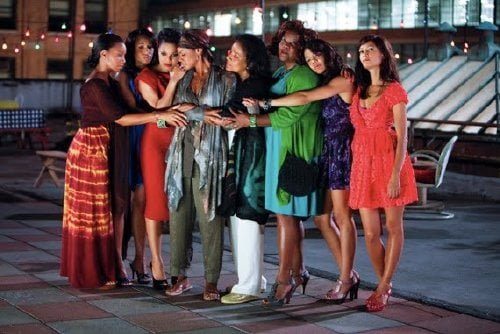 Seemingly inspired by last year's "Precious," which he helped bring to large audiences with Oprah Winfrey as executive producers, writer/director Tyler Perry ("Madea's Family Reunion," "Why Did I Get Married Too?") tries to get into the artistic act himself by adapting Ntozake Shange's 1975 play "For Colored Girls Who Have Considered Suicide When the Rainbow Is Enuf," a collection of twenty poems, as a "Crash" style film of intersecting stories in "For Colored Girls."

And while the director has pulled together a terrific cast, a who's who of Black female actresses across three generations who have given him performances from good to terrific, Perry himself is just not a good enough director to shape this dated material which paints all its women as victims and all but one of its males as abusers, abandoners, rapists and murderers. In the play, seven characters represented by colors performed the poems. Perry's adaptation keeps some of the poetry, but also uses regular dialogue and the transitions between the two are jarring. In fact, only one of the actresses is able to bring some naturalism to the more poetic passages and a couple of others suffer for it. Perry's experience filming his own plays hasn't given him the ability to adapt someone else's. He's also pretty obvious translating the color scheme into the costume design. The film begins with a visit by Child Welfare Services's Kelly (Kerry Washington, "Lakeview Terrace," "Mother and Child") to Crystal Wallace (Kimberly Elise, "Beloved," "The Great Debaters") and her two beautiful children. Crystal tries to hide the children's father, Beau Willie (Michael Ealy, "Seven Pounds," "Takers"), asleep in the bedroom, but he comes out and acts in a threatening manner. Shaken, Kelly retreats. Across the hall Tangie (Thandie Newton, "Crash") is abruptly informing her overnight guest that he can take coffee to go and depart the premises, for which she is called a 'crazy bitch.' Tangie's mother Alice (Whoopi Goldberg), a religious fanatic who lives on a floor below with Tangie's younger sister Nyla (Tessa Thompson, 2006's "When a Stranger Calls"), comes begging for money, but is turned down, Tangie clearly relishing the control she has on the purse strings. Nyla goes to her dance class and relates her weekend with male friends to her classmates in the first instance of poetic speaking going off the rails and it is at odds with the end results (Nyla ends up in a back alley abortion from quite another era), but at least she's gotten us out of that apartment building. (Perry's idea of keeping the visuals interesting is to have cinematographer Alexander Gruszynski ("Hamlet 2," "2009 I Can Do Bad All by Myself") break up all those soliloquy close ups with the occasional tracking shot to transition scenes.) Nyla's teacher Yasmine (Anika Noni Rose, "Dreamgirls," "The Princess and the Frog") returns from a date with Donald (Hill Harper, TV's 'CSI: NY'), whose request that their second date be a home cooked meal screams trouble. Kelly meets her cop husband Bill (Khalil Kain, TV's 'Girlfriends') at the doctor's to learn she cannot conceive because of an earlier STD, forgetting Crystal's imperiled children. Crystal goes to work for her "The Devil Wears Prada" boss Jo (Janet Jackson, looking like Liza Minelli's dark side) and gets chewed out for being late despite her excellent job performance. Local neighborhood activist Juanita's (Loretta Devine, "Crash") been waiting an hour to ask Jo for funding and turn's the magazine exec's arrogance against her in a stand up and cheer tirade. Jo's bad temper is 'explained' by her husband Carl (Omari Hardwick, "Kick-Ass," "The A-Team") who has taken it upon himself to invest her money and who has a wondering eye for other men. Juanita can move mountains for other women but allows her old lover Frank (Richard Lawson, "Guess Who"), who keeps leaving her for another woman, to move back in. There isn't a bad performance in the bunch but there are standouts beginning with Elise's tortured mother, caring for a damaged man who brings her nothing but misery. The performance is a giant ache combined with top notch professionalism. She's beautifully supported by Ealy, who is able to let us see just a chink of what used to be lovable before he was consumed by demons. In only one scene singer Macy Gray ("Training Day") astounds as a bat shit crazy abortionist. These three actors scenes are so good they rise above Perry's ineptitude. Loretta Devine may always turn in the same type of brassy feistiness, but she's always entertaining to watch and Jackson's interesting losing herself in an unlikable character who gains some self knowledge. As apartment manager Gilda, Phylicia Rashad (TV's 'The Cosby Show') conveys both a busy body and carer, an ability to shift tone that Perry doesn't possess. "For Colored Girls" is a series of filmed speeches studded with horrific bits of drama (for which Aaron Zigman's score is turned to 11), but the actors keep much of it afloat. Still, did Perry have to leave us by lining them all up in a row as if they were about to take a bow?

Tyler Perry has done it again. He has made me not like his movies, except, maybe, “Diary of a Mad Black Woman.” With “For Colored Girls,” he veers away from producing and directing his own screenplay and, instead, adapts the 1970 African-America gggggirlllll empowerment play by Ntozake Shange, “For Colored Girls Who Have Considered Suicide When the Rainbow Is Enuf." The result is a bad movie that casts some of the cream of the crop of black actresses – Kimberly Elise, Loretta Devine, Thandie Newton, Anika Noni Rose, Kerry Washington, Janet Jackson, Tessa Thompson, Whoopi Goldberg, Phylicia Rasha and others – who work very hard to breathe life into clichéd characters and a flat script. Each woman has a story – troubled marriage, male abuse, career problems, teen pregnancy, prostitution and more – so each is given one or more speeches (poems from the original play) in extreme close up. 20 separate poems means 20 separate speeches and it gets tedious, ad nauseum. These women are all portrayed as loyal sisters who must bear the burdens that their men folk place upon them. In “For Colored Girls,” women are good and the men are, almost all, bad. It is a cliché overdone and, unless you are a die hard Tyler Perry fan, should be missed. It is only because of some very fine acting that