For a Good Time, Call… 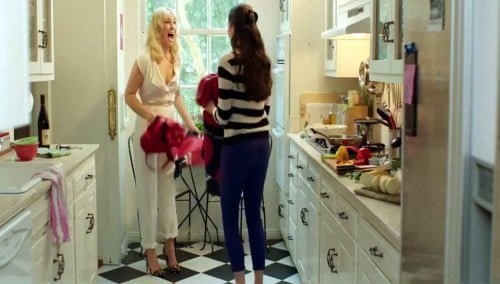 Lauren Powell (cowriter Lauren Anne Miller) is quite shocked to find out that the man she expected to marry is utterly bored in their relationship and turns to her best, gay friend Jesse (Justin Long, "Going the Distance"). As she needs a new place to live he arranges a meeting with another girlfriend who is being priced out of her deceased grandmother's coop overlooking Central Park. But Katie Steele (Ari Graynor, " Celeste & Jesse Forever") turns out to be the drunken party girl who abused Lauren's ride home by vomiting all over her. Lauren moves in reluctantly, and finds out something even more unnerving - Katie's running a sex phone line out of the apartment in "For a Good Time, Call..."

For her first major role, Miller takes on one she should know well, as she discovered her own college roommate, cowriter Katie Anne Naylon, was doing the same thing in their dorm room. Furthermore, as in the film, the sex phone operator had a surprising secret. It's certainly an amusing premise, but sweetness and raunch are a tricky mix. Judd Apatow excels at it. First timers Miller and Naylon aren't quite there yet. The film is essentially an odd couple movie. Lauren has ambitions of becoming an editor and her current jobless status adds stress to the situation. She's conservative in dress and behavior and more than a bit uptight - it wasn't difficult to see why Charlie (James Wolk, TV's 'Political Animals') grew tired of their routine. Katie is the typical free spirit, a woman who has managed to coast through life on the good graces of granny and others, but now that the old woman is gone she hasn't even figured out that she needs a plan. She dresses and speaks provocatively and is the type who could talk her way out of a speeding ticket. Surprisingly, it is through their careers that the girls find their common bond. Lauren has an interview for her dream job and is told that she is a prime candidate - if she can wait out the summer. So when she discovers Katie's rinky-dink phone sex operation, she makes a proposal - Lauren will handle the business end as long as she doesn't have to field calls. Katie will handle customers. They buy a pink phone, hire another operator and, again with Jesse's help, even shoot a commercial. Business booms and Lauren says she's all in. The film bounces along with lots of little 'bits' showing the clients at the other end of Katie's line. Kevin Smith pops up as a cabbie, Miller's fiance Seth Rogen is an airline pilot wanting a 3-way during a layover, cause for Lauren's baptism. Katie's favorite client is Sean (Mark Webber, "Scott Pilgrim vs. the World"), a regular caller who acts more like he's courting her than paying for sex talk. You can guess where this is heading....but not before the big obstacle is thrown between the two friends. Lauren's parents Scott (Don McManus, "Magnolia") and Adele (Mimi Rogers, "Hope Springs") have the annoying habit of dropping in at the most inopportune times and happen to do so as the girls are preparing to celebrate the first broadcast of their commercial. Katie tries to cover as Lauren's on her follow-up interview, presumably to turn the job down. But when Lauren returns, it becomes obvious she went with her heart after all. Katie turns spiteful. Stumbles like these hurt what could have been a cute little film. Katie's third act retaliation is all out of proportion and not in character - the girl's an irresponsible ditz, but she's got a good heart. The phone sex talk often grates, the raunch not played against enough of a comedic buffer to soften it, giving the impression of nice girls spewing filth. Only Sarah Silverman really knows how to run that schtick. When Katie achieves her own personal 'goal,' she immediately turns to Lauren, which, under the circumstances (I don't want to spoil it) kind of diminishes it. Perhaps a more experienced director could have smoothed some of these bumps, but like the writers, Jamie Travis is a feature first timer. The production itself is nothing special. Ari Graynor, who always seems to be channeling a bit of Bette Midler, is a talented comic actress and her likability factor is wide, so her presence makes a lot of "For a Good Time, Call..." go down more easily. If Miller transmits another talent it's only part of one - that squeak that invades Alicia's Silverstone's speech when she's excited. Otherwise the jury's still out, although in fairness, she does have the stick-in-the-mud part. Justin Long is also a guaranteed asset. Nia Vardalos ("My Big Fat Greek Wedding") pops up as Lauren's potential boss.