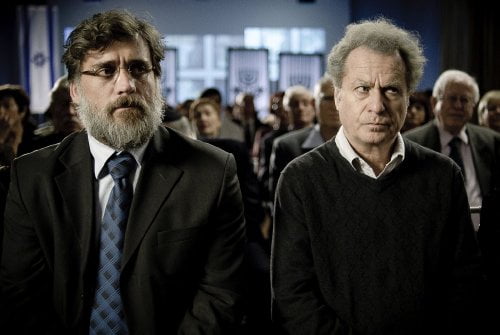 Eliezer Shkolnik (Shlomo Bar Aba) discovered a different version of the Talmud through his painstaking philological comparisons of existing texts over the course of thirty years, but his work was made irrelevant when his colleague Yehuda Grossman (Micah Lewesohn) actually found the physical text hidden beneath the binding of another book and published before him. Now Eliezer's son, Uriel Shkolnik (Lior Ashkenazi, "Late Marriage"), is becoming widely respected in the same field, but for a vastly different type of study which Eliezer regards as lightweight just as his own work looks to be relegated to a "Footnote."

When "A Separation" won the Foreign Language Film Oscar, Iranian newspapers declared it as a victory over Israel. Oddly enough, Israel's nominee, "Footnote," which won the 2011 Cannes Film Festival's screenplay award, has much in common with the Iranian film. In both, a family is divided by universal human traits set within a distinct cultural context. Writer/director Joseph Cedar ("Beaufort") takes an outwardly comedic look at the tragedy of the divisive relationship between a father and son. The elder Shkolnik is a stubborn crank whose only stock rests with the old ways of doing things. He's a cantankerous outcast who criticizes his son's work as touchy feely indulgence over scientific study, a shift he holds the entire academic world responsible for. Though he's long lusted for recognition, he believes the Israel Prize has become tarnished over the years. At his son's induction into the Israel Academy of Sciences and Humanities, he leaves during Uriel's speech (which revolves around an affectionate anecdote about his dad) and tussles with security when he tries to reenter without the proper identification, then refuses to drive home with the family, insisting he will walk instead. At home, his wife (Aliza Rosen) disgustedly slams their bedroom door and watches talk shows as he closets himself in his study wearing noise blocking headphones. Meanwhile, Uriel and his wife Dikla (Alma Zak) hold each other in bed as he contemplates his father. Uriel may seem like the more likable and sensitive man, but we can see there is a lot of his father in him as well. A new colleague is warned to keep on his good side, that Uriel prefers a constant stream of flattery or can become vindictive. Uriel spits and sputters over his own college aged son, Josh's (Daniel Markovich), inability to take responsibility for his own path in life. Three generations cannot really see each other for the roadblock of their own projections. And yet prideful as he is, Uriel, who has looked to his father as an ideal all his life, is thrilled to hear the old man is finally being granted the Israel Prize. What's so compelling about "Footnote" is how Cedar reflects Talmudic ideas onto the Shkolniks's family problems. Josh notes that the Talmud declares that offering hospitality is paramount, then asks his father if, therefore, hospitality is more important than the Sabbath. Uriel is given his own whopper of a seeming contradiction when he's called to a meeting by his father's worst enemy, Grossman, to learn that the Minister of Education's office called the wrong Shkolnik. And when Uriel bows to Grossman's conditions upon granting Uriel's wish, his father uncovers his subterfuge using the same study techniques which pointed him to that Middle European Talmud. Despite the intensity of betrayals, lies, pride and hurt going on in this father/son tale, Cedar keeps his touch light. We see three generations in one long row at a live performance of "Fiddler on the Roof." Uriel's meeting with the Israel Prize committee is held in a ludicrously small room, almost a filing cabinet, which its participants work around without commenting upon. Cedar's film would make a great double bill with the Coen Brothers' "A Serious Man." Perhaps the greatest take away from "Footnote" is to witness all the envy, pettiness and competition among men studying sacred religious texts. As a mentor, Eliezer appears happier telling his student why she is wrong than praising her work. The essence of what is being studied is obscured by the methodology of studying it.