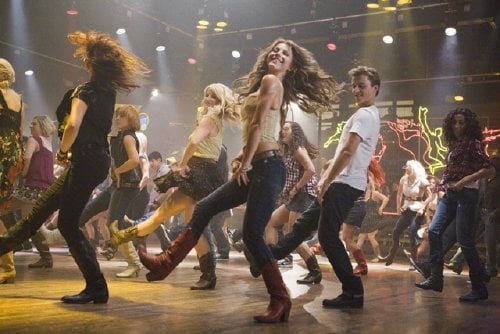 After being abandoned by his dad and losing his mother to cancer, high school senior Ren McCormack (Stoughton's Kenny Wormald, a Justin Timberlake backup dancer) moves from Boston to Bomont to live with his Aunt Lulu (Kim Dickens, HBO's "Treme") and Uncle Wes (Ray McKinnon, "The Blind Side," "Dolphin Tale"). He quickly makes friends with Willard (Miles Teller) who tells him about the town's wacky laws that forbid loud music and dancing. Those laws are quickly flouted when he draws the attention of the preacher's rebellious daughter Ariel Moore ('Dancing with the Stars' Julianne Hough, "Burlesque") with his fancy moves in "Footloose."

Cowriter (with the original's Dean Pitchford)/director Craig Brewer ("Hustle & Flow") attempts to update the 1984 hit that starred Kevin Bacon and has made a pleasant enough toe-tapper, but simply adding a tragic car crash as a prologue to the film fails to make it newly relevant to today's audience. Other than that and the accommodation of Wormald's native accent making him a Boston vs. Chicago transplant, the 2011 "Footloose" is a pretty faithful remake. The film's best asset is Miles Teller, so good as the guilty teenager of "Rabbit Hole," as the lead's instant best buddy. At first, it seems like Ren's uncle's going to be a problem what with his calling out his nephew for dropping the 'Unc,' launching into grace at dinner and denying the boy a job at his used car dealership. But Wes is the one who gave up his office (a glassed in affair that puts Ren in a fishbowl, just as he is in Bomont), got him a job at the cotton mill and gives him a real 'fixer upper' of a VW. With a hand held rope subbing as a gas pedal and the type of loudspeakers usually mounted on a building exterior installed under the car's hood, just guess what Ren gets pulled over for - that's right, his music is too loud. He draws further attention by dancing with Ariel at the drive-in - and by abandoning her when he realizes he's being used to make local racer Chuck Cranston (Patrick John Flueger, TV's 'The 4400') jealous, but she's persistent and soon he's challenging the city council, led by high school principal Roger Dunbar (Brett Rice, "Super 8's" sheriff), to repeal the town's ban on dancing. His use of the Bible and general good guyness turn around Ariel's dad, Rev. Shaw Moore (Dennis Quaid, "Soul Surfer"), who gives his blessing to throwing a prom outside the town at the cotton gin. Anyone over the age of ten will really have to suspend disbelief to buy half of this. Even in Brewer's prologue, one's distracted by the lack of bodies in a car that previously held five as it hits a truck. Anyone's who's not an obvious bad guy is a little too good with the exception of Ariel, caught in the middle since her older brother Bobby died in that crash. And of course, all the teenagers in a town that's banned dancing for the past three years can dance like the dickens. Except Willard, that is, to allow for some good-natured dancing lessons (the original's 'Let's Hear It for the Boy' is pulled out on a Barbie karaoke machine with Wes and Lulu's two young girls as accompaniment for the guy to lose his cool with). McKinnon isn't quite good looking enough to come out of nowhere and grab a lead, but he's got a natural presence and certainly can dance. Hough has that distinctive high yet husky, cracking voice and clear blue eyes and can work a drive-in speaker pole. Teller takes the whole film and runs and deserves a bigger break than this - the guy's done a 180 on his previous teen role and couldn't have been better in either. Also good is McKinnon, who gives cracker expectations and smoothly counters them. Quaid and Andie MacDowell ("Four Weddings and a Funeral") take the Lithgow and Weist roles and Ziah Colon is fine as Ariel's best friend, one of Sarah Jessica Parker's early parts.