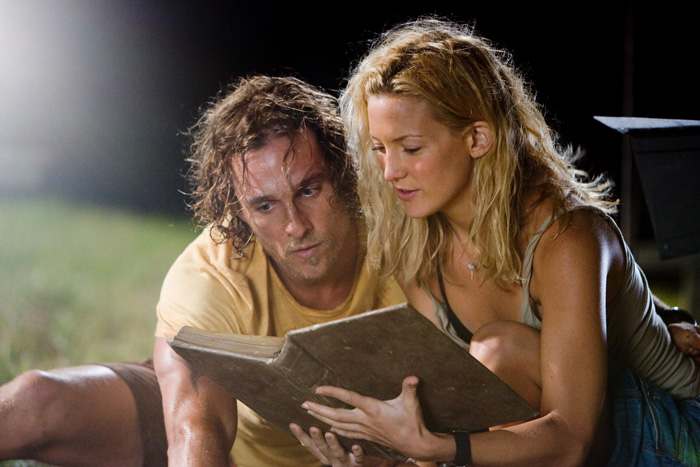 Ben 'Finn' Finnegan (Matthew McConaughey, "How to Lose a Guy in 10 Days") has driven wife Tess (Kate Hudson, "How to Lose a Guy in 10 Days") away with his obsession of finding the Queen's Dowry, 40 chests of Spanish treasure lost in eighteenth century seas. But her new job, working aboard billionaire Nigel Honeycutt's (Donald Sutherland) yacht, proves convenient to Ben who exasperates his wife by ingratiating himself to both her boss and his celebrity daughter and endangering them all with the gangsters also in pursuit of "Fool's Gold."

The prospect of seeing another pairing of Kate Hudson and bland bongo boy Matthew McConaughey wasn't exactly inspiring, but then "Fool's Gold" is directed by Andy Tennant, who's done some pretty decent romantic comedies ("Ever After," "Hitch"). The heart sinks again when one discovers that "Fool's Gold" was written by the team behind "Anacondas: The Hunt for the Blood Orchid," although that film had its cheesily cheeky moments. So, the verdict? A few nice gags, stunning Caribbean locations and a decently executed three-pronged climax help offset the over-the-top bits and the humdrum. It's like "The Deep" given a romantic comedy makeover. The opening sums up the film. As Finn and partner Alfonz (Ewen Bremner, "Trainspotting," "Death at a Funeral" sift through the Caribbean sand tens of feet underwater, their generator on their boat above sparks a piece of paper that floats about, eventually setting the thing ablaze. The generator dances off the deck and sinks behind the oblivious duo who only realize something is amiss when their vac stops sucking. On the shore, Cordell (Malcolm-Jamal Warner) and Curtis (Brian Hooks) lie on lounge chairs peering at the flaming scene through binoculars. The boat sinks, like the generator, Finn and Alfonz surface and wonder what's up. Tennant's staged the whole thing beautifully, but then Finn and Alfonz converse and we get an aging, vacant pretty boy and a lousy Lithuanian accent. Come to find out, Cordell and Curtis are thugs on the payroll of Bigg Bunny (Kevin Hart, "Barbershop") who owns the island and was bankrolling Finn, who now owes him a lot of money. Meanwhile, offshore, Tess has eased into her new post as a steward aboard the Precious Gem and has convinced its owner to anchor for a day so that she can go ashore and procure a divorce. When Finn cannot convince her to change her mind, he comes up with another plot, 'saving' Honeycutt's daughter Gemma (Alexis Dziena, "Broken Flowers'" Lolita), earning her and the bewildered Nigel's gratitude. Nigel, who has been trying to suss out his new steward's background in his own vaguish way (Sutherland plays this part as if he's always just been woken up from his nap), finally sees her intellect on display as Finn tells the tale of their long partnership hunting the Queen's dowry treasure and lets Gemma decide on whether to spend the next week bankrolling a treasure hunt or moving on to meet up with some friends. And so the race is on between Finn and Bigg Bunny, who partners up with Finn's old colleague Moe Fitch (Ray Winstone, "Beowulf," "The Departed"), then brings in the ruthless Cyrus (David Roberts). There's an odd subplot about Nigel trying to win over his bimbo daughter that culminates is a truly endearing scene when she makes the connection between her own name and the yacht's name and the film is to be credited that she is never used as a romantic wedge between Finn and Tess. McConaughey may be showing his age in his face, but his bod's plenty buff (and given much screen time) and while he gives no depth beyond the irresponsible stud he's playing he does exhibit some pretty fine physical chops, doing a great comedic underwater bit with an anchor and some derring do moves. Hudson makes Tess level-headed without making her a killjoy. Dziena's Gemma is such a ditz you'll roll your eyes at first, but she's got a killer smile and little girl lost appeal that eventually wins one over. The film's climax, at the Clifton Point blowhole, then on a seaplane, has a real energy to it even if the getting there drifts and sometimes drags. "Fool's Gold" never aspires to much, but it's easy on the eyes, a vicarious Caribbean vacation, a beach read on a rainy day.