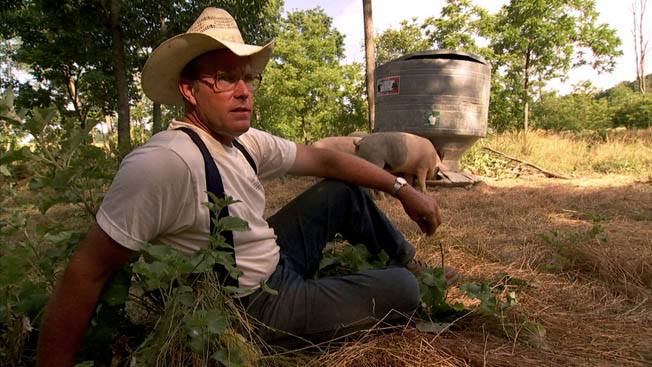 In the 1970s, there were thousands of meat packing plants, large and small, across the United States. Now, there are 13 and all are owned by giant, multinational food conglomerates that have an iron grip not only on the industry but also on each and every one of our lives. TV documentary filmmaker Robert Kenner takes us into the bowels of this rapidly expanding industry to show just how things like diet and health have changed for the worst because of the greed of “Food, Inc.”

Director Robert Kenner (PBS's "The American Experience") uses voices both familiar (Eric Schlosser, writer of "Fast Food Nation," sustainable food activist Michael Pollan, author of "In Defense of Food") and not (Stonyfield Farm's Gary Hirshberg, activist Barb Kowalcyk) in his examination of how food is produced in America today. If this documentary does not change your mind about how to procure the food you eat, nothing will. The film discusses how the farm has been replaced by factories and how a few major corporation determine how food is produced. It's all a backlash from MacDonald's and its assembly line approach to preparing restaurant meals and the facts will sicken you. Kenner never goes for the shock approach used by some animal welfare groups (although some images - a terrified cow being 'herded' with a forklift, baby chicks being dropped down a chute like so much product - are indelible), instead getting his point across by informed discussion of the facts. Why is it that today, with modern technology, so much of our food is becoming contaminated by e coli? The answers are surprising. Companies like Tyson and Monsanto have ripped control of farms away from the farmers. In Monsanto's case, they have made it illegal for farmers to save seed from patented crops and their tactics in enforcing this are ruinous (this piece of the story has been told before, and arguably better, in last year's "Flow"). Chicken farmers who take a stand against inhumane practices, like chicken houses devoid of any light, are put out of business. Smithfield employs illegal Mexican workers to produce meat inexpensively, then colludes with local police to raid their homes and deport them. Then there is the voice of reason, the most eloquent belonging to Polyface Farms' Joe Salatin. His sustainable, organic farm produces healthier, tastier food and he claims to be no less efficient than the factories. His employees and animals are treated with respect. A point that is made repeatedly and well is that consumers tend to think that organic foods are expensive, when what should concern them is why mass-produced supermarket foods can be so cheap. The U.S. Government also has a major hand in all this, subsidizing foods for all the wrong reasons. Corn is sold cheaper than it costs to produce and is now in 90% of the foods we eat. Why is this bad? You'd be surprised. (This subject was also investigated in 2007's "King Corn.") Former corporate food execs dot the political landscape. The FDA performs less than a tenth of the inspections than they made thirty years ago (although this fact begs the question of whether that is because there are so many fewer production sites). "Food, Inc." not only lays out a vast array of information for the consumer to make his own informed decision, it offers ways to combat the horrible practices currently in place. The best of these - 'Buy only from those who treat their workers, animals and the environment with respect.' The documentary may rehash work that has been presented before, even in such commercial features as "Fast Food Nation," but it covers more ground than its predecessors.

First-time documentary feature filmmaker Robert Kenner takes no prisoners with his scathing indictment against the giant corporations that now dominate the food industry. Purdue, Tyson, Smithfield and Monsanto are four of the major players that have a stranglehold on the food we eat. Their claims of producing “farm fresh” food is anything but. Instead, their farms are gigantic factories that care not for the creatures they genetically alter to bring to market as quickly as possible – to increase profits at the cost of the public’s health and well-being. The list of horrors perpetrated by the mega-corps is shocking in both scope and variety. The genetic engineering of the meats, fruits, vegetables and grains has spawned the patenting of these products by these corporations and results in them owning the commodities that were once something that everyone could grow as they wished. Not so anymore. Now, any farmer that tries to use these patented products without corporate permission faces massive litigations that they cannot win. These corporate pockets are deep and inexhaustible and not very likely to lose the lawsuits. There are other distressing results to the engineering and chemical alteration of our food. Most prevalent and frequently in the news are the frequent outbreaks across the nation of e-coli and found in everything from the meats we eat to things including spinach contaminated with the bacteria. The massive increase in corn growing also has far-reaching ramifications. Thirty percent of the farmland in the US is used for the production of corn, making it the most common ingredient in nearly all the foods we eat. Corn syrup, corn starch and other by-products of that grain are all prominently displayed on food packaging as a principle ingredient. This also includes modified corn products (read: engineered). Another shocking finding is the corporate goal to grow our food faster, but not better. A farm-raised chicken used take about three months to go from hatching to market. Now, companies like Purdue have cut that time in half, producing poultry that is twice as big as before engineering took over. Again, though, not nearly as good or healthy as organically grown product. The health effects of these corporate foods are also fast becoming negative. It is cheaper for the average American to stuff themselves with fast food instead of spending (more) money on fresh produce. The results are disturbing statistics. For instance, of those born since 2000, one in three will suffer early diabetes due to obesity from poor diet. It is cheaper to buy a Whopper Jr. than a good size apple. There is light at the end of this disturbing tunnel, though. Organic food growing is one of the fastest developing food producing industries in the country. The difference in heart and mind of these organic growers is the diametric opposite of the corporate mentality. And, there products are better for you. Do not see “Food, Inc.” if you are planning to go out for a big, juicy cheeseburger afterwards.