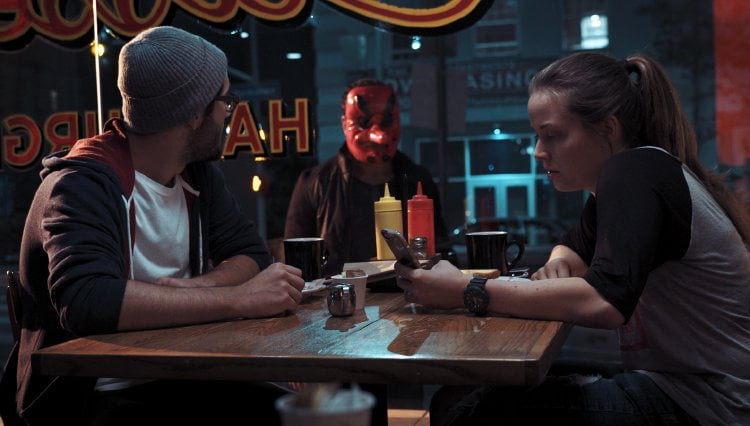 YouTube vlogger DropTheMike (Matthew Solomon) is thrilled when he’s offered a big infusion of cash if he can attract more people to his horror channel, so decides to pull out all the stops and spend the three nights leading into Halloween at L.A.’s haunted Hotel Lennox, the site of 123 murders and suicides since 1927. He’ll be accompanied by his faithful editor Nic (Caitlin Utting) along with the sound person, Danni (Sam Valentine), he’s used as bait to convince his spooked DP Chris (Tim Drier) to come along.   The footage we are about to see was removed from social media and is now only available to watch on the dark web, we are told, in “Followed.”

Director Antoine Le has made a found footage film that eschews the video look by making his protagonist a wannabe professional.  If the title “Followed” makes you think of those Facebook horror flicks, you’ll also be surprised to learn that this one doesn’t keep us within the confines of a social media page either.  “Followed” is more like “Paranormal Activity” crossed with Ty West’s “Innkeepers” with writer Todd Klick adding a psychological twist.  Pay attention when Mike and Chris are asked how they first met.

This one’s claim of having been based on true events is also more valid than most.  “Followed” is based on the same hotel, The Cecil that inspired ‘American Horror Story: Hotel.’  The Night Stalker, Richard Ramirez, was one of two serial killers who lodged there, here fictionalized as David Olmos (Ethan Alexander).  The Cecil Hotel (now rebranded Stay on Main after a refurbishment) was also where Elisa Lam’s body was found in a water cistern on the roof after security camera footage showed her oddly entering and exiting the elevator multiple times.  Screenwriter Klick calls her Meghan Kim (Sarah Chang) and supports the theory that she was playing The Elevator Game, an urban legend where a lone rider going to a sequenced series of floors can arrive in another dimension.

Solomon invests Mike with just the right level of obnoxious showbiz enthusiasm for the ghoulish stories he brings to his audience, like the bit he does on the Pasadena Suicide Bridge’s most famous victim.  One wonders what his fiancée Jess (Kelsey Griswold), a nurse who claims not to like his work, sees in him (she’s there to add weight to a third act plot twist).  Nic, who works in his garage, reacts to his antics with a raised middle finger.

Once in the hotel, where Mike taunts Chris with news that he’ll be staying in the very room where Olmos cut up his victims in the bathroom, the team scopes the place out, testing a new drone camera from the hotel’s roof.  That night, with a camera left on “Paranormal Activity” style, Mike, Chris and Danni sleep while the door to their room opens and the bathroom light goes on.  It is unclear why they never look at the footage the next day, perhaps having expected editor Nic, in the next room with her equipment, to have done so.  The prop mascot, ‘Fred the Head,’ which fell from a shelf for no reason earlier in the evening, reportedly really did so during the shoot.

As Mike makes bolder and bolder moves to drive his numbers up, playing The Elevator Game and making a deal with Tony the Security Guard (Christopher Martin) to access prohibited areas, the increasingly freaky goings on send his crew packing in one way or another until, alone, Mike confronts his own demons.  Le and Klick add a wickedly witty ironic coda to send us on our way.

“Followed” delivers genuine creepiness without leaning on gore and a more polished look than we’re used to from found footage films.  Character and relationships are essential to the story.  References to other films are more organic homage than cheap rip-off (“The Shining’s” rolling ball, “Lost Highway’s” vibrating heads).  And yes, that is "The Deer Hunter's" John Savage as book author Wallace Fleischer.

"Followed" is playing at the drive-ins listed here.  It will be released digitally later in the summer of 2020.