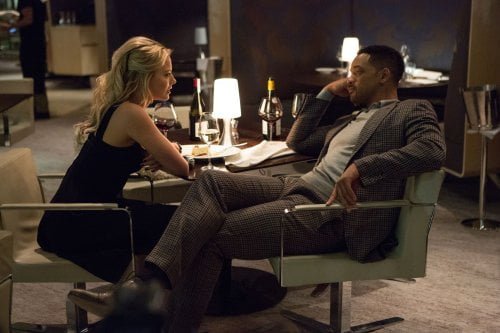 Although he taught Jess (Margot Robbie, "The Wolf of Wall Street") everything about the art of the con, when he runs into her three years after their breakup in Buenos Aires, where he's running his latest play on the race car circuit, Nicky (Will Smith) loses his all important "Focus."

Writer/director Glenn Ficarra & John Requa's (“Crazy, Stupid, Love”) latest is a little bit "Now You See Me," a little bit "Out of Sight." Starring a more world weary Will Smith than we're used to seeing, the actor carries a weight beneath his surface charm that's appealingly sexy while up and comer Robbie brings an energetic brightness. The story's New York, New Orleans, Buenos Aires three act structure features three major cons, each ending with a twist, and while the film is never as clever or as deep as it thinks it is, it's a briskly paced entertainment in high roller settings. In a wintery New York City, Jess approaches Nicky in a high class restaurant, asking to be 'saved' from the man who's been pawing her at the bar. She's attempting a minor league scam and Nicky's onto her from the get go. When she realize just who he is, the son of one of the most famous con artists in the business, she begs to become his protege. After a lesson on human nature and misdirection from Nicky and some quick pickpocketing run throughs orchestrated by his right hand man Horst (Brennan Brown, "I Love You Phillip Morris"), she's declared a natural and added to the team. Jess has also become romantically involved with Nicky, almost by default. In a New Orleans gearing up for the Super Bowl there's plenty of flash and cash for Nicky's team to prey on and they rake in over a million, but as they prepare to close up shop Horst issues a warning that proves prophetic when Nicky gets embroiled in escalated betting with billionaire businessman Liyuan (BD Wong, "Jurassic Park," HBO's 'Oz'). Jess is shocked by the trip's outcome, but not as shocked as Nicky will be when she appears in new, sleeker and more sophisticated form three years later on the arm of his mark, Rafael Garríga (Rodrigo Santoro, "Love, Actually," "300"), a racing car owner. So who's conning who? Can true love grow between two people who are skilled in getting people to trust them for their own ill gotten gains? Nicky's character is painted as emotionally stunted by a father who regarded him as too soft for the business, but Jess's background is left ambiguous, a woman using her natural gifts to get by in the world. If the initial cons seem low rent, they're merely subterfuge and funding for bigger scores, a psychological one involving hotel chandeliers and the Rolling Stones' 'Sympathy for the Devil' and the final one that Nicky's told Jess is a mere fantasy. When we hear about the 'Toledo panic button' maneuver early on, rest assured it will make a climactic comeback. There's some disconnect amidst the various plays, a lack of consistent modus operandi, but the cast and locales elevate the material. Support is particularly fine. BD Wong's gleeful high-stakes seduction is a sharp bit and Santoro's pampered playboy has an edge of real danger. Brown is a deadpan stabilizing factor while Adrian Martinez ("American Hustle") adds all kinds of warmth and naughty humor as Farhad, Nicky's '500 lb. Persian.' The film also stars Gerald McRaney (TV's 'Major Dad,' 'House of Cards') as Garríga's fearsome enforcer Owens. "Focus" is a nice bounce back for Will Smith, who proves here that he's still got leading man appeal while Margot Robbie once again shows she's got what it takes to play with the big boys. Grade: