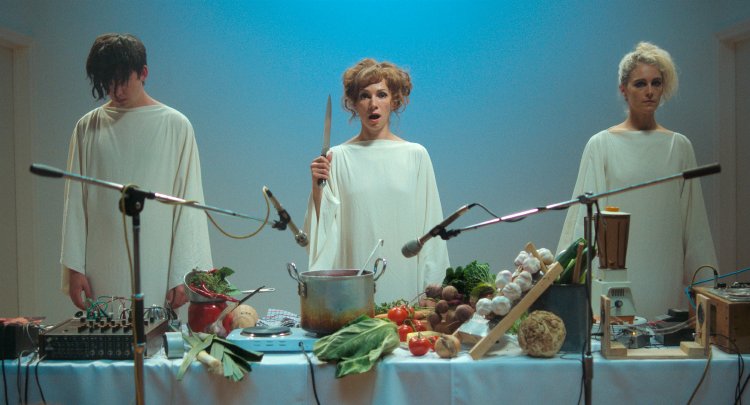 When a three member collective is granted residency at the Sonic Catering Institute by its head Jan Stevens (Gwendoline Christie, "In Fabric"), they must contend with giving after dinner speeches, attempts at sabotage by the rejected Mangrove Snacks collective and Stevens’ notes on their performances.  They are interviewed separately and tailed collectively by the Institute’s ‘dossierge’ Stones (Makis Papadimitriou, "Chevalier"), whose undiagnosed gastrointestinal issues are seized upon by Elle di Elle (Strickland regular Fatma Mohamed), the collective’s leader, for additional performative authenticity in “Flux Gourmet.”

Writer/director Peter Strickland ("Berberian Sound Studio," "In Fabric") is a true auteur, his unique works examining power balances in small Romanian villages, Italian movie studios, lesbian lepidopterology and an English department store and delivered with bizarre vintage style, kinky sex, ornate formal language and a predilection for all things Greek.  His films are often creepy if not downright horrific yet can also be perversely funny, both the case with his latest, a film that’s had me breaking out in giggles for the last 24 hours.

After seeing the film, it may be hard to imagine, but this may be the Englishman’s most autobiographical film, himself a member of The Sonic Catering Band.  While commenting upon everything from how funding compromises artistic integrity to band member squabbles, Strickland also makes a serious case against the marginalization and humiliation of those suffering from coeliac disease, while still being absurdly amusing.

The film opens with Stones in consultation with the Institute’s Dr. Glock (Richard Bremmer, "In Fabric"), the very picture of British villainy.  After complaining bluntly about Stones’ halitosis, pulling back in shock over his flatulence, then berating the self-professed hack writer for not having read Hippocrates, the doctor declares ‘Let food be thy medicine.’  Stones, whose around-the-clock documentation of Elle’s collective requires that he sleep in the same room, spends a lot of time trying to muffle sounds in the bathroom and slipping out of rooms to (always silently) release gas.  By the time the collective arrives at their final performance, his stool sample will have been become a prop and his colonoscopy staged in public.

Meanwhile, after the first group dinner, Elle establishes her collective’s theme as ‘male domestic oppression’ by reading ‘the 10 Commandments of the kitchen’ from a 50’s era cookbook in her after dinner speech, interrupted when a slaughtered terrapin thrown threw a glass window by the Mangrove Snacks, lands in the soup tureen, a scene right out of the Mad Hatter’s tea party.  Jan admits that it was the group’s terrapin terrorization which led to her rejecting them in favor of the vegetarian collective.

The group’s first performance, in which a naked, blood-smeared Elle recreates pig slaughter by banging a microphone into her forehead like a bolt gun, is marred by Billy’s (Asa Butterfield, "Hugo") sound engineering error, leading to a fierce battle between Elle and Jan over Jan’s note to lower the flanger which escalates into Elle accusing Jan of sabotage and Jan seducing Billy by indulging his fondness for nipple twisting, the subject of his after dinner speech which enraged Jan for undermining her agenda.

The film also stars “The Souvenir’s” Ariane Labed as the third collective member Lamina and “In Fabric’s” Leo Bill as the technical assistant who discovers Elle’s scatological deception.  The locations vary from the lush exteriors of a country estate to its fussy interior living spaces and blank performance spaces.  The score consists of harpsichord and ethereal female vocals.  “Flux Gourmet” is a must for fans of Strickland, but may prove a difficult entry point for those unfamiliar with the filmmaker’s work.  ‘You make keep the epicurean toxicity, but indulge me on the flanger please.’

IFC Midnight's "Flux Gourmet" is available in theaters and on demand.