Flow: For Love of Water 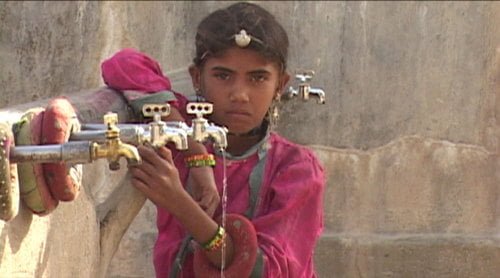 Water is the source and essence of life on this earth. It should be readily available to all the citizens of the world but documentary filmmaker Irena Salina lays out a though-provoking and disturbing chronicle about corporate greed that makes the aqua conglomerations hundreds of billions of dollars from that thing that, at one time, considered the right of all in "Flow: For Love of Water."

Last year, director Laura Dunn astonished audiences with her "The Unforeseen," a poetic yet informative essay on how housing development in Austin, Texas severely impacted the area's water supply. Now French director Irena Salina (the niece of Phillipe Noiret) goes global, exposing the brink of calamity we face with our most precious natural resource. Leaving no stone unturned, Salina looks at pollution from multiple angles. Did you know we have rocket fuel in our water? That the drugs we take end up back in the water supply (FIFTY percent of the fish in Alaska were found to have measurable levels of Prozac in them!)? That 40% of flus and stomach viruses are directly attributable to drinking water and that millions die each year due to lack of potable water? That we face a higher risk of water pollutants from contact through the skin while showering than drinking? Which leads of course to the one billion bottled water industry, a sham of the highest order. Even worse is how globalization and the World Bank have stepped in to provide drinkable water to the poor who have lost water sources due to dams and development - at a cost. Most of these people cannot afford to pay for what used to be free and so return to the polluted lakes and streams. "Flow: For Love of Water" is astonishing in the amount of information packed into its lean ninety-three minute running time. Salina documents in the U.S., France, China, India, South America, uses the requisite talking heads, animations and even the comedy duo of Penn and Teller to convey her urgent message. This is a message that must be heard and Salina makes it enthralling (and frightening!) to listen to.