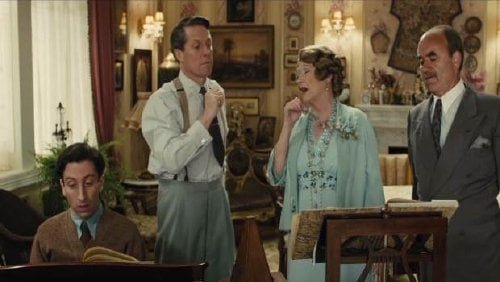 In 1944 New York City, British Shakespearean actor St. Clair Bayfield (Hugh Grant, "Love Actually") gives a plummy reading from Hamlet at the Verdi Club. But his American socialite wife is eager to take the stage and he's cut short. The fawning members of her club applaud the tortured warblings of the woman who believes their reception is justified, "Florence Foster Jenkins."

Dipping back into the period show biz and theatricality of his "Mrs Henderson Presents," director Stephen Frears ("The Queen," "Philomena") brings the second adaptation of the singer prized for her unintentionally hilarious performances to the screen, this time starring Meryl Streep. (Xavier Giannoli's French version, "Marguerite," starred the more affecting Catherine Frot.) It's great fun, Streep padded like a battleship, decked out in outlandish yet matronly costumes, abusing our ears to her own merriment. British television writer Nicholas Martin's screenplay is more faithful to the true story, which adds deeper and deeper layers to Jenkins' character as the film progresses, a seemingly silly historical footnote becoming something much more tragic. By the end, even Florence's dumbfounded pianist, Cosme McMoon (Simon Helberg, "A Serious Man," TV's 'The Big Bang Theory'), is won over by the woman he initially disdained. St. Claire dotes on his wife, tenderly removing her wig and eyelashes after her performance, ensuring legitimate press do not attend her recitals (tickets are 'for true music lovers only') and that no one sits on her chairs that 'are not for practical use.' When Cosme wins the audition as her pianist, he is told that she abhors pointed objects but loves sandwiches and potato salad (which is prepared by her maid in the bathtub to feed the throngs who come to hear her sing). Cosme is impressed when he sees Arturo Toscanini (John Kavanagh, TV's 'The Vikings') leaving her apartment, but the maestro, like Cole Porter (Mark Arnold), offer lip service in order to sidle up to her social contacts and wealth. It is at a Toscanini concert with opera star Lily Pons (opera singer Aida Garifullina) at Carnegie Hall, that an idea is planted in the back of Florence's mind. Streep embodies the kind but delusional woman who really did love music (Jenkins was a pianist prodigy before nerve damage ended that ambition). She incorporates the self-centered, shielded from reality mindset of the very rich while still remaining sympathetic. Grant is strong support in Bayfield's support of his unusual wife, his romcom tics held at bay. We believe in his utter devotion, even when it is revealed that he lives separately with hidden lover Kathleen (Rebecca Ferguson, "Mission: Impossible - Rogue Nation"), a situation made more understandable by a shocking revelation in the film's third act. Equally good is Helberg as the film's most slapstick comic relief. His exaggerated reactions amidst lunacy are priceless, yet he also accompanies Streep in the film's most moving scene when she visits him in his lowly digs, letting him in on ironic secrets and accompanying him in a Chopin piece, a true communion. In a small role as Agnes Stark, the crass wife of a monied businessman, Nina Arianda ("Win Win," "Rob the Mob") channels Judy Holliday. The film also stars Christian McKay ("Me and Orson Welles") as the NY Post reporter trying to scoop a Jenkins performance. The production is stagey, most scenes taking place in apartments and halls, street exteriors feeling like dressed studio lots. The film climaxes with a raucous Carnegie Hall performance, 1,000 GIs, mostly drunk, invited by Florence as a supportive gesture. Its aftermath proves devastating. Frears closes with an inspired idea, Florence imagining her own performance as only she hears it, Meryl's real singing voice free to soar at last. At heart, the movie tells a sad story, but Frears and his cast keep us laughing while getting at the complexity that was "Florence Foster Jenkins." Grade: