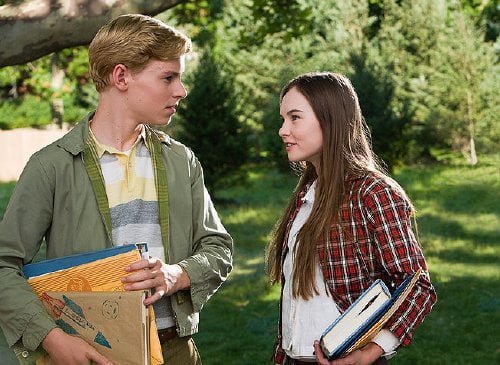 In 1957, during the summer between First and Second Grade, Bryce Loski (Callan McAuliffe) moved to a new neighborhood. He wasn't even out of the moving van before the little girl across the street, Juli Baker (Madeline Carroll, "Swing Vote"), began to shadow and annoy him. Funny thing, though - years later as thirteen year olds after he shoved his relationship with another girl in her face, failed to support her crusade to save a tree and insulted her and her family, Bryce found that his feelings for Juli had "Flipped."

Cowriter (with Andrew Scheinman, "Bait")/director Rob Reiner began his career with such notable films as "The Princess Bride," "This Is Spinal Tap," "Stand By Me" and "The Sure Thing" but has been limping along lately with meager fare like "Alex & Emma," "Rumor Has It..." and "The Bucket List." "Flipped," adapted from the Wendelin Van Draanen novel, is a partial return to form. Part "Princess Bride" for its storytelling and grandfatherly influence, part coming of ager via romantic comedy pushpins, this 'He said/She said' look at a couple of kids' formative years has so much narration it's more illustrated book than movie, but it certainly is a cute read. The film is about 75-80% narration to 20-25% dialogue, perhaps because this was the easiest way for Reiner to continually rewind his story to give us the opposite side. Thankfully he has some good child actors under his direction whose facial expressions tell quite a bit. Young Morgan Lily ("2012") and Ryan Ketzner set the pace with the film's first two events where we learn Bryce is mortified by Juli's attention and she thinks he's just shy and has the most gorgeous eyes. Things ramp up when Bryce's grandfather, Chet Duncan ('Frasier's' John Mahoney), newly ensconced in the Loski home, takes note of the feisty girl across the street who reminds him of his lost bride. She's on the front page of the local paper for protesting the removal of the old sycamore tree she's spent part of every day in for years, bugging Bryce by calling out the approach of the school bus block by block. Things get more complicated when the entire Loski family is unwittingly drawn into the weird Juli/Bryce dynamic by debating the safety of the fresh eggs she's brought over courtesy of the hens she's raised since hatching them in her award winning science project. Bryce already has an egg phobia (he watched a friend's pet snake devour one whole, then regurgitate the shell) and his disgruntled dad (Anthony Edwards) looks down on the Loskis. Once salmonella enters the family dinner conversation, Juli's gift has become Bryce's albatross to deal with, which he does badly. The story is very well plotted, a series of events that never feel contrived as they continue to keep the protagonists on opposite sides of the fence. Eventually, the entire families are pulled in for added layering - Patsy Loski's (Rebecca De Mornay) generosity of spirit vs. her husband's prejudices, the Bakers's financial strain keeping Richard Baker's (Aidan Quinn) mentally handicapped brother Daniel (Kevin Weisman, TV's "Alias") in private care. Obvious assumptions turn out to be unfounded, fences pulled down that should never have stood in the first place, ironic commonalities uncovered. The story also neatly ends with a nice new beginning, one that, while obviously symbolic, is at least multi-faceted. Madeline Carroll was a revelation in "Swing Vote," only to follow up with a disappointing Jackie Chan vehicle. She's perfectly cast as the girl who's just odd enough that she could seem embarrassing, just plain enough that one might not see how really pretty she can be once you've gained her admiration. Relative newcomer Callan McAuliffe has the good looks that would get the girls and the actor walks that fine line between trying to fit in and questioning his own moral standards. It's almost disturbing to see stars De Mornay, Edwards, Quinn and Penelope Ann Miller, whose hay days were admittedly in the 80's and 90's, looking so middle aged here, but they're distinct with more than average shadings for these types of roles. But for any number of things that the filmmakers get right (the raffling of 'basket boys,' the innocence of mid 60's middle school jockeying, period music, costuming and art direction), there are a few quibbles. Juli uses the phrase 'visually challenged,' a 'PC' style of talk that didn't exist in 1963. Her older twin brothers Mark (Michael Christopher Bolten, "Letters to God") and Matt (Shane Harper) have musical ambitions and great Everly Brothers style harmony, but the filmmaker pushes "She's So Fine" so high on his soundtrack under Carroll's narration they fight each other. When those 13 year old girls bid on their male classmates and their picnic baskets, $15 is the average win - a huge amount of disposable money for a child back then, even if it was targeted toward charity. But those are quibbles, and, the inordinate amount of narration aside Reiner's gotten good performances all around. The kids are all real (note Israel Broussard as Bryce's best friend Garrett, Ashley Taylor as Juli's girlie romantic rival and Matthew Gold as Eddie Trulock, the inauspicious 'basket boy' Julie bids for). Parents aren't relegated to the 'wah-wah-wah' of Charlie Brown strips, but have their own inner live and relationships. The film has been photographed in a straightforward manner, but it allows one's eye to roam and note the little details, like silhouette artwork, that baby boomers will remember from their or their friends' homes. "Flipped" is a sweet piece of nostalgia that covers a myriad of social topics within its adolescent romantic comedy. It's Reiner's best film since the mid 90's.