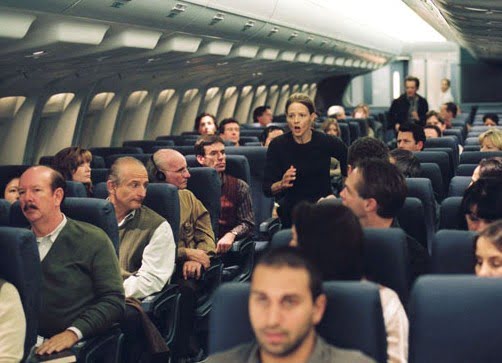 A mother and daughter board a plane for a long, sad journey from Berlin to New York after the accidental death of their husband/father. Kyle (Jody Foster) and Julia (Marlene Lawston) nap during the flight but when the mother wakes, the child is gone. Frantically, she calls upon the flight crew to find the girl and the plane is searched from nose to tail. The only problem is, no one remembers the little girl boarding with her mother in “Flightplan.”

German director Robert Schwentke has created a taut, suspenseful psychological drama…for the film’s first hour. Then, “Flightplan” deflates like a punctured blimp into a routine and silly action thriller that has plot holes that the story’s jumbo jet could fly through. We first meet Kyle Pratt as she sits at a Berlin subway stop. The anguished look upon her face is there for a reason – she is on her way to the city morgue to retrieve the body of her husband, killed in an accidental fall, to be delivered to New York. Now, she must pack up their belongings and, with six-year old Julia, return home to bury her spouse. The dreadful accident has traumatized Julia and Kyle promises to hide the little girl under her coat all the way home if she wants. The pair are the first to board the plane, an A474, the largest passenger plane in the world that Kyle helped design, and they settle in as hundreds of other passengers bustle about. The two are in their own world as the grief they share washes over them as they prepare for the long trip home. On a whim, Kyle suggests that they take over a couple of vacant rows in the back of the plane so they can nap. The mother awakens a few hours later only to discover that Julia is missing. Frantic, she begins to search everywhere but the little girl is nowhere to be found. The tension builds very well for the film’s first hour as Kyle, the propulsion engineer involved in the jumbo jet’s engine design, drives the flight crew to help and searches the plane with a steadily building fear that Julia was taken from her. The crew, led by its pilot, Captain Rich (Sean Bean), is sympathetic at first and help Kyle with her hunt for the child. But, they soon learn that there is no record of the six-year old having boarded the plane and she is not on the passenger manifest. It doesn’t help matters that none of the crew or other passengers remembers seeing the girl with her mother. This portion of “Flightplan” actually keeps you on the edge of your seat. You know that Kyle has suffered a deep trauma with the loss of her husband and you start to wonder if Kyle, who is taking anti-anxiety drugs, is delusional and imagining Julia. Evidence piles up to confirm this theory but Kyle steadfastly insists that she is not crazy and her daughter was really taken by somebody. In typical post-9/11 fashion, a maguffin is put forth involving a group of obviously Arab men who act suspiciously shifty, fortifying Kyle’s belief of abduction. As this plot thickened, I wondered just where the heck the filmmakers, with the story by Peter A. Dowling and Billy Ray, were going to go. Would we see Kyle sink deeper and deeper into psychosis? Would her fears be founded? Schwentke and company does a decent job of keeping you guessing. Then the bubble bursts and the real plot unfolds. I’m not going to go any further with this since it would give away what should be, but isn’t, a thrilling thriller. The last half hour of Flightplan,” though, does not come close to meeting the tension and suspense so carefully built up in the beginning. At an 88-minute runtime, the thriller is too long. It is unfortunate that the expectations so well set up in “Flightplan” are unmet. This is a first class film, technically, with an incredible production design, by Alexander Hammond, that creates a world within a world aboard the mythical A474. The airplane is so huge, with its multi-levels and numerous nooks and crannies, it is believable that Julia could be lost or spirited away. The enormous vessel is a character unto itself in the film. Mega-star Jodie Foster is a terrific actress and expertly conveys the fear and anxiety when her daughter turns up missing. Cinematographer Florian Ballhaus captures this in frequently used extreme close-up of the actress’s anguished and angry face as Kyle goes about her frantic investigation. It is too bad that the story fails to come up to the level of Foster’s acting ability. The supporting cast does a yeoman’s job with Peter Saarsgard as Air Marshal Gene Carson, the man who tries to help Kyle but is concerned with the aircraft’s security. His character goes deeper than this and, conversely, more shallow, too. Sean Bean, a busy actor this year with roles in “The Island” and the upcoming “North Country” and “Silent Hill” is convincing as the ship’s captain who is both sympathetic and suspicious to the frantic mother’s plight. Erika Christensen (you’ll remember as Michael Douglas’s problem daughter in “Traffic”) is all grown up as empathetic flight attendant, Fiona. Australian actress Kate Beahan is initially effective as chief flight attendant Stephanie but is hung out to dry with the film’s silly climax. The trailer for “Flightplan” does a solid job of building up the story’s suspense and does not give the climax away, an unusual thing in the typical Hollywood marketing machine. If the film had met the expectations so well laid down by the advertising campaign, we would have a top-notch thriller on our hands. But, the ball was dropped and “Flightplan” should have taken a different course.