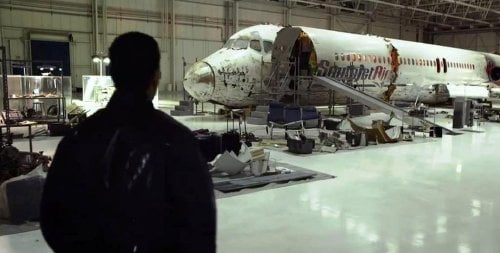 Captain Whip Whitaker's (Denzel Washington) been up all night on a booze, drug and sex binge with Katrina (Nadine Velazquez, TV's 'My Name Is Earl'), a flight attendant on the plane he now must fly from Orlando to Atlanta. After crackerjacking his way through hair raising turbulence to find a calm sweet spot, he must think on his feet when equipment failure sends him and his passengers into a dive. When he effects a miracle, the media begins to wonder why this presumed hero has taken "Flight."

Robert Zemeckis (the "Back to the Future" trilogy, "Forrest Gump") hasn't made a live action film since 2000's "Castaway," spending the past decade churning out a trio of motion capture animations. Funnily enough, he comes back with another film about a plane crash that sends a man on a (mostly) solitary journey. The film begins with an almost giddy sense of recklessness mastered by Washington's spot on performance of perhaps the ultimate functioning alcoholic before settling into a story about facing addiction that is sprinkled with too many untethered spiritual references. "Flight" is a good film anchored by a terrific performance and that early, orchestrated-to-a-fare-thee-well, flight sequence. Zemeckis opens on the debauched airline pilot amidst overflowing ashtrays, empty beer bottles and a naked woman. A phone call interrupts and lets us know he has an ex-wife and teenaged son he never sees. A line of coke is snorted and the director amps up the volume ("Feelin' Alright" on a punchy soundtrack) as does his star, who struts onto his plane behind aviator glasses and a uniform. Head attendant Margaret (Tamara Tunie, "The Devil's Advocate") doesn't seem to note anything amiss, but holy roller copilot Ken Evans (Brian Geraghty, "The Hurt Locker," "10 Years"), who's never flown with the man before, looks alarmed indeed. And yet, when the chips are down and the copilot looks more than alarmed for entirely different reasons, Whip almost seems to will SouthJet 227 into submission, bringing it down over a John the Baptist Pentacostal Mission Baptism taking place in a field, their chapel's steeple sheered off by its wing. When Whip comes to in a hospital, he learns from his pilot union rep Charlie Anderson (Bruce Greenwood, "Meek's Cutoff") that 96 of the 102 on board lived. Katrina was one of four crew members killed, unbelted trying to assist a young passenger. There's a parallel story being told in Whip's destination city as he hurtles towards it. Nicole (Kelly Reilly, "Eden Lake," "Sherlock Holmes: A Game of Shadows") approaches a friend trying to score some H. She's offered 2K to appear in the porn film being shot, but refuses. She's given a small bag with the warning not to use a needle and later, heedless, her dilated pupils are as aware as Whip's of death's door as she blacks out. These two meet in the hospital staircase, both going to sneak a smoke (Whip's gotten emergency supplies from his ever ready dealer Harling Mays (John Goodman, "Argo," entering to "Sympathy for the Devil"). Significantly, he refused the vodka). A third patient (James Badge Dale, "The Grey," making a big mark in a small role) arrives with gallows humor to talk about fate and God and so Whip tells Nicole he'll visit her. After an attempt at being sober on his dad's old farm, Whip slides off the wagon when he learns from Charlie and lawyer Hugh Lang (Don Cheadle, "Talk to Me," "The Guard") that the NTSB investigation has a blood sample that shows his alcohol level at .24, three times the cap for a DUI arrest. And while he's driving drunk, he just happens upon Nicole's street as she's being evicted. Timing is everything. Or is this the hand of God again? From here we follow two addicts, one already mightily convinced that she won't recover from her next slide and one who uses his addiction to wipe out the situation it's put him in, all while coping with an increasingly questioning media and Ellen Block (Melissa Leo, "The Fighter"), the investigator who will question him when she delivers her official findings. Washington is terrific going through all the phases of a recovering alcoholic - shame, denial, and finally acceptance. Screenwriter John Gatins ("Coach Carter," "Real Steel") has shown his predilection for inspiring stories, but this one is much, much darker, and he lets Whip stumble badly. As in the recent film "Smashed," he also explores the relationship struggles between an addict committed to recovery and another who is not. His religious agenda is heavy handed, though, always hovering overhead as a general statement yet not even so much as tied into AA's lore. Zemeckis caps his film with a gotcha of a climax, fooling us with a 'they couldn't be that dumb' moment (they're not), then sliding into home. The characters of Charlie and Hugh represent the two sides of the conundrum "Flight" presents to us, with Charlie being the moral side whose faith lies in preserving the public trust while Hugh gets Whip's blood test thrown out on a technicality and tells him how ten pilots in a simulation of the crash couldn't do what he did, all before Block's character lays out the story again, issuing a new challenge which defines Whip's future. "Flight" is a solid entertainment that tackles serious issues and raises complex questions.