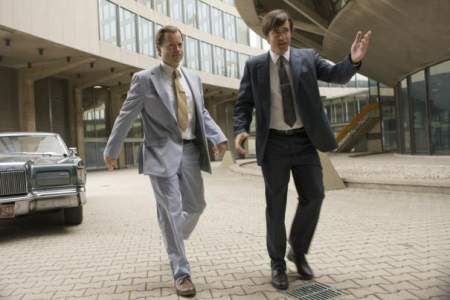 Robert Kearns is a college professor and basement inventor. Once he gets an idea, he does not give up. His latest invention, the intermittent windshield wiper, is groundbreaking stuff in the 1960s and Ford Motor Corporation wants to have a look. The 'look' turns into a 14-year plight as a David versus Goliath battle ensues between everyman Kearns and the corporate giant in "Flash of Genius."

In 1960's Detroit, Wayne State University Professor Bob Kearns (Greg Kinnear, "Ghost Town") raised six kids with wife Phyllis (Lauren Graham, TV's "Gilmore Girls," "Evan Almighty") and tinkered with ideas in his basement in the evenings. One rainy Sunday on the way home from church, Bob began to wonder why his car's windshield wipers couldn't act more like the human eye. After many stops and starts, Bob succeeded in creating what he called "The Kearns Blinking Eye Motor," his "Flash of Genius." If the idea about watching a David and Goliath story about the guy who invented the intermittent windshield washer sounds less than enthralling it's because, well, it's less than enthralling. "Flash of Genius" is a solid, by-the-numbers effort (the directorial debut of vet producer Marc Abraham) with a solid, by-the numbers grounding performance from Kinnear, but there is very little suspense about how things will turn out and Kearns's personal devastation during the course of his long battle with the Ford Motor Company is merely hinted at in a four year time jump. Abraham does a good job of presenting the kind of bustling large-family life endemic to 1960's church-going Midwesterners and the production design by Hugo Luczyc-Wyhowski ("Dirty Pretty Things") made me downright nostalgic for the era's textured wallpapers and hanging ceramic tschoskes. Kinnear and Graham effect a real marital bond, a romance still alive after the daily assault of six kids. Also of note is the intricate relationship between the naive Kearns and his long time friend Gil Privick (Dermot Mulroney, "The Family Stone"), a man already making millions by doing business with the auto industry. It is Gil who arranges for Bob to meet the men at Ford. Ford's design head informs him he's 'won the intermittent wiper race' and asks about unit costs. He and Lauren visit the local country club for the first time, guests of Gil and Frank at Ford (Daniel Roebuck). Kearns, always keeping his invention a family endeavor, brings the entire brood to look at warehouse space. Ford asks for the mechanism to bring before the U.S. Safety Board and a reluctant Bob, at Gil's urging, gives it to them. A few months later, Gil tells him Ford is no longer interested. A couple of years later, Bob sees a new Mustang with intermittent wipers. What follows are years and years of Kearns trying to get Ford to admit it stole his invention. He hires a hotshot lawyer, Gregory Lawson (Alan Alda, "Crimes and Misdemeanors," "The Aviator," doing what he does best), who seems to be on the same page until Bob refuses a hefty settlement with no trial. Bob suffers a breakdown, then, when he continues to work the case, his wife and family. A sinister Ford rep, Charlie Defao (Tim Kelleher, "Thirteen Days," "Matchstick Men"), shows up at Bob's new home in a much seedier part of town to pitch go away sums. Eventually Bob's children, now young adults, come back to the fold to help research the case. Bob, with inadvertent comical naivety, acts as his own attorney against Ford's best when his case is finally brought to trial. What's missing in "Flash of Genius" are all those in between gaps that define character. Where does Bob's ego end and a pure fight for justice begin? How does a strong union like the Kearns's continue on separate tracks? How does the son, Dennis, embarrassed by his father's actions as a child turn into his chief council as a young man (Jake Abel, "Strange Wilderness")? Why isn't Gil Privick too embarrassed to attend his former friend's day in court? Abraham has done a good job at setting up his characters, but then he fails to develop them, putting his story on cruise control. "Flash of Genius" isn't a bad film, it's simply a mediocre one with occasional brief flashes of something a little better.

This old-fashioned made-for-TV style flick pits the little guy against the auto-making monolith. Things look bright and promising when Kearns dreams up his idea and sets out to make it real. His wife, Phyllis (Lauren Graham), and their six youngsters support Bob as he lays out plans to not just create but manufacture his invention. He recruits his friend Gil Previc (Dermot Mulroney) of Previc Automotive and the partners approach Ford with their now patented device. Ford is very interested but requires a working model to inspect. Months later, they tell Kearns and Previc they are no longer interested in the invention. Not long after this disappointment, Bob is out driving during a rain storm and sees, to his shock, two brand spanking Ford Mustangs ­ with inttermittent windshield wipers. Incensed, Kearns begins a journey that with will cost him his wife, his career, his children and 14 years of his life. Is being proved right worth this cost for the man and the family? "Flash of Genius" answers this: yes and no. From the very start you know where this film is going. The David vs. Goliath line is drawn early on and things move to the expected conclusion. As I watched "Flash of Genius" my only thought to the outcome was how much money the court would award him in the end. Still, the straightforward storytelling is well acted, directed and shot. If it were a made-for-TV flick it would have enough oomph to garner awards attention. As a theatrical feature, it is best left to rental ­ especially now that moviee tickets have topped the $12 mark.