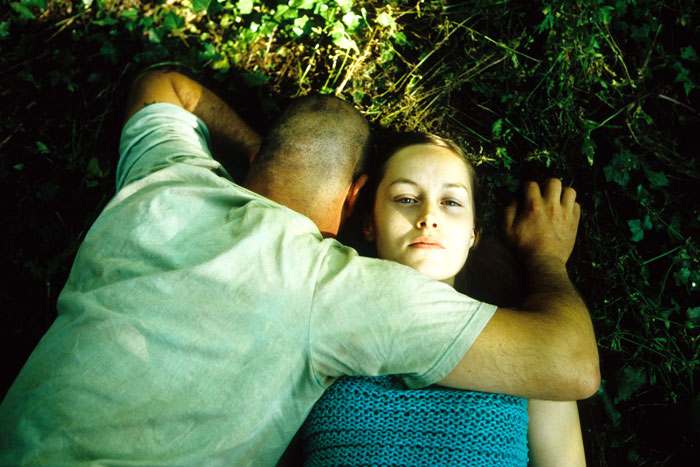 Young farmer Demester (Samuel Boidin) loves the girl, Barbe (Adélaïde Leroux), he has lived next to all his life but loses her to Blondel (Henri Cretel) when he will not tell her so. But when all the young men of the surrounding area go off to war, things will never be the same back in "Flanders."

Controversial filmmaker Bruno Dumont ("L'Humanité," "Twenty-Nine Palms") has made a career exploring the baser, bestial aspects of the human race, and "Flanders," the Cannes 2006 Grand Jury Prize winner, is no exception. The film certainly isn't enjoyable on any level to watch, yet it is thought-provoking even if one cannot come away from it feeling that it's author made his point well. The film opens on a shot of a farm's courtyard devoid of people but full of the sounds of livestock. The farmer, Demester, appears and begins walking against the bleak, mucky terrain. Barbe falls in and the two continue a silent walk punctuated by a quick rut in the bushes. They part with a noncommittal kiss and we learn that it is the day before Demester is off to an unspecified war and that he professes to be looking forward to going. That night in a gloomy, rustic local inn the farmers gather and it is assumed that Barbe is his 'girl,' but he says they are only friends. Clearly not the reply she expects, Barbe goes off with another man. The men depart for war in an environment the flip side of theirs - semi-tropical, often scorched and hot - and a land we begin to realize is occupied. Attack can come from anywhere, the young, the old. A female resistance soldier is gang raped by most, a simple man with a donkey is shot in the middle of nowhere (making it difficult not to equate the donkey's fate to "Au Hazard Balthazar"), and the unit is overwhelmed by hidden forces. As prisoners, they are confronted by that female soldier who metes out an odd form of justice. Meanwhile, back at home, Barbe learns she is pregnant and cannot resist hitting the haystack with a handsome stud and eventually is interred in a local mental hospital. Demester escapes the POW camp with a friend who he must abandon and is the only soldier to return. Barbe asks for an explanation and he admits to having left Blondel behind (although it was never clear to me whether Blondel was actually the man innocently accused of rape, castrated and killed). Barbe accepts Demester back into her arms. Dumont's film is peopled with blanked out, deadpan characters who only seem to be able to express emotion after going to hell and back, yet he fails to take us on his characters' inner journeys. Admittedly, the post-war Demester may more readily seek comfort in a woman's arms, but why could he not express love before? Barbe's breakdown is completely unexplained and, with the exception of the always recognizable Demester, it is frequently difficult to tell members of the unit apart, making their various fates confusing. "Flanders" is certainly more worthwhile for the thinking filmgoer than most Hollywood summer fodder, but while it is a difficult film to relate to, one cannot dismiss its director's visual acuity and ability to provoke the mind.