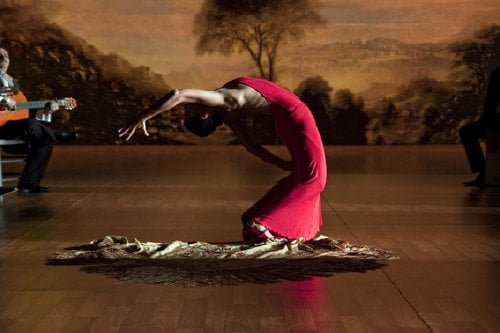 It's a bit of a mystery why this 2010 film is only now being released in theaters stateside, but although it sounds like watching a string of music videos best done at home, this stunning, absorbing work really demands the theatrical experience. It is not only a beautiful work of art, but an education - who knew Flamenco could encompass dueling pianists with only clapping hands as accompaniment? One notices similarities between Flamenco dance and tap, yet Flamenco encompasses the entire body, more like ballet. The film begins as Storaro's camera floats over grouped portraits and paintings before settling onto a stage for 'Rumba,' where singer Carlos García hands off to Mª Ángeles Fernández. The second number, 'Alegria,' incorporates the traditional dance most associate with Flamenco and Sara Baras, clad in flowing red, exhibits amazing control. The stage sets constantly change, wooden floors giving way to checkerboards or a high gloss used for its reflective purposes (one number begins and ends in faux horizontal 'split screen,' the floor delineating mirrored images). Glowing painted backdrops gradually shift from golden to the colors of night. Panels present movie posters and album covers or 'frame' the action. In one of the film's most complexly choreographed pieces, 'Silencio,' Israel Galván dances in front of, among and behind panels, using his silhouette almost as a dance partner (the piece's title is amusing as the dance is 'acapella.') In another, John Singer Sargent's magnificent El Jaleo is used as a backdrop for an inspired recreation of his scene. One panted female singer artfully uses a cigarette and its smoke as part of her performance. Estrella Morente entrances in 'Tangos.' One grouping seems to recreate a Victorian era garden party in one of the film's breezier acts. Rain drenches a pair of lovers. An energetic, handsome young male dancer performs to music that has hints of an Irish jig, then almost Cajun flavors. Towards the film's finale, an entire semi-circle of musicians, singers and dancers, young and old, trade off, giving the impression of a village square on a Sunday afternoon. "Flamenco, Flamenco" is a marvel of color, light, music and dance. Let it envelop you in the dark on the big screen. Grade: