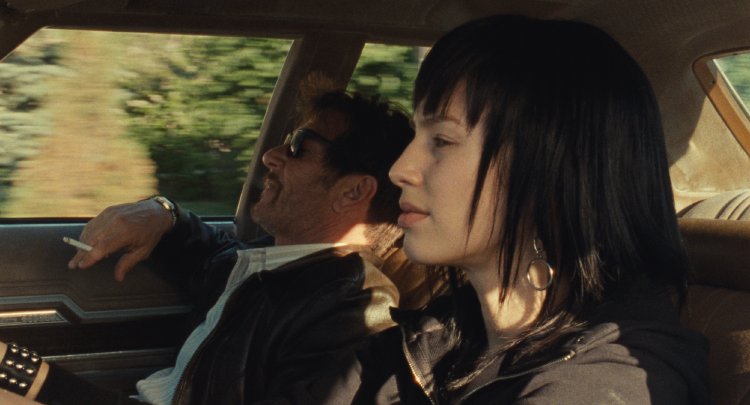 Jennifer Vogel (Dylan Penn) cherishes memories of her father from her childhood, golden days of swimming and sparklers.  Even after he leaves her mother (Katheryn Winnick, "The Dark Tower") with a pile of unpaid bills in addition to herself and younger brother Nick, Jennifer keeps her faith in him and when her mom, Patty, fails to protect her from the abusive new man in her life, the teenager hits the road to find the ex-con who always believed all of America celebrated his birthday on “Flag Day.”

Except for the little seen 2019 film “The Professor and the Madman,” it’s been 6 years since director Sean Penn ("Into the Wild") has appeared on a movie screen and I, for one, welcome him back.  Penn’s last outing behind the camera, 2016’s “The Last Face,” was reportedly a bomb, so although “Flag Day” doesn’t wholly succeed, it is clearly a step up, an impressionistic look at a father and daughter relationship featuring a real father and daughter which also works as an allegory for the myth of the American dream.

In adapting Jennifer Vogel's memoir, screenwriter Jez Butterworth ("Ford v Ferrari") uses an early scene of a tired dad encouraging his terrified preteen daughter to take the wheel as his through line that Jenn is her father’s daughter, the young girl (Jadyn Rylee) told that driving will give her freedom never without a car as an adult, no matter how broke.  Another touchstone is a drawing dad’s made of a roadside cowboy billboard based on Jennifer’s ability to describe it, used less successfully as the spark which apparently gives her the desire to become a journalist.  The third scene the filmmakers repeat throughout is a jubilant Flag Day celebration, dad dressed in the stars and stripes driving his family into a lake in an amphibious car.

While these scenes hit their marks to varying degrees, it is ironic that Jenn’s two individual scenes of condemning first her mother, then her father’s behavior grate because they are so alike, Dylan Penn’s screaming tantrums, while understandable for her character, less effective  for their lack of nuance.  The actress is more successful as Jenn finds her own way in the world, overcoming homelessness and drug abuse, then propping up dad’s seeming attempt to go straight.   But dad’s proclivity for the con, portrayed by Penn as a combination of addiction and low self esteem, cannot be denied no matter Jenn’s faith in him, at least until his last stab at currying favor, a ruse so blatant his adult daughter becomes exasperated.  Watch Penn’s face when Vogel knows he’s been caught, the admission flashing for a mere instant before the con’s turned back on, albeit more feebly.

Penn, aided by Danny Moder’s nostalgia cloaked cinematography, approaches “Flag Day” like a series of memories coalescing towards inevitable tragedy (his climax is reminiscent of Eastwood’s “A Perfect World”).  If that tactic often makes the film feel not fully formed, we can see it too in the casting of stars and character actors like Josh Brolin, Regina King, Eddie Marsan and Dale Dickey in one to two scenes, often of little import.  Joseph Vitarelli’s guitar score adds to Penn’s nostalgic feel, although the filmmaker relies more heavily on Chopin and Bob Seeger’s “Night Moves” for scene setting.

John Vogel (Sean Penn) perpetrated the fourth largest counterfeiting crime in American history, producing some $20-million in fake currency, until his arrest in 1995. His daughter, Jennifer (Dylan Penn), tells the story of her father’s life, his crimes and his passions and how it affected her life in “Flag Day."

If you cannot tell from the above synopsis, “Flag Day” is based on the memoir by Jennifer Vogel and, though it is about her dad-by-day-criminal-by-night father, it is really a study the tough road she faced – because of John.

Growing up, Jennifer had to deal with her father away for “work” most of the time, leaving her, her mom and younger brother Nick, to fend for themselves. Mom does not handle the situation well and turns more and more to the bottle, leaving the kids to deal with the disaster.

Unknown to his family, at least the kids, John is a bank robber, arsonist and prolific counterfeiter and, possibly, a murderer. But, to young Jennifer, he was a fun-loving dad who made everything an adventure. Her story goes beyond her “idyllic” childhood and is about growing up and coping with John’s abandonment, an alcoholic mother, and no money. “Flag Day” follows Jennifer’s turbulent life from teen to adult as she finds herself.

Dylan Penn, as Jennifer, is given a big role to fill as the main character in “Flag Day” and does a competent job in portraying the daughter of a criminal. The young Jennifer accepts her dad’s frequent business trips – which are a combination of criminal activities, like arson for hire – and loves the attention he gives her when he is at home. But, the fragmentation and chaos, never mind the lack of money, he causes in his little family has its terrible costs.

We follow Jennifer, first as a child (Addison Tymec), then as a terrible teen and runaway (Jadyn Rylee) and, finally, as an adult (Dylan Penn). It is at this later, still vulnerable, age that Jennifer learns the truth about her dad and his crimes. It is a rocky road for a girl as she journeys between adoration for her fun-loving dad and the heartbreak that he causes her and her mom, Patty (Katheryn Winnick in a small but fleshed out performance) and her brother Nick (played as the older Nick by Hopper Penn).

Sean Penn directs his kids and cast with skill and, while almost a cameo character, gives John depth. You never figure out what makes the man tick. He “loves” his family but will drop them in the wink of an eye if a good “deal” comes up. It is a good parallel study to the main one about Jennifer, which is a good character study unto itself.