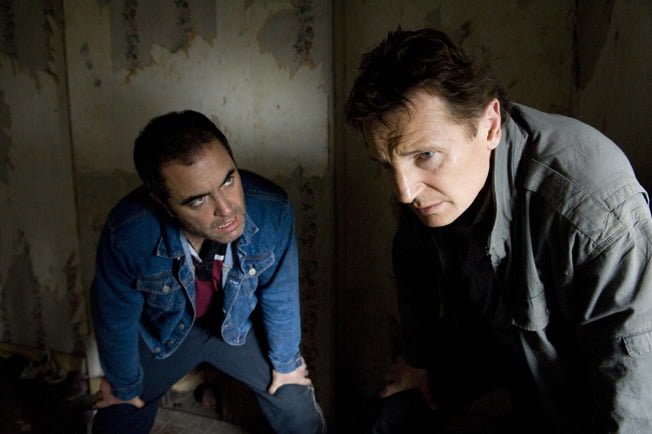 33 years ago, 17-year-old Alistair Little (Mark David) was a committed member of the militant protestant Ulster Volunteer Force (UVF) when he agreed to perform his first assassination. He does the job, putting three bullets into the victim, but there is a snag. The target’s young brother Joe witnessed the shooting and has been blamed by his mother these many years for not stopping his brother’s death. Now, so many years later, a reality TV program wants to bring Alistair (Liam Neeson) and Joe (James Nesbitt) face to face in “Five Minutes of Heaven.”

Reportedly based on the true story that was the inspiration for “The Fault In Our Stars,” writers Mikki Daughtry and Tobias Iaconis, whose script has since been novelized, have dialed that film’s drama up to an ear splitting level, their climax completely untethering from reality. This is a teen ten hanky weepie, which starts out well enough and remains watchable due to the talents of its cast. Haley Lu Richardson has been making smart and varied choices since 2016’s “The Edge of Seventeen,” but while she’s thoroughly engaging, her choice of material here is a step backwards from “Columbus” and “Support the Girls.” Cole Sprouse, known for his television roles, smartly underplays the ‘bad boy’ aspects of his character and should see his cinematic stock rise after this performance. Moises Arias continues to impress with his solid supporting turn as Stella’s best friend and fellow CF sufferer Poe. Making his feature debut, director Justin Baldoni establishes Stella as a normal teenage girl before pulling back the camera to reveal her hospital room setting. Stella’s in for a ‘tune-up,’ a stay long enough that she’s completely redecorated her room. She spends time receiving calls from friends for vicarious enjoyment of events she’s missing, documenting her treatment in an optimistic and informative video series and checking out the newborns in the neonatal intensive care unit. After a rocky introduction to Will, Stella looks out her window one night to observe him sitting on the ledge of the hospital roof. She rushes up, tells him off and promptly locks him out. Wondering why she cares so much, Will begins to prod, perhaps a little too deeply when it comes to her sister, Abby (Sophia Bernard). After noting that Abby appears in none of her videos for the past year, Will determines Stella’s pain and succeeds in getting her to open up. Poe notes that her fastidious management of Will’s medication cart is, to her, ‘like foreplay.’ A ‘date’ ensues, one which Stella guides with a five foot pool cue, each holding one end of the stick. Baldoni stages a lovely, erotic scene by the swimming pool, his actors’ eyes conveying the touch that cannot happen. Upon learning of Will’s eighteenth birthday, Stella arranges an elaborate surprise with Poe’s culinary assistance, but the joyous evening turns out to be an appetizer to tragedy. While we become invested in the three principals, as Baldoni’s film progresses, it becomes increasingly difficult to believe. The hospital itself is a fantasy-land where CF patients run free creating myriad adventures with unlimited supplies from balloons to live lobsters, expressing their moods with quirky fashion choices. A loss is predictable, a screenwriting cliche, and provokes a lashing out which becomes preposterously contrived and coincidental. The film’s ending is over-the-top, like one of those cinematic school plays which looks produced for Broadway, its effect surely highly controversial given its audience’s state. “Five Feet Apart” is sure to be popular with its targeted demographic and to its credit, it will certainly raise awareness of cystic fibrosis and the importance of human touch to our emotional well being. But while Baldoni’s direction of his actors is assured, Richardson and Sprouse crafting a moving relationship, his inability to rein in the screenplay’s more outlandish scenarios and on-the-nose symbolism renders “Five Feet Apart” more shamelessly manipulative teen romance than authentic drama. Grade:

This is an unexpected story of twists and turns of time and fate. It starts off like “Frost vs. Nixon” but diverges from the interview path to create a pair of sobering character studies. James Nessbit, as Joe Griffen, gets the meatier role as the long tormented brother of the assassin’s victim. His voiceover predominates the film’s first hour as he bares his true intention of revenge. Liam Neeson’s Alistair Little is mostly a solemn face during this time as we learn of Joe’s tortured life and Alistair’s apparently successful, idyllic one. As the tale unfolds, telling what transpired during and after the murder for Joe and Alistair 33 years ago, it shifts to the present. After the first hour, though, we get to the meat of what is really going on but I don’t want to give anything away about this sparsely told intriguing tale. The acting is excellent, not just Neeson and Nesbitt, but supporting cast, too. Anamaria Marinca, in particular, excels as a TV production go-fer assigned to baby-sit Joe before the interview. In a very short amount of screen time, the actress develops a kind and understanding character who feels for the troubled Joe. Other supporting players also help give the film dimension. Production is solid but it is the storytelling and acting that stand out.