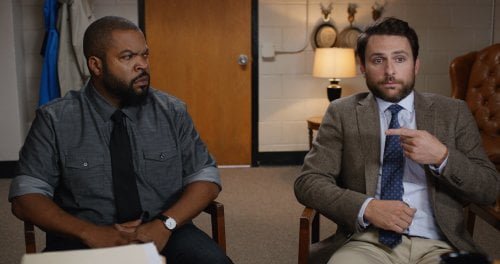 It's the last day of school at Roosevelt High and English teacher Andy Campbell (Charlie Day, "Horrible Bosses") is having a bad day. Not only is his wife three days past her due date, but he's being assaulted by senior pranks and has an appointment with Principal Tyler (Dean Norris, AMC's 'Breaking Bad') whose wrangling with budget cuts surely means staff firings. Things get far worse when Andy reveals that it was much-feared history teacher Ron Strickland (Ice Cube, "Ride Along") who destroyed school equipment with a fire ax. Stickland's fired and challenges Andy to an after school "Fist Fight."

Welcome to the worst movie of 2017. And 2016. And possibly several years before that. Based on an idea by producer Max Greenfield that is nothing more than 1987's "Three O'Clock High" with teachers instead of students, screenwriters Van Robichaux and Evan Susser embrace violence, stupidity, incompetence, animal abuse and drug abuse within a public educational administration all in the name of comedy. It says a lot about a film when its most bearable moment is watching a 9 year-old perform Big Sean's 'I Don't F**k With You' at a school talent show. Everyone involved with this should undergo movie detention for the foreseeable future. While Campbell tries to reach out to his apathetic students, Strickland, the epitome of the angry Black man stereotype, uses fear and intimidation. Campbell's attempt to help Strickland (who's conjectured to be everything from a former gang member, piano virtuoso and cop) backfires for no explicable reason, as logic and real human behavior have no place here. As news of Stickland's challenge begins to spread (via the school newspaper, twitter, video animations and eventually local news media), Campbell cooks up schemes to weasel out of it, like asking colleague Holly Grossman (Jillian Bell, "22 Jump Street") for some of her 'home ec meth' seniors fed to a horse that's running the halls, to plant on the history teacher (alas, she takes it all before coming to school, the better to lust after an under aged student). But some, like French teacher Ms. Monet ('Mad Men's' Christina Hendricks), are rooting for his beating and Campus security guard Mehar (Kumail Nanjiani, HBO's 'Silicon Valley') refuses to help because an after school event is outside his jurisdiction. Director Richie Keen (TV's 'It's Always Sunny in Philadelphia') struggles to build tension with Campbell's additional conflict of having to appear in his daughter Ally's (Alexa Nisenson, "Middle School: The Worst Years of My Life") school performance at the same time as his meeting with Tyler. It's depressing to watch Ice Cube sell out his past by using NWA's 'F**k Tha Police' as a throwaway punch line (it's apparently funny because we recognize it). It's more disheartening to see Dennis Haysbert show up as School Superintendent Johnson, another corrupt administrator ('30 Rock's' Tracy Morgan also costars as Coach Crawford, a character with no reason for being). And just when you think things couldn't get any worse, the fist fighters are hailed as educational folk heroes for drawing media attention. Lest you be worried that Campbell and Strickland will never repair their rift, fear not, because all is forgotten when Maggie Campbell (JoAnna Garcia Swisher, TV's 'Pitch') goes into labor. If only one of those seniors had pulled the fire alarm in the film's first five minutes. Grade: