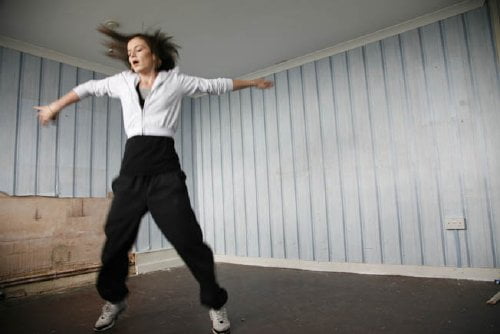 Mia (Katie Jarvis) is a troubled young teen living in Essex, England with her blue-collar single mother, Joanne (Kierston Wareing) and younger sister, Tyler (Rebecca Griffiths). Her home life consists of mom boozing it up every day and a steady string of her one-night stands strolling through the flat. Things change when a new boyfriend, Connor (Michael Fassbender), arrives one the scene. Newfound feelings surface in the young teen as Mia comes of age in “Fish Tank.”

Mia (Katie Jarvis) is an angry fifteen year-old leaving with her single mom Joanne (Kierston Wareing, "It's a Free World...") and younger sister Tyler (Rebecca Griffiths) in an ugly modern Essex apartment complex. Clearly misunderstood and un encouraged, Mia's only outlet is hip hop dancing, until, that is, her mother's new boyfriend Connor (Michael Fassbender, "Hunger," "Inglourious Basterds") arrives on the scene. But Mia's impulses prove all wrong and she discovers too late that she's been living in a "Fish Tank." Writer/director Andrea Arnold ("Red Road") returns with another British drama played out in an institutional living space featuring suspect sexual urges, child endangerment and voyeurism but where "Red Road" was focused on an adult and shot mostly during nighttime, "Fish Tank" is a coming of age tale that swaps in bright colors. Newcomer Katie Jarvis makes quite a splash in a riveting performance as Mia. The film begins with Mia trying to reconnect with a friend she knows she has alienated. Keeley (Sarah Bayes) won't answer phone calls and when Mia goes to her building she finds her friend dancing in a hip hop lineup. Mia insults their dancing and head butts one of the girls before returning home and letting loose in the vacant apartment above her own home. At home, the 'B' and 'C' words fly among the dysfunctional female family (mother is a slutty alcoholic party girl and even elementary school aged Tyler drinks and smokes). It seems that Mia only really connects with animals, like the family dog or the old, white horse she sees chained by some travelers' caravans and tries to free. Dancing in skimpy skivvies one morning while preparing coffee, Mia meets Connor as he watches her from the doorway equally underdressed. Mia puts on her antagonistic defense act, but is clearly intrigued. Mom banishes the girls from the adult party going on later in the day, but when Mia gets drunk on a purloined bottle of vodka, she watches carefully between slit eyes as Connor gently carries her to bed, takes off her boots and slips off her pants and tucks her in. This may be the most affection Mia has received in her lifetime, but Connor's chivalrous attentions have a creepy, predatory undertone. Arnold dials up the sound of breathing and director of photography Robbie Ryan ("Red Road," "Brick Lane") frames everything with a sensuality that sucks one in, even as one intellectually recoiling. When Connor invites the girls to join him and their mum for a drive, it becomes more a date with Mia than the suspicious but sozzled Joanne. Connor proposes catching a fish with his bare hands and only Mia will wade in to help him. The scene is one of breathtaking suspense and when Mia cuts herself on the way back to shore, Connor piggybacks her to the car. The cut calls for attention yet again and Connor's hovering over the slit flesh is an eerie foreshadowing. The sacrificial fish ends up with the family dog. Meanwhile, Mia returns to the white horse and meets Billy (Harry Treadaway, "City of Ember," "Control"), the older brother of one of the two who physically harassed her and stole her backpack. A tentative friendship begins ('It's not what you think,' he says of the horse, 'she's old.'), but Mia continues to go out of her way to see Connor, even arriving at his place of work to get his take on an ad looking for dancers (he encourages her as we wonder why). Mia tapes herself dancing with a camera lent by Connor. Later Arnold films her in that vacant apartment, it's wall of windows made to evoke that titular fish tank with watery burbles on the soundtrack, Arnold's one lapse into literal heavy handedness, forgiven for how all the other sounds - music choices in particular - lend so much to the film's sweet and sour tone. Arnold doesn't present a very optimistic view of the world, but it is not one without hope. Mia soon enough learns that Connor has been slumming with her and her mom and gets off pretty easily for the thwarted revenge she takes. The animals Mia loves are not unlike her, dependent because of their societal situation, but Mia takes a step to break the pattern. As Connor, Michael Fassbender walks a fine line - seductive, seemingly caring, perhaps even ultimately understanding. He's a charming creep, an opportunistic cad who berates himself only when it is too late. Jarvis is a real find, a defiant source of energy, a yearning child in the blossoming body of a woman.

17-year old Katie Jarvis is a newcomer to film and the young actress gives a stunning debut as the defiant, sullen Mia. Director/scripter Andrea Arnold centers the novice actor in this finely honed coming of age story and Jarvis holds her own opposite veterans Fassbender and Wareing. Mia is taken by handsome, sexy Connor who shows her kindness and friendship. The sexual tension is palpable when he carries her, supposedly sleeping, to bed or when he spanks her for being flippant but Connor avoids crossing the line until…. “Fish Tank” goes in unexpected directions as Mia explores her budding sexuality only to be betrayed by Connor’s deception about his true self. As the plot twists away from convention, the film takes us to unexpected and frightening places. In the end, though, Mia comes of age and her life gets on a positive track. A terrific debut performance by Katie Jarvis, solid support from her veteran co-stars, good production and direction and a well-crafted story make this a worthwhile, mature and engrossing film. For those with sensitive ears, please beware. The language is salty throughout with the “F” word used frequently, even by Mia’s little sister Tyler.