First They Killed My Father: A Daughter of Cambodia Remembers 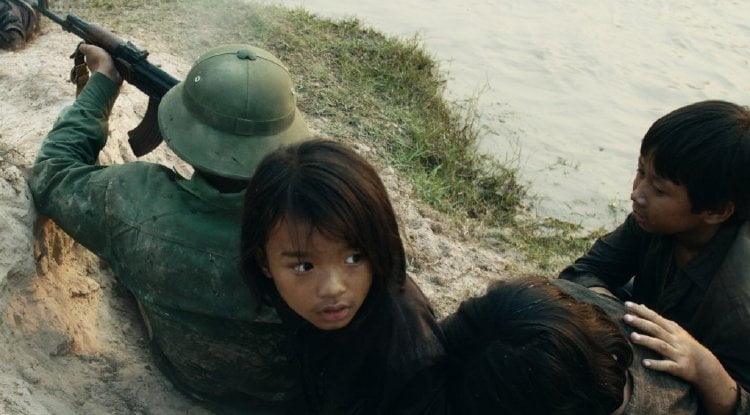 Loung (Sareum Srey Moch) was just six years old, happy and carefree when the Khmer Rouge army rolled into the Cambodian capital of Phnom Penh, forcing the city’s inhabitants into the country to “work for the people of Kampuchea.” This begins a years' long journey with her steadily dwindling family to survive the carnage of the Communist revolution in “First They Killed My Father: A Daughter of Cambodia Remembers.”

Jolie, whose first adopted child, Maddox, is a Cambodian, has long been affected by the Khmer Rouge's killing fields. For her fourth film, cowritten with the titular memoir author Loung Ung, she hired Maddox, along with a Cambodian cast including newcomer Sareum Srey Moch, who plays Loung, found in a charity school. Most of her crew were also hired locally and the film was shot entirely on location in Cambodia. Beginning with a brief but searing history lesson on the U.S. intervention that led to the events she depicts (set, appropriately, to the Rolling Stones' 'Sympathy for the Devil'), Jolie ("Unbroken," "By the Sea") plunks us into a modern, Westernized household circa 1975 Phnom Penh where Loung enjoys a happy childhood with her siblings, her mild mannered government official father (Phoeung Kompheak) and stylish mom (Sveng Socheata). She stands amidst the throng of people cheering the arrival of the Khmer Rouge troops, her dad's calls from their apartment balcony going unheeded. It is interesting that the film, which is getting a limited theatrical release, is debuting on Netflix as it is like a female counterpart, from both a filmmaking aesthetic and protagonist POV, to the streaming platform's 2015 release "Beasts of No Nation." As the capital's civilians are evacuated from the city, the Ung patriarch schools his children on hiding their identities, his former job an executable offense under the new regime. As they enter an agriculture camp (prisoners are forced into hard labor and fed starvation rations as they watch the fruits of their labor loaded into carts), the girls see their red New Year's dresses taken from their meager possessions and tossed into baskets (the scene recalls the little girl in the red coat in Steven Spielberg's "Schindler's List"). Jolie, returning to the genocidal themes of her first film "In the Land of Blood and Honey," has made a somewhat softer film as she depicts everything from the five year-old's point of view (Loung will be nine by film's end). Most of the worst horrors take place off screen, like the death of Loung's beloved kindly dad, his face disappearing in a lens flare, but that doesn't stop her from visualizing them in her nightmares (in one, Jolie achieves a startling chill by simply turning her image upside down). Loung's mother eventually demands her three remaining children escape from the camp, each to head in a different direction. Loung eventually ends up in a Khmer military training camp, fought to attack the Vietnamese who will eventually give her safe harbor. In one horrific scene, Loung witnesses escaping Cambodians being blown to bits by the landmines she helped to place. Young Sareum Srey Moch has an expressive face and it is difficult watching the innocent young girl experience this hell, but it is the experienced actors, Kompheak and Socheata, whose valiant attempts to shield their characters' children from a world gone mad who do more heavy lifting. Cinematographer Anthony Dod Mantle ("Slumdog Millionaire") uses lots of overhead shots establishing patterns of people within a landscape like a military map for troop movement. Marco Beltrami's ("Logan") score is a tonally fluid soundscape. The film is a little long and by only keeping Loung's perspective, it tests credibility that she finds her sister and brother while entering Vietnam, but "First I Killed My Father" is one of Jolie's strongest works, a passion project bearing sweet and sour fruit. Grade:

Films about Cambodia, even about the Khmer Rouge slaughter of millions, are not usually high on the must-see list for many, even the avid movie buffs. Most of us think of “The Killing Fields (1984)” and not much else when thinking about Cambodia. (Just to let you know, there are many films about that genocide, like “The Missing Picture (2013)” and “S21: The Khmer Rouge Killing Machine,” both powerful documents, that deserve notice, too.) Uber-star and director Angelina Jolie follows her own path when it comes to the films she directs, like “The Land of Blood and Honey (2011)” and “Unbroken (2014)” – both with human suffering as a backdrop. With “First They Killed My Father,” the filmmaker teams with Loung Ung, the author of the source material by the same name, to bring us the story of the Khmer genocide through a little girl’s eyes. You have to keep that in mind – this is a view of war and horror from a six-year old girl’s viewpoint. Because of this POV, the perspectives that we see from adult height change to that of a little kid. This takes a bit of getting used to as events unfold: Loung is playing outside her home when trucks rumble through carrying government troops who promise all will be well. Then, a more powerful rumble shakes the ground as truckloads of Communist Khmer Rouge soldiers arrive to “liberate” the city from the corrupt Lon Nol government, declaring that the people are now free. The Khmer meaning of “free” is not what it means to you and me, but what does it mean to a little girl? The story, based on Loung Ung’s memoir, is a little epic that spans years, most of it with Loung, her family and the victims of the Khmer Rouge suffering from starvation, slave labor and other horrific deprivations. The film depicts the turbulent and deadly times as Loung’s father (Phoeung Kompheak), a ranking government official, and mother (Sveng Socheata) desperately try to save the lives of their five children from the Khmer revolution. The tensions, and the threats to the family’s survival, steadily ramp up and do not let up, making for a harrowing family chronicle. Angelina Jolie is obviously passionate about Loung’s story and the awful plight of the Cambodian people (due, in major part, because of US foreign policy). The production is of an impressive scale, shot in Cambodia with a mostly Cambodian cast and crew, with attention to details and facts, at least as the memories of a young girl. The film captures the fear and confusion as the refugees are force marched from camp to camp under constant haranguing from KR soldiers, reeducation to Kampuchean ways, stripped of personal possessions and forced to labor for long hours with little food. Again, this is all seen through the eyes of a little girl. My one criticism of ““First They Killed My Father: A Daughter of Cambodia Remembers” is that, while I felt great sympathy for Loung, her family and genocide victims, I, somehow, do not feel empathy. Rather than feel involved, I felt like an outsider looking in on the story. The violence is there, of course, but it is done as images that Loung sees or imagines – like her father’s death. Jolie almost makes the horror of war a graceful ballet of death and destruction.