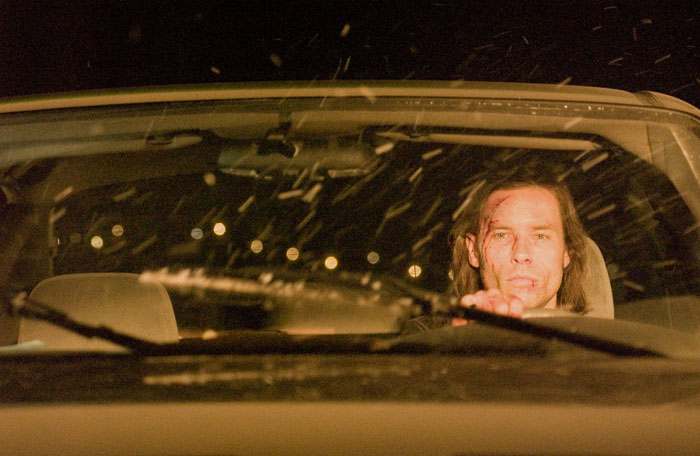 When salesman Jimmy Starks (Guy Pearce, "The Proposition," "Factory Girl") breaks down outside a remote New Mexico town, he decides to while away the time waiting for his car to be repaired by getting a reading from a roadside seer (J.K. Simmons, "Harsh Times," "The Astronaut Farmer") Jimmy's cynical when the guy tells him what he wants to hear but a bit shaken when the man looks further, clams up and gives him all his money back. Later, after his injury-plagued Wolves win and his get rich quick scheme is backed by the very name he was given, Jimmy returns and learns that his road is coming to a close after the season's "First Snow."

The feature directorial debut by "Children of Men" scribe Mark Fergus works far better as a character study than it does as a thriller. Story wise (written by Fergus and his "Men" coscripter Hawk Ostby), "First Snow" is a morality tale that's underlying history is too vaguely defined to support the intensity of the present's drama, but Guy Pearce's searing, emotionally naked performance provides the film its power. Starks, who looks like Pearce's fellow Aussie, goth rocker Nick Cave, in a J.C. Penney suit and a desert tan, is good at looking out for number one. When it means getting an in with the boss, who he hopes will partner on a scheme selling reconditioned Wurlitzer jukeboxes, Jimmy even sells out his protege (Rick Gonzalez, "Coach Carter," "Roll Bounce"), and he prefers his sterile, cramped cookie cutter home to the multi acre sprawl girlfriend Deirdre (Piper Perabo, "The Prestige," "Because I Said So") dreams of. After his fortune's told, two events derail Jimmy's ambitions. First, he learns he's got a weak valve, a hitherto unknown heart condition, and is shocked to consider his own mortality. Then a business colleague tells him that his former best friend Vincent (Shea Whigham, "All the Real Girls") is home from jail and it seems like Vincent thinks there is a score to settle. Pearce is simply terrific in a three part character that draws from the five stages of grief. The cocky grinning Jimmy we first meet grows inward, trying to deny, outwit, then run from his own guilt. Finally peace and acceptance grow out of facing his own failures. Also strong are William Fichtner ("Blades of Glory") as Jimmy's new best, straight-talking buddy, Simmons in an uncharacteristically quite performance and Jackie Burroughs ("Fever Pitch") as Vincent's dying mom. Shea Whigham gives Vincent an unsettling, hair trigger aura but he lacks in intensity, his late arriving character underwhelming after all the portent his name and telephone voice have conjured. "First Snow" ends with a nicely played ambiguity, but it fails to give weight to the events which compromised its main character. Guy Pearce is two for two in 2007 playing American users whose actions come back to haunt them.