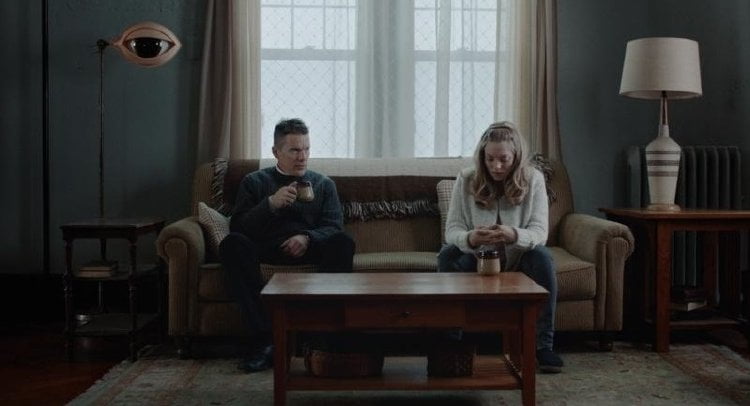 Father Irving Toller (Ethan Hawke) is a former military chaplain who encouraged his son to join up and serve his country. Joseph does and gives his life fighting in Iraq. Toller’s grieving wife left him and he is embroiled in a crisis of conscience, blaming himself for his son’s death. Toller is assigned a small parish in upstate New York and struggles in his battle between despair and hope at “First Reformed.”

In upstate New York, a small, historic Church has largely become a tourist attraction, its small flock tended to by Reverend Ernst Toller (Ethan Hawke). Reverend Joel Jeffers (Cedric Kyles aka Cedric the Entertainer), head of its modern parent Church, Abundant Life, is trying to arrange a meeting with businessman Edward Balq (Michael Gaston), who is underwriting Toller's church's 250th anniversary celebration, just as Toller has become aware of Balq's hand in environmental pollution through his counseling of a troubled parishioner of "First Reformed." Writer/director Paul Schrader's screenplays for Martin Scorcese's "Taxi Driver" and his own "Hardcore" indicated an affinity for vigilante crusaders. Now, incorporating his own upbringing in the Calvinist Christian Reformed Church and his appreciation of the transcendental work of Ozu, Bresson and Dreyer ('Transcendental Style in Film: Ozu, Bresson, Dreyer'), Schrader has made his best film in years with his eco-warrior country priest. Highlighting his inspiration in Bresson's "Diary of a Country Priest," Toller is introduced writing in a journal Hawke's voice over tells us he will keep for one year. The man is reticent, clearly haunted by something in his own past, so it is no surprise that when he is asked by a parishioner, Mary (Amanda Seyfried), to speak to her husband, Michael (Philip Ettinger) awkwardly waiting outside the sacristy, Toller initially tries to pass her off on Abundant Life, noting that the larger Church has counseling resources. Mary tells him Michael is reluctant to speak with anyone, but agreed to speak with him. Visiting Mary and Michael's simple home, Toller is taken with Michael's passion, the man an amateur environmentalist convinced the planet will be uninhabitable by 2050. Michael does not want to bring a child into this world, yet Mary is expecting, the source of the couple's strain. Toller advises that 'holding two contradictory truths at the same time is wisdom,' that hope and despair are life itself. He also confides the source of his own mental torture as the descendent of a long line of military men who sent his son off to the Iraq War against his wife's objections only to see him return in a flag draped coffin. Michael seems receptive to Toller's words and agrees to meet again. Later Mary calls him in a panic. Toller agrees to dispose of what she's found in her garage, a homemade suicide vest. When Michael's body is discovered, dead of a self-inflicted gunshot, Toller enrages Balq by respecting the man's wishes to have his ashes scattered at a local Superfund site, the ceremony covered by media. Like Bresson's priest, Schrader's is also confronting a deadly illness which he mentions to no one. He writes with a bottle of Kentucky whiskey and Pepto Bismol, increasingly relying on both. But this being Schrader, not Bresson, his Toller makes a radical decision to act. The pull between Toller's monastic church and Jeffers's flashier modern one is inversely reflected in two women, Abundant Life's plain choir instructor Esther (Victoria Hill) hoping a prior sexual encounter becomes commitment (Toller rejects her harshly, finding her concern smothering) while there is an undeniable spark with Michael's beautiful, expectant, also Biblically named widow. Schrader's spare aesthetic is stunning, his figures featured in two shots against plain walls and uncarpeted floors devoid of color. Toller's room is guarded by a triangular shape, his son's burial flag, hovering in the upper left corner of the frame. Schrader's transcendental scene astounds in a different way from a very similar one from "The Exorcist." There is little in the way of scoring, music only occurring organically within scenes. Ethan Hawke, who's been delivering some of the best work of his career of late ("Born to be Blue," "Maudie"), embodies this conscious-stricken pastor with prickly restraint, a thoughtful man not in the habit of sharing them despite his role. Seyfried holds her own with him, the spiritual receptacle of one of Schrader's conflicting themes. "First Reformed's" subtext may be one of despair, but its final shot embraces hope. Grade:

We meet Father Toller as he counsels his very troubled parishioner, Mike, an environmental activist and husband to his pregnant wife, Mary (Amanda Seyfried). Mike has doubts about bringing a child into a world that that will cease to exist in his baby’s lifetime. Irving tells him to have faith in God. Then, he gets a call from Mary to meet at her home. What she shows him is deeply disturbing: a suicide bomb vest. Irving takes the vest with him and does not tell the police. Toller takes the vest, hoping he has diffused the problem. Then, he gets a text from Mike to meet him at a remote hiker’s trail. The priest finds his parishioner dead – a suicide victim. Later, Mary asks Toller for help going through Mike’s papers. What he finds is proof of environment conspiracy that involves the wealthy benefactor to his parent church, the Abundant Life headed by Reverend Jeffers (Cedric the Entertainer, AKA Cedric Kyles). Toller’s personal crisis pales when he realizes the scope of the conspiracy. The pieces of this story – Irving’s crisis, Mary’s tragedy, Mike’s troubles, the vest and high level corporate corruption – can be assembled in different ways. Writer-director Paul Schrader takes the pieces and produces a moving character study of one man’s struggle with himself, his faith and the fate of the world. As the film progressed, I began thinking about how the story would go. Schrader does not give anything away as he tells Toller’s tale. “First Reformed” is Ethan Hawke’s film and the actor gives a richly textured performance of a man at an important crossroad in his life. Amanda Seyfried is a sympathetic foil to Irving’s troubled man and is the hope in his “despair and hope” and is the positive side in his mostly darkly hued life. It is an actors’ film that has a strong message about both the environment, something that impacts us all, and one man’s faith. I also suggest you seek out Robert Bresson’s 1951 classic, “Diary of a Country Priest” for a similar look at one man’s crisis of faith in himself and God.