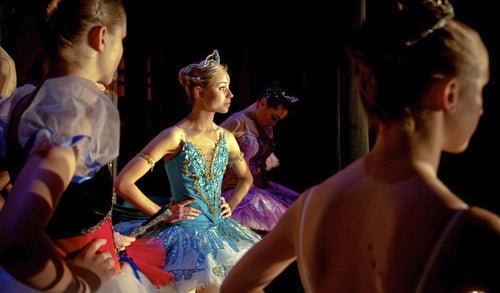 Each year the Youth America Grand Prix, the world’s largest international student dance competition, awards a quarter of a million dollars in scholarships to kids 8 to 19 from around the world. Documentary filmmaker Bess Kargman follows six of these aspiring contestants to see if they can dance their way to the “First Position.”

When Bess Kargman was trying to find a subject for her first film, she spied a line of ballet dancers on a Manhattan street trying to get into the finals of the Youth America Grand Prix competition. Kargman snuck in and when she saw 12 year old Miko Fogarty dance, she found her film. Kargman follows the pre-established pattern of documentaries following competitions from crosswords to spelling bees, but the format works and she's found six kids ranging in age from 9 to 16 who are truly involving. Miko, herself, is the daughter of a British entrepreneur and Asian mom who displays 'Tiger' tendencies. The family is focused on ballet, not only for Miko but her younger brother Jay-Jay. Dad's entire office is moved to bring them closer to trainer Viktor Kabaniaev. Miko is almost preternaturally mature and a dancer you cannot take your eyes off of. Kabaniaev obviously doesn't think much of Jay-Jay's talents and it's pretty clear to the audience the kid is mostly goofing around, but mom is determined. We're introduced to 11 year-old Aran Bell holding a BB gun in his bedroom next to a shelf housing a baseball mitt. Kargman is less than subtle here, but her subject is an intriguing one, demonstrating foot stretchers and other ballet apparatus. Aran's trainer says that with Aran, he has one of the one-in-a-millions. The Navy brat has recently moved to Italy, where his family jumps through hoops to get him the right training. Aran meets a girlfriend, Israeli Gaya, who goes into the dance because of him and turns out to be one of the most mesmerizing dancers of the lot. We never do really learn, though, what drew Aran into the ballet. Like figure skating, pursuit of ballet for a child almost requires affluence. We learn that tutus run up to $2,000 and that an $80 pair of shoes can be trashed after one practice session. Elaine, the devoted Jewish mother of adopted Sierra Leone orphan Michaela, spends hours dying the 'flesh toned' inserts of her daughter's costumes a deep brown to match her skin color and assures her daughter, who suffers from vitiligo (the pigment ailment Michael Jackson claimed to have), that her spotting cannot be seen when she is on stage. Michaela must also overcome the prejudices against Blacks in the ballet world and is determined to be the most graceful dancer the judges have seen. She's amazing to watch. Rebecca is the 'pink princess,' a high school student from a wealthy suburb whose friends call her Barbie because, she says, she is so weirdly flexible. We might see other reasons, but there is no denying Rebecca's dedication to the dance. She hopes to get one of the rare job openings with a company from exposure during the competition. 16 year old Columbian Joan Sebastian Zamora moved to New York City by himself, talks to his mother as much as money will allow and maintains a homey diet of rice and beans courtesy of his roommate. He's got the moves of a budding Mikhail Baryshnikov with great power and lines in his leaps. The final competition itself, the doc's climax, is a bit confused in presentation. We're offered a lovely montage of exquisite dancers identified only by their county of origin, but see little of the failures (Rebecca has a horrible first round). Kargman gives us glimpses of the judges observing the stage, but only a few snippets of what two or three of them look for. What we needed was an explanation of the results. There are multiple age divisions which are awarded first, second and third prizes for both genders. But there is one instance shown of a 'best overall.' There are scholarships and jobs awarded to dancers who didn't place. How does this all work? Still, "First Position" readily shows the hard work, heartache, pain and passion which must be poured into the art of ballet and Kargman has done so well choosing her subjects, at least one of their names is sure to become a staple in the world of dance.

Freshman director Kargman follows standard documentary procedure as she follows her chosen contestants through the trials leading to the big event of the Young America Grand Prix finals in New York City. The six that she selected range from age 9 to 19 and are all incredibly talented young dancers. The highlights of the film are, of course, the performances by the kids vying for jobs and scholarships that the competition could bestow as over 5000 contestants try out at the semifinals held around the world. The cookie cutter format Kargman uses in presenting her subjects may be unoriginal but a safe way to introduce the filmmaker to her new audience. The stories behind each one of the kids is interesting as we learn a great deal about children who give up their childhood for their art. Their dedication to dance and a will to risk injury to get to the next level of their chosen career is palpable for each, no matter what their age.