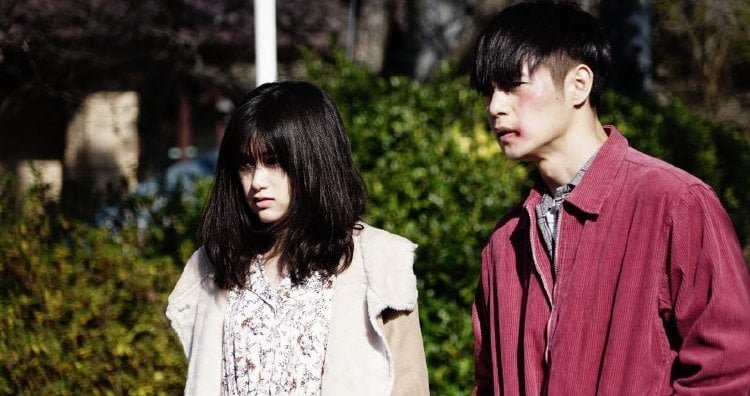 The decapitated head of a Filipino signals ‘war is in the air’ among Tokyo’s drug lords. Crooked cop Otomo (Nao Omori, “Ichi the Killer”) plots with Gondo’s (Seiyô Uchino, “13 Assassins”) Yakuza member Kase (Shôta Sometani) to steal a shipment of Gondo’s drugs and pin it on a young woman forced into prostitution to repay a debt, both being held by Yasu (Takahiro Miura). Meanwhile promising young boxer Leo (Masataka Kubota, “13 Assassins”) gets devastating news after inexplicably blacking out in the ring. With nothing to lose, he inadvertently gets mixed up in the mess when he punches Otomo on the street to help that young woman, Yuri (newcomer Sakurako Konishi), in “First Love.”

After a foray into period Samurai films, prolific Japanese director Takashi Miike (“Audition,” “Blade of the Immortal”) switches gears with a very violent, often funny, Yakuza noir with a blossoming romance as its through line. Working with a screenplay by Masa Nakamura (“Sukiyaki Western Django”), Miike’s film is disorienting for its first ten or so minutes, edited with no establishment of his onslaught of characters, some of whom are hallucinations, but once we’re sorted out, the film takes off.

Leo is noticed in the restaurant where he works by Chiachi (Mami Fujioka), who will later assist Otomo on the street claiming to be a nurse who is ‘a little drunk’ and decries men’s lack of empathy but who will turn out to be one of two very fierce women on either side of the drug war, a soldier of One-armed Fu’s (Chun-hao Tuan), another victim of a Samurai sword. It is not until Leo lands that punch that will realize that the schoolboy Ryuichi Yuri called to for help at Yasu’s was not real as she runs from Otomo because of a charging middle-aged man in his underwear who is not there (her father). Meanwhile Kase proves the most inept schemer of the bunch, the Rube Goldberg setup he arranges to obliterate his screw-up at Yasu’s symbolic of his plan crashing down upon everyone’s heads.

“First Love” is one of the films where you watch everything unravel in unexpected ways until the survivors all meet for one big showdown. Kudos to Miike for his female warriors, Yasu’s girlfriend Julie (Becky) formidably out of her mind, Chiachi finding her empathic male in the midst of insane bloodshed. Gondo gets a fabulously cinematic sendoff after exhibiting something resembling decency. Leo seems more protective of Yuri (known in the trade as Monica) than smitten, but the film’s title comes to bear in a sentimental coda that finds the couple crossing paths with the real Ryuichi at a literal crossroads.