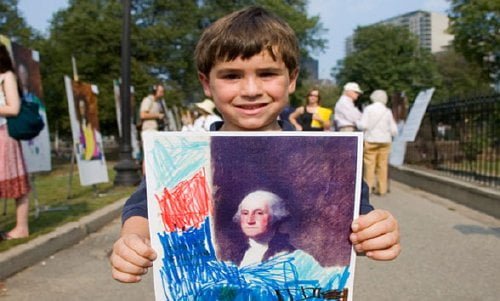 Gilbert Stuart was an American painter who learned from a slave on the wharves of Newport, Rhode Island and went on to garner fame in London. But he was also an alcoholic spendthrift addicted to snuff who landed in an Irish debtor's prison. In order to stave his mounting debts, Stuart decided to head back to America and paint George Washington. His iconic, unfinished portrait would become the defining image of the nation's president and we learn how it went down in "First Face: The Buck Starts Here."

Directors Jim Wolpaw and Steve Gentile take an entertaining approach for their ITVS documentary which contrasts the personalities of the artist and his subject but fails to inform us exactly how Stuart's work ended up on the $1 bill. They begin in 1796 with Washington's sitting in Stuart's Germantown studio, now the site of a Family Dollar. We get histories of both men with some unusual anecdotes thrown in for good measure. Stuart's artistic career is chronicled, with his predilection for practical jokes uncovered in the portrait of a young woman with the artist's profile clear in the flag which serves as background (the filmmakers animate the flag with dialogue, an amusing touch). After running through Washington's military history and the reasons for his current rather cranky attitude (not least of which is his distaste for his portrait painter), we hear again about the myth of his wooden dentures and learn that the teeth that were screwed into his jaw came from slaves. The second half of the thirty minute piece is given over to imagining how the unfinished portrait (the original, which Stuart kept in his studio to create $100 copies of, now hangs in Boston's Museum of Fine Arts's new Wing of the Americas) might be completed using groups of schoolchildren, artists and seniors. An outdoor exhibit of their work is held in Boston Common near Washington's statue to a wide spectrum of reactions. There are a number of artists and historians who comment throughout, one commenting that Stuart's Washington resembled his bubby in Pittsburgh. But again, although we are shown the dollar bill within the documentary, Wolpaw and Gentile never follow the road the image took from Stuart's studio to the Federal Reserve. In fact, we don't even learn how Stuart got the gig in the first place. "First Face" is a light-hearted, enjoyable bit of background about something most of us see every day without considering, but it leaves a lot of unanswered questions. Good thing the directors will be on-hand at the MFA during its screening as part of their 'Art on Film' series for post film discussion.