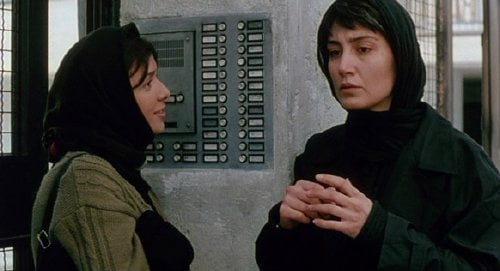 A young maid, Roohi (Taraneh Alidoosti), is sent on a job for new clients, Mozhde (Hedye Tehrani) and Morteza (Hamid Farokhnezad). When she arrives at the apartment, it is in shambles and she finds herself in the middle of a family quarrel in “Fireworks Wednesday.”

Since his global breakout with "A Separation" and "The Past," Iranian writer/director Asghar Farhadi's earlier films have been receiving U.S. distribution. In 2015 we got his fourth film, 2009's "About Elly." Now we see his third, 2006's "Fireworks Wednesday" and if there is one thing we can take away from Farhadi's oeuvre, it is that marriage is a minefield. Roohi (Taraneh Alidoosti, "I Am Taraneh, I Am Fifteen Years Old") is a young girl about to be married. She gets a lift into Tehran from her fiancee to earn some extra money cleaning an apartment. What she finds is a couple in distress, husband Morteza (Hamid Farokhnezhad) at wits end over his wife's unraveling. The wife, Mozhde (Hediyeh Tehrani), believes he is cheating on her and is refusing to accompany him on the New Year's trip to Dubai he's arranged at her behest. Learning that the young girl is about to be a bride, Mozhde arranges for her to visit Simin (Pantea Bahram), a hairdresser who works from an apartment in their building. Roohi is charmed by Simin, but learns she is being evicted because of complaints from the neighbors. Mozhde then sends Roohi to pick up her young son at school while she goes to spy on her husband at his work. He beats her on the street. Farhadi keeps reconfiguring these four central characters, trailing one to change his scenes, each time unveiling bits of information that keep changing Roohi's loyalties and ultimately lead to his climactic revelation. It's an artfully told tale, looping and relooping secrets and lies. The film's title comes from a promise Morteza has made to take his son to see the fireworks, manic street scenes loaded with symbolism. Grade:

This 2006 film by writer/director Asghar Farhadi is the genesis of what he would explore in his later films like “A Separation” and “The Past” – marriages gone bad. “Fireworks Wednesday” lacks the maturity that the filmmaker will develop in his later films but it does establish the filmmaker to be and the techniques and methods he would develop more fully later. The disintegrating marriage between Mozhde and Morteza is seen in this day-in-the-life examination through the eyes of Roohi, a young woman who is about to get married. She is enlisted by Mozhde to spy on a hairdresser, Simin (Pantea Bahram), who lives in the building that she suspects of having an affair with her husband. Roohi, naïve to the intrigues of married life, shifts loyalty and understanding as the day, and marital tensions, unfold. The problem with the story, though, is how much trust Mozhde puts in Roohi during the course of the day, even entrusting the total stranger to pick up her son at school. I understand the stresses she undergoes – in the midst of her marriage falling apart she has to get ready for a vacation to Dubai the next day. This is one helluva day in the life and shows a great deal of enthusiasm by the much younger Asghar Farhadi.