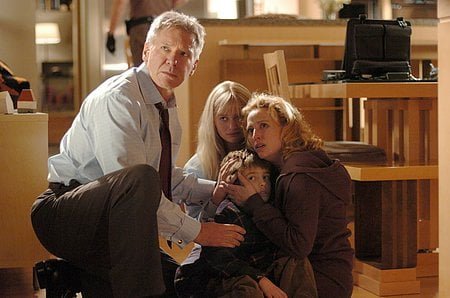 Jack Stanfield (Harrison Ford) is the top-ranking computer security executive for the Landrock Pacific Bank in Seattle. He designed a high tech system to protect the enormous assets the company controls. But, there is one flaw in the system. Jack Stanfield. When his family is taken hostage by a determined team of criminals led by Bill Cox (Paul Bettany), Jack must either extort the ransom demands from his company or use his computer skills to stop them in “Firewall.”

Jack Stanfield (Harrison Ford, "Hollywood Homicide"), the senior vice president of Landrock Pacific Bank security, is already on rocky ground with Gary Mitchell (Robert Patrick, "T2," "Walk the Line"), a delegate from Accuwest, the bank that is acquiring them, when he is targeted by Bill Cox (Paul Bettany, "Wimbledon"), a thief who spies an opportunity. Cox and his team discredit Stanfield's reputation and take his family hostage so that Jack has no recourse but to transfer millions to Cox's account from behind his Landrock Pacific's "Firewall." Except that this hack job of film doesn't even have the smarts to include or make mention of firewall technology. Instead writer Joe Forte creates a witless working world whose security expert doesn't safeguard his own identity from theft and whose IT techs are amazed at their VP's ability to reconfigure routers. "24's" Mary Rajskub plays Jack's secretary Janet in a hairdo so elaborately hideous it would require hours to assemble, yet when she's fired by Jack (forced to by the bad guys of course) she dyes it bright pink, listens to edgy music and drives the sort of car a college student might have. Cox initially approaches Stanfield through Jack's most trusted coworker Harry (Robert Forster, "Jackie Brown") as a congenial entrepreneur hoping to poach the security expert to head up a new consulting firm, but when their friendly after work drinks meeting is over, Jack is astonished to find the man in his back seat pointing a gun. He arrives home to find Cox's associates in charge and his family bound and gagged. The next morning he's allowed to leave, outfitted with a camera pen to track his every move while he executes Cox's plan. Jack attempts to outwit them by surreptitiously switching the pen into Janet's pocket, but he's found out and the angered Cox arrives in the office to act as Jack's escort. There's only one more problem - the maintenance terminals Cox had counted on being in the computer room have been removed by Accuwest, so a new scheme must be cooked up as a suspicious Mitchell trails from one step behind. Since the late 1980's, the best one can hope for from Ford is an over the top commercial product ("Air Force One"), otherwise he delivers the same doggedly cranky performance. "Firewall" is not more of the same, but lower echelon more of the same. It is unfortunate that Virginia Madsen chose this vehicle for her "Sideways" followup and all that can be said for the usually reliable Rajskub is that she didn't have to veer much from the 'Look out, Jack!' dialogue she delivers on "24." Director Richard Loncraine has let down a fine roster of actors, including his "Wimbledon" star Bettany who has never been less interesting than he is here (and he's the villain!) and Forster and Alan Arkin ("Thirteen Conversations About One Thing") in roles so small one wonders why talent of their caliber was called for. As Stanfield's kids, Carly Schroeder, who was so terrific in "Mean Creek," is thoroughly bland and Jimmy Bennett of 2005's "The Amityville Horror" is as annoying as his cliched life-threatening peanut allergy. One wonders how much "Firewall" was edited down, because surely there is a scene missing that explains why cold-blooded criminals would take the yapping family dog on the run with them - surely not to be located by the GPS device implanted in its collar. Once Jack tracks his threatened family down again, he's called upon to go into action hero mode and there's a lot of crashing through boards, fires and explosions. "Firewall's" last shot seals its fate entirely, a ludicrous cliche on par with Spielberg's "War of the Worlds" finale. At least Spielberg's film was entertaining until that point.

Firewall” is a combination of a mini “Die Hard” with its high tech burglary scheme and the low-rent remake of “Desperate Hours” with a family held hostage. Unfortunately, this combo thriller is neither compelling nor thrilling. Jack and his architect wife Beth (Virginia Madsen) live a life of well-off comfort in their beautiful Seattle home. His company is on the verge of a lucrative merger and things look good for the Stanfield family. That is, until Bill Cox arrives on the scene to inform Jack that his family is being held to the tune of $100 million – a sum that Jack must steal from the bank. This begins a deadly cat and mouse game that pits Jack and his high tech knowledge against a foe also versed in manipulating technology. Harrison Ford is getting too old to be the action hero anymore. He does give a game attempt with the physicality of the role of Jack Stanfield but, during the course of “Firewall,” he really looks like he’d rather be home with a nice warm milk and scotch while Calista rubs his feet. The actor, though one of the biggest box office draws over his long career, has never really risen far above the two-dimensional. Looking back through Ford’s filmography, one finds a sameness of character in his performances. In Firewall,” this tradition continues. Paul Bettany goes through the motions as the high-tech robber but never takes on the sinister tone that the ruthless felon should exhibit. Alan Rickman did a far better (and much more fun) job as the bad guy leader, Hans, in “Die Hard.” Virginia Madsen is a disappointment in her follow up to her wonderful performance in “Sideways,” playing the stoic wife. The supporting cast is peopled by such veterans as Alan Arkin (completely wasted), Robert Patrick (wasted, too) and Robert Forster (relegated to a McGuffin role that only distracts the viewer.) The rest of the cast, from the Stanfield children Sarah (Carly Schroeder) and Andrew (Jimmy Bennett) to Cox’s henchman (Matthew Currie Holmes, Ken Tremblatt and Vince Vieluf) fit the bill okay enough but nothing memorable happens. Mary Lynn Rajskub, as Jack’s put upon assistant Janet, does little more than reprise her role on TV’s “24.” Product placement is rampant in “Firewall.” Dell Computers and the Chrysler Corporation must have forked over a good bit of promo money for this venture. Watching the movie, you’d think that the manufacturers were the only companies making computers and cars in the world – Janet even drives a 70’s vintage, beat up Plymouth. Production aspects are solid enough but the script, by Joe Forte, holds no surprises and has a lot of suspension of disbelief required. And, he uses the sappy device of involving the family dog in the action. Director Richard Loncraine (“Richard the Third” and “Wimbledon”) shows no flair for an action genre film. Firewall” is the kind of ho-hum winter doldrums film that begs for you get something classic from NetFlix – if you can, I recommend the terrific 1955 “Desperate Hours”, with Humphrey Bogart and Fredric March, that is much like “Firewall,” story-wise, only far better. And they never even use the word “firewall” during the course of the film. What’s with that?