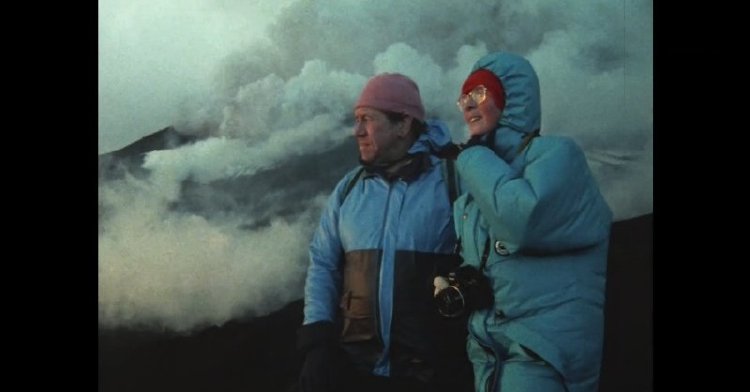 No one’s quite sure how Katia and Maurice Krafft first met other than it was in Strasbourg during the 1960’s, but as she, a geochemist whose parents had indulged her fascination with Mount Etna as a teen, and he, a geologist who first visited Stromboli when he was 7, were both so obsessed with volcanoes, it surprised no one when they wed in 1970 and made the subject it their life’s work in a “Fire of Love.”

Director Sara Dosa’s award winning documentary about a married couple who traveled the globe to observe, photograph and film erupting volcanoes from dangerously close vantage points is first and foremost a visually magnificent collection of the Krafft’s archived footage which should be viewed on the biggest screen possible.  The film immediately intrigues with its opening tease of its tragic ending, narrator Miranda July (“Me and You and Everyone We Know”) noting that June 2, 1991, will be the couple’s last full day on earth.  Yet, although we learn that Katia was more interested in detail and still photography while Maurice preferred to wander taking moving footage, we never learn much more about what made this couple tick.  We see them as talk show guests separately just as often, if not more, than we see them together.

Calling volcanology a ‘science of observation,’ the Kraffts supported themselves with books, largely compiled by Katia with her photography, and films which Maurice toured with on lecture circuits.  They thrilled to the beauty of red volcanoes, those caused by the pulling apart of tectonic plates which spewed fiery plumes of lava (Maurice dreamed of building a canoe which could withstand a lava river so he could ride down one), yet they became part of the 25% of volcanologists who specialized in gray volcanoes, the killers caused by the collision of tectonic plates which spewed clouds of hot gas and volcanic matter.

In studying how the combination of minerals, gas, heat and time resulted in eruptions, the Kraffts warned of potential catastrophe in Columbia, but the government failed to respond, citing the expense of an evacuation plan.  When 25,000 were ultimately lost in 1985, the couple’s documentation of the devastation there convinced other governments to take heed of volcanic risk analyses going forward.

They were daring, the lone explorers of Anak Krakatau, a ‘child’ of the infamous Krakatoa, when it began to belch.  They once took a rubber raft out onto an acid lake and barely made it back to shore.  Maurice voices a fateful philosophy, one which would catch up to them on Japan’s Mount Unzen, an event when finally told comes across as anticlimactic due to July’s monotonous reading, an enervation Dosa’s selected footage mostly overcomes.

“Fire of Love” conveys the couple’s passion for their shared study, but their marriage itself, while appearing affectionate in photos, is left something of a mystery.  Dosa has essentially curated the material they left behind, editing to a scripted timeline and supplementing with archival interviews.  The image of Katia in the protective suit which gave her the profile of Robbie the Robot standing perilously close to the mouth of volcano spewing liquid molten lava into the sky is the fire of a unique obsession.

Katia and Maurice Krafft had the distinction of being the only volcanologist couple in the world. During their two decades of studying volcanoes, they have explored and documented hundreds, until one day they just got too close to the “Fire of Love.”

The Krafft’s story begins with them driving across a rugged, cold and snowy tundra to explore their next volcano. Then, their story, told by director Sara Dosa and narrated by Miranda July, is told from their early days in the volcano biz, their meet and fall in love and their decades-long journey around the world to study the fiery and extremely dangerous subjects.

“Fire of Love” does one thing that is fascinating and awe-inspiring – it shows us the power, beauty, majesty and constant danger of volcanoes. We learn that there are two types of volcanoes – red (friendly) and grey (killer) – and the difference within each type. The Kraffts documented their many explorations, with Katia the still photographer and Maurice the man behind the video and film cameras and bring us up close and personal to the very edge of the fiery precipices.

Dosa’s documentary reminded me a lot of Werner Herzog’s 2005 fascinating and chilling work, “Grizzly Man,” about Timothy Treadwell, the long-time bear researcher who reached, quite literally, grizzly ends with his girlfriend. In both films, we have investigators of dangerous phenomenon whose end is caused by “getting too close” to their subjects.

While “Fire of Love” is stunningly beautiful to watch, it does not bring us any deeper than the surface venire of the Kraffts. We get a good sense of their dedication to their craft and the dangerous lengths they go. But. I never get the sense of “them,” who they are and how they tick. This is due, quite likely, to the total use of their video material to tell their story combined with talking head interviews, but never of the Kraffts. The volcanologists are fascinating but I never felt like I got to know the couple. I should have.

Neon opens "Fire of Love" in select theaters on 7/6/22, expanding in subsequent weeks.