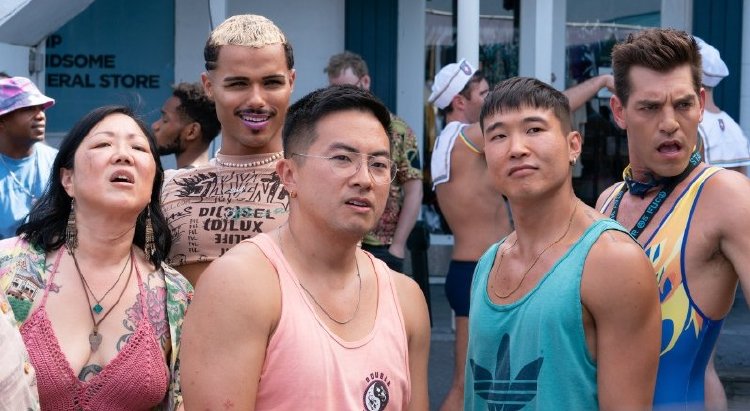 Every year, five friends gather for a week they all look forward to, but this year Noah ('The Other Two' producer Joel Kim Booster, who also wrote the screenplay), who believes it is a gay man’s birthright to get laid at their destination, has declared he will remain celibate until his best friend, the more romantic and far less muscular Howie (SNL's Bowen Yang, touching), has sex first.  That is not the only ticking clock the group will contend with as their good friend and hostess, Erin (Margaret Cho), reveals that money mismanagement means she will have to sell the lovely home that houses them on “Fire Island.”

The first thing we hear - ‘It is a truth universally acknowledged that a single man in possession of a good fortune must be in want of a wife’ - a line from Jane Austen’s “Pride and Prejudice” is immediately disputed by Noah, he and his friends wanting nothing to do with female romantic partnership, but Noah, Howie, Luke (Matt Rogers, Showtime's 'I Love That for You'), Keegan (Tomas Matos) and Max (Torian Miller) all have something in common with Elizabeth Bennett and that is their racial makeup and blue collar status on a gentrifying island.  One could also include intelligence and wit, three of the five revealed as avid readers while Keegan and Luke love to dance, a favored Regency era pastime.

No sooner do the lads descend on a local outdoor watering hole, than Noah notices Charlie (James Scully, TV's 'You,' charming) noticing Howie.  The good looking Charlie waves, Howie becomes incredibly flustered and Charlie and his friends, the snobbish Cooper (Nick Adams, TV's 'The Other Two') and Will (Conrad Ricamora, TV's 'How to Get Away with Murder,' an intriguingly uptight Mr. Darcy type), join the lads for their traditional sundown countdown, where Howie invites them to a party at his house on Ocean Walk.

One look at the doctor’s ‘house’ and the gang decides to ditch their gift of cheap rosé, and while Charlie is not only welcoming, but seeks out Howie for extended conversation, the rest of the group doesn’t fare as well, Charlie’s wealthy circle looking down their noses at them.  There is particular friction between Noah and Will and by the time Luke hurls into an ornamental vase, it’s clear the lads must leave.  Except that Howie is nowhere to be found.

Noah will return the next day in search of his friend who spent the night in a luxurious bathtub, the victim of ‘expensive booze,’ but more importantly his and Will’s friction begins to turn into an obvious spark before the obstacle known as Dex (Zane Phillips, this film’s George Wickham) throws a monkey wrench into the works.  And while Charlie is clearly interested in Howie, the insecure romantic will be disillusioned when the doctor’s friends pair him up with Rhys (Michael Graceffa), even if Charlie’s behavior signals no interest.

With the exception of its Asian racial subtext, director Andrew Ahn does a complete 180 from his sensitive, moving "Driveways" with this fast-paced piece of frothy summer fun.  The film earns its R rating with several backdrops of energetic sex, but despite underwear parties and the Black Room, the focus is on romance, even to the surprise of Noah.  And while their hostess has lost the fortune won from ‘eating a piece of glass at a large Italian restaurant chain,’ the film’s climactic grand romantic gesture all but assures the gang’s return.

Howie (Bowen Yang) has never found love and romance. His BFF, Noah (Joel Kim Booster), with their summer vacation fast approaching, makes it his mission that, this year, his best friend will finally find what he has always longed for on “Fire Island.”

This is a good-natured gay comedy that has likable, if stereotypical, characters getting themselves into “situations” as Noah tries to help his best buddy find true love. As such, this lightweight little farce – based on “Pride and Prejudice” - has all the elements we expect to see and nothing unexpected happens during this frothy comedy. But that is OK.

Andrew Ahn directs this light and bubbly cliché, written by Joel Kim Booster doing double duty as scribe and star, Noah. There are no surprises in the story and things progress in way too stereotypical ways. As such, most of the characters lack dimension and everyone goes through their paces in light humor.

“Fire Island” is a good summer escape with its message of “we are all in this together.” There is not a lot of depth of character and story but its lightness of heart is a plus.