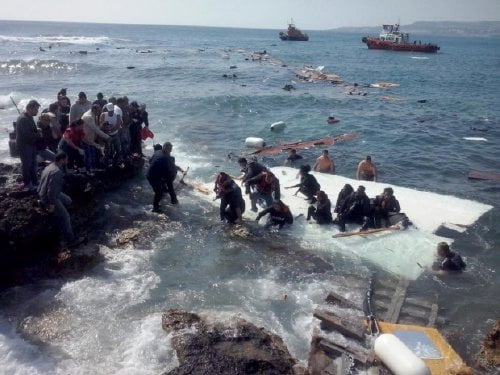 200 kilometers off of the southern Italian coast, the island of Lampedusa is the first port of call for hundreds of African and Middle Eastern who, every day, seek asylum and a future in Europe. Documentary filmmaker (Gianfranco Rosi), shows not just the plight of the refugees, but also the day-to-day life on the island for the locals, in ”Fire at Sea.”

Documentary filmmaker Gianfranco Rosi takes a European, if not world, tragedy and turns it into a cinema verite study of life on Lampadusa for both the locals, who lives their lives as normally as possible, and the tens of thousands of refugees from northern Africa and Syria seeking asylum. As such, “Fire at Sea” takes its time to establish the two very different worlds that inhabit the same physical space. The locals, fishermen mainly, perform their daily toil to make a living. Long sequences spend time on the life of the permanent inhabitants of the island, which has been the first port of call for some 400000 refugees since the crisis began. The relatively normal lives of the locals are contrasted by the frantic attempts of the desperate refugees to reach the “promised land.” The heroic rescue efforts of the government, particularly the Italian Coast Guard, bear the brunt of the deluge refugees. The survivors and their processing into Europe is shown, but the cost of the migration is also given shrift as the rescuers, at one point, board a rickety boat only to find many dead stacked below deck. The filmmakers are, more, trying to show the life on a once sleepy island that has become the focus of humanitarian efforts than making a definitive statement on the refugee crisis – though “Fire at Sea” does that, too, in a very matter of fact manner.