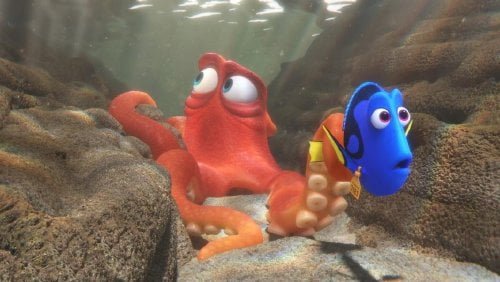 A year after finding Nemo (voice of Hayden Rolence), Dory (voice of Ellen Degeneres), the blue tang with short-term memory loss who befriended his father Marlin (voice of Albert Brooks)in his quest, is living happily in their reef when a stingray migration sparks a memory of her mom and dad. She recruits them to accompany her across the Pacific to California’s Marine Life Institute, but she gets lost on the way to "Finding Dory."

Cowriter (with Victoria Strouse)/director Andrew Stanton brings back the lovable Dory and the clown fish who gave her a home along with a host of new characters including the misanthropic 'septopus,' Hank (Ed O'Neill, TV's 'Modern Family'), an octopus with a missing tentacle and talent for camouflage and escape. There is a lot of heart here and plenty of laughs, but it is disturbing that some of them are offered up by the bullying of a mentally handicapped sea lion by two others, Fluke and Rudder (voiced by Idris Elba and Dominic West), especially given the sensitive handling of Dory's affliction. A prologue gives us Dory's back story, her parents Charlie (voice of Eugene Levy) and Jenny (voice of Diane Keaton) doing everything in their power to keep her safe without harming her self esteem. But she gets caught in an undertow and dragged out into the ocean, wandering and lonely until she meets the distraught Marlin. In the present on the Great Barrier Reef, she's Nemo's hero and Marlin's constant source of worry. He has no desire to ever go out over the precipice again, but Dory's plea reminds him of his own former turmoil. With the help of his old sea turtle buddy, the three take off across the Pacific, but just when they get to their destination, Dory upsets a sleeping monster which almost kills Nemo. Marlin harshly tells her to wait 'over there' and once again, Dory is lost, scooped up by a net, history repeating itself in front of Marlin's eyes. Informed by Fluke and Rudder than Dory will have been put in MLI's quarantine facility, Marlin and Nemo literally take flight, transported into the facility by a balmy bird and a pail of water. The film's second act shuffles back and forth between Dory, who's made a deal with Hank to get to her parents in the Open Ocean exhibit, and Marlin and Nemo, always a step behind. Although the filmmakers have come up with various mini-adventures to move their characters from place to place, this part of the movie begins to feel repetitive. It does feature one of the film's best sentiments though. In a seemingly insurmountable situation, Nemo wonders 'What would Dory do?,' teaching his dad once again that Dory's handicap enables her to think outside the box, accomplishing the impossible. The third act involves a crazy land/sea escape and retrieval mission, aided by the echo location of beluga whale Bailey (voice of Ty Burrell, TV's 'Modern Family'). And yes, Dory/Degeneres once again gets to 'talk whale.' There is much to love here. The young ones will witness the danger of plastics in the ocean, respect for other creatures (in the horrific 'touch' tidal pool exhibit) and learn about these amazing sea animals. The animation is often breathtaking, with photo realistic representations of water and glass. Hank is one of the best characters Pixar's ever brought to life, aided by O'Neill's grumpy-with-a-heart vocalization. 'Holy carp!' indeed. "Finding Dory" isn't as great as its predecessor, but as sequels go, it's more than good enough. It's also being shown with one of the best Pixar shorts in years. "Piper" tells the tale of a hatchling bird being weaned by mom into feeding itself. Fearful of incoming waves, the little sandpiper learns a trick from a hermit crab. Pixar animator Alan Barillaro has crafted six minutes of pure joy, a humorous, stunningly animated short (it began as a proof of concept for a new animation tool) with a huge 'awwww' factor. "Finding Dory" Grade: B+ "Piper" Grade: