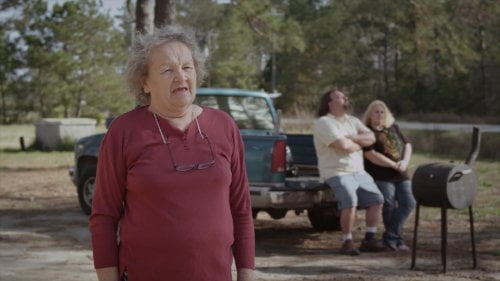 Shannon Whisnant purchased a used barbecue smoker grill at an auction but, when he got home, he realized he bought more than just the grill. Under the lid, he found an amputated, embalmed leg. Whisnant sees the severed appendage as a way to feed his need for fame, but the previous owner of the leg, John Wood, puts up a fight for the return of his limb and a media, and legal, battle ensues to decide if it is “Finders Keepers.”

In 2007, Shannon Whisnant bought a smoker at a Maiden, North Carolina storage locker auction. When he got it home, he found something really strange inside, a mummified human leg. Ever the wheeling dealing showman, Whisnant thought he could make his fortunate and find celebrity with his ghoulish discovery, but when he began to hit the airwaves, the leg's owner, John Wood, demanded it back. Whisnant refused to oblige, citing "Finders Keepers." Bryan Carberry and J. Clay Tweel's documentary has to go down in the annals of weird Americana, but although the filmmakers find multiple angles in their stranger-than-fiction tale, their parallel stories of obsession fail to line up. Whisnant's a true American character, a Southern blowhard whose downward spiral into reality TV mockery has a satisfying arc, but Woods's story, the more tragic of the two, is marred by a failure to get to the heart of just why he equates his amputated leg with the father he lost in the same accident. Whisnant did call the police when he made his find, only to have the leg delivered to a mortuary where it was held for some time. That didn't stop the man from setting up a roadside sideshow, charging $3 for a peek into his now empty smoker ($1 for kids!). Learning just where the leg came from seems to fortify his determination to have it, resenting the fact that Wood was the son of the richest guy in town. Yet the reason Wood lost his leg was due to drug addiction and homelessness, having failed to keep up with his storage fees after his mother stopped paying the bill. In 2004, he had been copiloting a plane with his dad when it crashed and for some bizarre reason, he asked for his amputated leg to use as part of a memorial. He expected skeletal remains, but got the whole thing, so he embalmed it and hung it to dry in the sun (um, why, if he wanted it 'stripped?'). He also claims he didn't want it exhibited by Whisnant, which also appears to contradict his own plans for it. So as 'the foot guy' tries every which way to lengthen his 15 minutes of fame, we learn of Wood's struggles and splintered relationship with his family. A sister informs us he became famous at just the wrong time, the family dismayed to see their obviously drunk and stoned John appearing on talk shows. Carberry and Tweel push coincidences between their two subjects (disciplinary fathers, bum right legs), but they are tenuous, as is their central irony that Whisnant's bad behavior kickstarted Wood's redemption. We do see the leg in the film's last act and it's not a pretty sight, even after it is finally preserved the way Wood had intended. The memorial remains a mystery. "Finders Keepers" isn't as funny as it sounds but it sure is a twisty tale, one that garnered international attention. Grade:

Truth is stranger than fiction. You can’t make this stuff up. These are the thoughts that ran through my mind as I watched “Finders Keepers.” This is the kind of documentary that brings to mind another thought: Weird but true. Think about it, you buy a used smoker and find a human leg. What would YOU do? “”Finders Keepers,” directed Bryan Carberry and Clay Tweel, answers that question with Shannon Whinsant, a flagrant self-promoter who and sells admissions ($3 for adults, $1 for children) to see the grill sans the leg. What follows is the media circus that began a steady climb in popularity, reported as far away as Japan, when John Wood begins his long custody battle to get back his limb. His reason for wanting the leg back brings about its own strange story. As weird as “Finders Keepers” is, the documentarians keep your attention through most of the film. Oftentimes, I found myself shaking my head over the absurdity of the players and their battle and the way media capitalized, once again, on the suffering of others to get a news bite. It is a strange tale and, I have to admit, an original one.