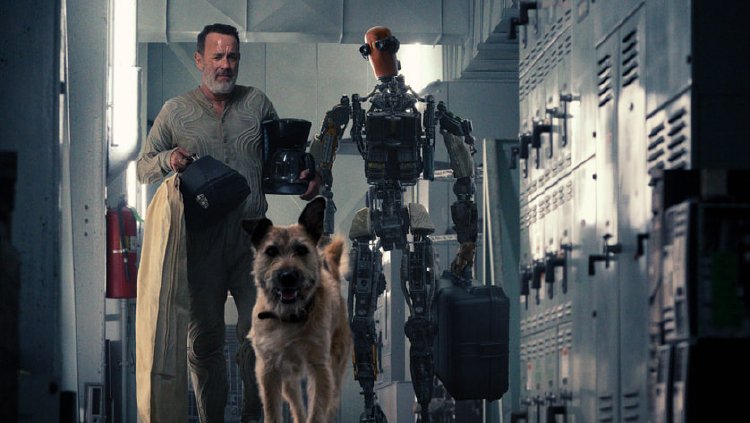 After a solar event leaves Earth an uninhabitable wasteland, a robotics engineer survives with his beloved dog Goodyear in an underground bunker in St. Louis.  Aware that exposure to radiation is killing him, the man builds a robot to ensure the dog is cared for after his death.  With a destabilizing multi-storm comprised of 8 weather events approaching, the three embark on a dangerous journey during which the robot, which names itself Jeff (voice of Caleb Landry Jones), is shown the wonders of being human by his creator, “Finch.”

With their first credited feature screenplay, Craig Luck and Ivor Powell seem to have taken inspiration from everything from “A Boy and His Dog” and “Chappie” to their star’s own “Cast Away.”  Thankfully, director Miguel Sapochnik ("Repo Men") has Tom Hanks and a sweet rescue named Seamus and his decision to just embrace his material’s corniness works in its favor.  This movie is made for anyone who’s ever noted that DOG is GOD spelled backwards.

Sapochnik plunges us right into the reality of Finch’s world as we watch Hanks, clad in what looks like his “Apollo 13” spacesuit, struggle through a landscape enveloped in dust storms as he sings ‘American Pie’ beneath his breath.  He’s accompanied by a robot named Dewey, a motorized cart with a mechanical arm.  But the companion who makes life worth living awaits in his underground shelter, a large yellow terrier just thrilled to see him.

The second robot Finch is building looks like an upside down boxing speed bag adorned with two camera lenses sitting atop a humanoid frame.  It is given a canine version of Asimov’s robotics laws, marvels at its new ‘hands,’ then taught to walk, but before Finch is done with finessing, they are forced to pack up and hit the road in Finch’s well equipped RV.  Although he’s noted cities as problematic, because ‘people,’ he has chosen San Francisco as their destination.

The journey is one, big ticking clock, with Finch’s AI warning of the approaching storm and external temperatures and radiation levels and his own body breaking down.  Perilous adventures will become learning experiences for Jeff, whose stab at initiative results in a terrible loss.  Stops along the way are chances to bond with games of fetch (played, of course, with Wilson tennis balls!), but these, too, provide lessons in patience and trust.

There is a touching and tragic flashback to Finch’s acquisition of Goodyear, one which explains the dog’s profound impact upon the man.  But the film is more about parenting, Finch’s guidance of Jeff like the accelerated raising of a child from toddler (learning to walk) to teen (learning to drive), something that we learn was missing from his own life.  Once again, Hanks carries a film almost entirely by himself, loving with his live companion, strict with his manmade one and resigned to his fate.  And yet it is left to Landry Jones and the dog to end it, accomplished with hope and a human touch.

It is ten years since a massive solar flare destroyed the ozone layer and decimated the earth’s population to near extinction. One survivor is a robotics engineer and he, his dog Goodyear, helper ‘bot Dewey and his newly-invented robot Jeff, must leave their now unsafe lair to escape a coming 155 mph storm that will last forty days in “Finch.”

Finch Weinberg (Tom Hanks) has survived the apocalypse relatively unscathed and alone. The 150-degree outside temperature and deadly radiation keep Finch underground, venturing out only in an exposure suit to scrounge for supplies. Then, he finds out that he is right in the path of the killer storm. They flee the Saint Louis refuge and pick San Francisco as their final destination and safety.

Their journey is complicated by two things. He had invented Jeff to download all the knowledge possible to teach him (I cannot call him “it”) to care for Goodyear. This brings us to the second thing: Finch is dying, so it is a race against the weather and the clock to get to safe refuge. Oh, and the hurried departure force Finch to cut short Jeff’s info download. That is the story, in a nutshell, of “Finch.”

I swear you could have Tom Hanks read obituaries and it would be a thing to behold. So, any movie that he is in is bound to have a pro performance and he does so, quite well, in the tale of a man, his dog and two robots on a quest of survival. It is a man on a mission story and, though a little corny, has a lot of charm.

Robots with personality have been with us for a long, long time, going back to Robbie in “Forbidden Planet,” and Number 5 in “Short Circuit (1986)” and, of course, R2D2 and C3P0. Jeff has enough personality to sit up there with the best of them.