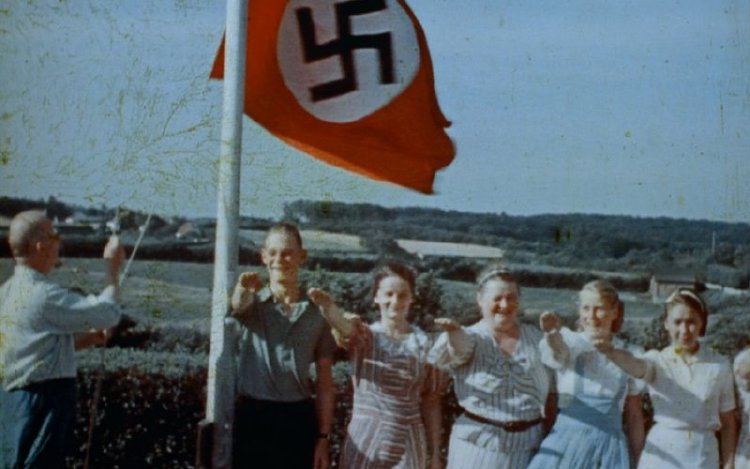 “Monsters exist, but they are too few in number to be truly dangerous.

More dangerous are the common men, the functionaries ready to believe

and to act without asking questions.”        Primo Levi

In 2008, late director Luke Holland began a 10 year project interviewing the last surviving Germans, those born in the 1920’s who lived through Hitler’s Third Reich.  Kicking his resulting documentary off with the Primo Levi quote noted above, Holland digs into the ‘banality of evil’ within the ordinary citizens who comprised the country-wide network which supported the Holocaust, from the payroll clerks who noted the unpaid hours of concentration camp workers to the railroad cargo supervisor who logged the contents of cars headed to Auschwitz.  Parallels to today’s right wing extremism are chilling and there are many examples.

He begins with someone singing the Nazi rendition of ‘Night of the Long Knives,’ the singer casually remarking that they thought nothing at the time of lyrics about gutting Jews.  Equally disturbing is the man who remarks that ‘the Jews weren’t very popular and unfortunately that had consequences.’  Asked why they weren’t popular he responds that ‘apparently they were deal-makers.  They had hooked noses.’  A group of women at a nursing home begins with excuses with why they joined Hitler youth groups – access to restricted parks and swimming pools – before going all in with fond reminiscences of singing songs and hiking.  One of the group claims she never knew what was happening at the camp just outside their town, then later contradicts herself, saying it was spoken about ‘quietly.’  (One man, Kurt Sametreiter, accuses anyone of claiming innocence of what was happening a liar.)  A member of the Waffen SS is clearly still chuffed about the group’s elite status.  More than one former SS officer claims that the SS had nothing to do with the Holocaust – they were all fighting for the Fatherland on the front lines(!).

One person clearly disturbed by the memory recalls childhood alphabet characters designed to portray Jewish stereotypes, one letter depicting a despicable ‘oily’ character with his hand inappropriately touching a blonde German woman and we remember that Hitler studied the racial propaganda used in the Jim Crow South.  Another talks of Kristallnacht and being dumbfounded watching a Fire Brigade do nothing as a synagogue burned to the ground – just as many of us recently couldn’t believe our eyes watching Capitol police taking selfies with and opening barriers for insurrectionists.

Perhaps nothing is as alarming as seeing an old SS officer refuse to condemn Hitler, saying the man had ‘the right idea,’ followed by another, Hans Wierk, who, ashamed of his own complicity, confronts a young neo Nazi nationalist at Wannsee.  This young man, who refused to allow his face to be seen, accuses Wierk of being afraid of his German heritage when he should be afraid of being stabbed by an Albanian on a bus.  ‘Do not be blinded,’ warns Wierk, his voice shaking with emotion (one wishes he’d gone further, explaining the tactic of directing anger at ‘the other,’ another recent U.S. right wing political maneuver).

Holland uses archival stills and footage, much of it all the more vivid for being in color, to flesh out his present day interviews.  Subjects date of birth and subsequent rank or organization are graphically superimposed as their introduction.  We hear the filmmaker’s voice questioning his subjects and begin to see his theme form – just when does someone become complicit in a crime, a perpetrator?  Most dance away from responsibility, some grudgingly allowing complicity.  A man who became a guard at Sachsenhausen at sixteen to avoid his labor service claims to ‘have gotten out of there’ at the first opportunity, excusing himself.  Wierk, who earlier tells of being indoctrinated into Nazism from the age of six by a teacher who was a party operative against his parents’ wishes, is one of the only ones to take full responsibility.

When Hitler came to power his enemies were rounded up and intellectual opposition disappeared, we are told.  ‘These heroes you expect to find, there aren’t many of them.’  “Final Account” is a wake-up call we’d never anticipated needing after the horrors of Nazi Germany.  It is an important slice of history retold, through lenses still focused and those fogged by their own gaslighting.

It has been 71 years since VE Day and the liberation of Europe from the Nazi stranglehold. The German survivors of that war, from former Waffen SS soldiers to the civilians who bore the burden of the defeat, tell us what they thought then and think now in their “Final Account.”

Directed by Luke Holland (who died shortly after the film’s completion), “Final Account” is a compilation of interviews, taken over ten years, of those participants, willing and unwilling, in Hitler’s Third Reich. I had a preconceived notion, so long after the war, that the participants on the German side, soldier and civilian, must see that it was a perpetrated horror. Then, I remembered a conversation I had, many years ago, with a man who was once a member of the Waffen SS. When I asked the question, “How could this happen?” His response was “You weren’t there; you don’t know what it was like.”

Director Holland, with his broad array of perpetrators and survivors of Hitler’s Germany, gets an equally broad set of opinions. For the former Waffen SS, service was an honorable thing and they never dirtied their hands with the extermination of the Jews. For others, it was a matter of “following orders,” and, for most civilians it was “we didn’t know anything about it.”
This is a powerful document on how evil can encompass an entire people. Keep in mind, if you do not remember your history, you are likely to repeat it. Posthumous kudos to Luke Holland for making us remember.