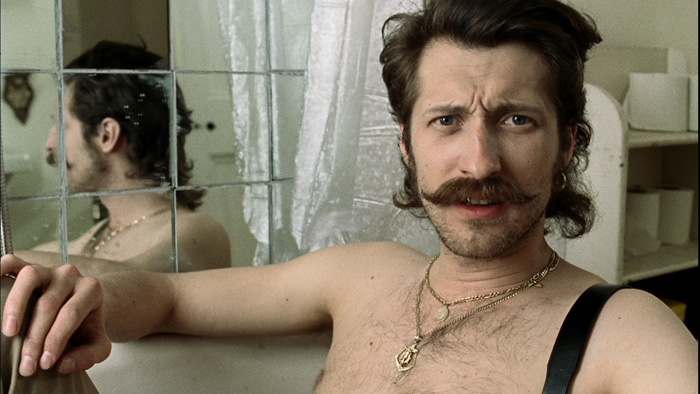 Three flatmates struggle to get by in London. A.K. (Eugene Hutz) is a man-whore who makes a living catering to masochistic men. Juliette (Vicky McClure) works as a pharmacist assistant and dreams of going to Africa to help starving children. Holly (Holly Weston) had dreams of being a prima ballerina but circumstance forces her to audition for a job as an exotic dancer. This unlikely trio work, always, to help and care for each other as they transition between “Filth and Wisdom.”

Ukranian A.K. (Gogol Bordello lead singer Eugene Hutz, "Everything Is Illuminated") is trying to get his band into the big time, but makes his living staging S&M fantasies. Roommate Juliette (Vicky McClure, "This Is England") dreams of helping starving African children but lifts prescription drugs at her job in a pharmacy. A.K. advises their other roommate and his secret love Holly (Holly Weston), a broke ballet dancer, to take up stripping because, as he reasons, saintliness is the other side of sinning. It's all about balancing "Filth and Wisdom." Cowriter (with Dan Cadan)/director Madonna makes her debut behind the camera and it seems like she's learned little while in front of it. Not surprisingly, the musical selections are fittingly raw but with the exception of supporting actress Francesca Kingdon (BBCA's "Footballers Wive$: Overtime") everything about the film is amateurish. Given the film's predilection for S&M, pole dancing, cross dressing, starving African children, pretentious yet simple philosophical observations, a 'cover' of a Britney Spears video and even gap teeth, one only wonders at film's end where the overt Catholic symbolism was hiding, and yet as much as we can see Madonna in her first film, it is surprisingly naive. Directly addressing the camera, A.K. tells us that despite a list of faults, he'll be going to heaven because he tells the truth, but that you cannot get to heaven without having gone to hell first. Apparently Madonna's carving out an entry through the pearly gates by excusing all her sexploitative behavior as the necessary path to goodness. A.K. beats a groveling man, rides another in a saddle, runs errands for the blind poet (Richard E. Grant, "Penelope") downstairs and hallucinates about his abusive dad from the old country (Olegar Fedoro, "Eastern Promises"). Juliette, an Ellen Degeneres lookalike with mannishly cropped hair, is the object of her boss, Sardeep's (Inder Manocha of the gap-toothed grin) desire, but it is clear from the way he fondles her coat that her prescription lifting will soon be discovered. She also has an awkward relationship with sister Chloe (Clare Wilkie), who has apparently stayed with the paternal abuse situation that Juliette is currently fleeing. English rose Holly attends ballet class but heads to a gentleman's club where owner Harry Beechman (Stephen Graham, "Goal! The Dream Begins," "This Is England") takes a shine despite her disastrous audition. He directs old hand Francine (Kingdon) to teach her the ropes. There are also two marriages in dire need of saving - Sardeep's wife (Shobu Kapoor, "Van Wilder 2: The Rise of Taj") is under constant siege by their six children and reacts by screaming for his attention. One of A.K.'s clients, Benjamin Goldfarb (Elliot Levey), is the meak husband of a large, overbearing mate (Hannah Walters, "This Is England"). (Both of these added on subplots are happily-ever-aftered all too easily, as is the whole kit and kaboodle.) Madonna's lead female thesps are both loved by the camera, but neither appear to be actresses under her direction. Hutz chews scenery voraciously, but he can be a funny egoist and he's terrific in his 'day job' fronting his Gypsy punk band Gogol Bordello. The film's most experienced actor, Grant, is saddled with one of its least well conceived roles, a depressed poet who hasn't written since he lost his sight (but dances for joy when he hears his lyrics sung by A.K.!) Kingdon is the only cast member who resembles a real person and Ade ("Snatch," "Casino Royale") adds some character as Beechman's grinning DJ. To be fair, there is the occasional chuckle to be found in "Filth and Wisdom," but on the whole it is too loud and brassy, poorly structured and self promoting. Maybe there's a filmmaker in Madonna, but she needs a stronger producer and writer to help her evolve her material and vision. This first pass doesn't pass film school muster.

I went in to see “Filth and Wisdom” pretty cold. I vaguely knew the plot synopsis but knew little else. When I left the theater, I felt that I had seen a so-so film by a newcomer filmmaker who is cutting teeth. Yes, “F&W” is by a first time director but not a novice to film. Madonna, who has had years of experience with films and videos and spent years married to Guy Ritchie, not a slouch in creating interesting, exciting films. I was even more disappointed than if the maker had no experience. F&W” starts off with A.K. talking directly to the camera, setting the tone of the film by telling us that ignorance and knowledge (AKA filth and wisdom) are two sides of the same coin. We meet his roomies, Holly and Juliette, and enter their lives, learning about the wants and desires of each. The problem is, you never really get to like these two dimensional characters or their predictable predicaments. I liked Eugene Hutz when I first saw him as the swaggering Ukranian tour guide in “Everything is Illuminated.” He plays a similarly swarthy character as A.K. and I, again, like the actor. The character, on the other hand, grew annoying as the stories wore on. His costars, especially Holly Weston as wannabe stripper Holly, are lovely to look at but never develop into real people. Inder Manocha as Juliette’s boss at the pharmacy, Sardeep, does a solid job as a harried, oft-scolded husband who harbors a crush on his assistant. I cared more about Saredeep than the three stars combined. Francesca Kingdon, as Holly’s exotic dancing mentor, Francine, is the best, most honestly likable character in the film. The script, by first time feature scribe Dan Cadan, has a lot of plotlines going on but the execution is wooden and predictable. It starts out with each of the principals’ live showing that they are, indeed, in the sordid filth. A film about man-whores, sadomasochism and desperation that will drive the individual to any and all lengths is, in fact, almost totally devoid of the titular “Filth.” What happens, instead, is the lives of the trio make the expected turn, their “Wisdom” secured, and they live happily ever after. Madonna’s directing debut shows that the megastar did not learn a lot about film craft and creates a routine, occasional amusing debut oeuvre. It should have been a more mature work and it is not.