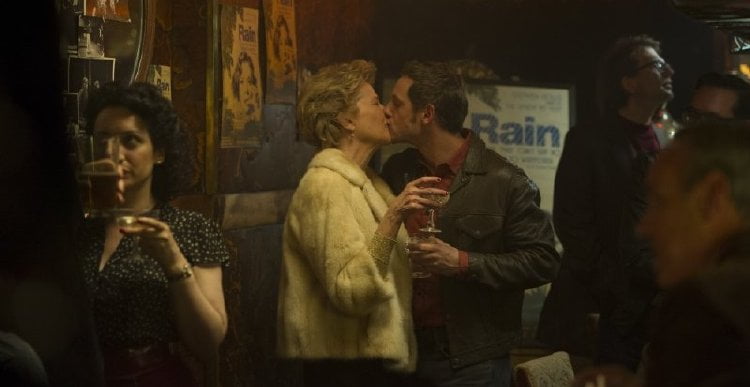 Once an Oscar-winning Hollywood movie star, Gloria Grahame (Annette Bening) now performs on the 1970s Liverpool stage and lives in a boarding house. There, she meets much younger Peter Turner (Jamie Bell) and a May-September romance blooms in “Film Stars Don’t Die in Liverpool.”

Gloria Grahame was a distinctive femme fatale both on the screen in such classics as "In a Lonely Place" and off where she notoriously wed the son of her second husband Nicolas Ray during her fourth trip to the altar. "Film Stars Don't Die in Liverpool" focuses on a late fling with another much younger man, Peter Turner, whose memoir provided the basis for this film. Annette Benning doesn't much resemble the actress, but her breathy delivery and melding of wounded bird and show biz survivor is a startling facsimile. Jamie Bell's turn as Turner is equally adept, a cocky young man knocked out by the older screen siren. As in her "20th Century Women," Benning once again seduces a younger man with her dance moves, she and Bell grooving to each other and a disco beat. But director Paul McGuigan ("Victor Frankenstein") can't find the hook to elevate this story - we're left wondering why we should care about watching a fading film star die in a middle class Liverpool home (whose matriarch, Peter's mum, is played by Julie Walters). Grahame's past is only hinted at when she takes Peter on a trip to her own home in Southern California. Grade:

Based on Peter Turner’s memoir, “Film Stars…” spans the last years of actress Gloria Grahame’s life. The former movie star had survived four failed marriages, gave birth to four children, battled cancer and lost her once-promising career. Now, in her fifties, she struggles to find work, taking any acting job she can, including a play revival in the titular town. There, she ends up in a boarding house run by Bella and Joe Turner (Julie Walters and Kenneth Cranham) and meets handsome, young Peter, a struggling actor. Annette Bening, though she does not actually resemble Gloria Grahame, roots her performance in the melancholy and hope of a woman who was once on the cusp of true fame, only to have it dashed by bad life decisions. Peter represents the youthful link to that past as their romance takes hold and a short idyll ensues. Bening’s is a real character study and conveys the bundles of emotions and memories of an actress at the end of her career. Jamie Bell’s Peter is the foil, who gives, through his devotion to Gloria, the love she needs and deserves. There is sadness to the story but also a joy of someone who, in the end, is loved unconditionally.