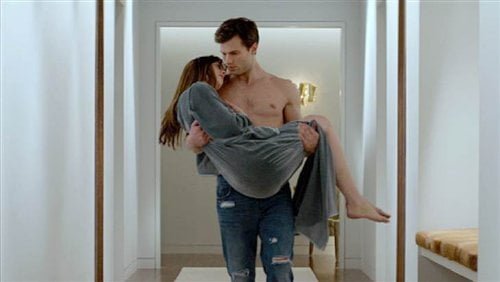 Anastasia Steele (Dakota Johnson, "Need for Speed") is immediately attracted to Christian Grey (Jamie Dornan, "Marie Antoinette," TV's 'The Fall'), the billionaire businessman she's interviewing for her college paper, but also intimidated. She's amazed when he shows an avid interest in her, but when Ana begins to see Christian, she's exposed to "Fifty Shades of Grey."

And maybe the cleverest thing about E.L. James's former Twilight fan fiction (originally published under the name Snowqueen's Icedragon) is its double entendre title. With an adaptation by "Saving Mr. Banks's" Kelly Marcel, director Sam Taylor-Johnson ("Nowhere Boy") attempts to make a silk purse out of a sow's ear, but while she leavens the experience with some well mined character humor and gives the production a glossy sheen, you can only put so much lipstick on a pig. Having never been able to bring myself to read the books, the takeaway from the film adaptation is that what turns a woman on is the challenge of changing the man of one's dreams (the only qualifications of said being hot, rich and powerful) by being a cock tease. This is apparently accomplished by biting one's lower lip, giggling like a schoolgirl and walking away a lot (any entertainment the film's first half offers is lost in the second's repetitive 'I want you-get away from me' loop). And after all the build up to the unveiling of Mr. Grey's 'playroom,' his sadistic acts consist of using a peacock feather and delivering half a dozen spanks, the latter of which completely undoes the same heroine who just negotiated anal fisting out of her 'contract.' That contract is what Christian tells Ana he's used for the past fifteen women who've agreed to enter his warped world (What happened to them? Is there a Bluebeard's closet?). Rules are established with both punishments and rewards, but the submissive can strike anything she finds too sexually objectionable before the fun begins. After keeping him stringing along, Ana decides to play Christian at his own game and requests a 'business meeting' to go over terms and bless Taylor-Johnson for giving us one truly funny scene, even if it eventually falls into the same pit all the others do. The frumpy girl who first walked into Grey Enterprises like Ann Hathaway's Andy into the den of Miranda Priestly (Grey's office help all look like they've walked out of a Robert Palmer video), strides in in a killer frock to ask, pencil poised, what a butt plug is (while we're left wondering where Christian's stored all the truly kinky stuff that gets talked about but never appears). Johnson and Dornan do as well by the material as can be expected, although, oddly, Christian's driver Taylor (Max Martini, "Captain Phillips," "Sabotage") is, to my eyes at least, hotter than he is. As Dr. Grey, Christian's mom, Marcia Gay Harden camps up her character from the late, lamented 'Trophy Wife.' The production features lots of overhead shots of sparkling cities and Grey's fabulously minimalist Seattle penthouse. Danny Elfman's music is the most distinctive traditional score I've heard in a while. The film's ending is its own kind of cock tease, a cliffhanger leaving us suspended until the rest of the trilogy rolls out. What does Ana's mom's healthy sex life have to do with anything? Why does the obviously-more-suitable-for-Ana José (Victor Rasuk, "Raising Victor Vargas," "Godzilla") exist in this story? Why does Christian hate his brother Elliot (Luke Grimes, HBO's 'True Blood,' "American Sniper")? Who's the mysterious friend of his mom's who got him into S&M at the tender age of sixteen? How will Christian sooth Ana's hurt wittle feelings? The answers to these and many other questions may turn out to be unintentionally hilarious, but the sad truth is that so many women have bought into this tale, a Harlequin romance tricked out with pseudo-psychology and toothless kink. Grade: