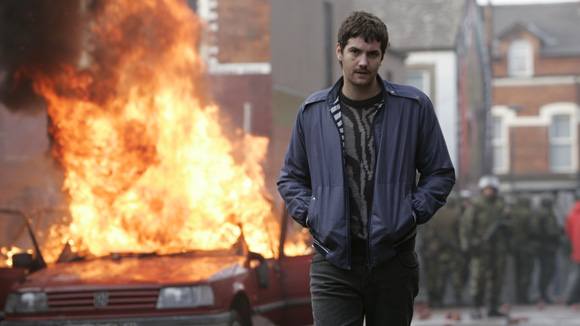 Martin McGartland (Jim Sturgess) was born during the height of the Irish Troubles in 1970. The Irish Republican Army pitted its resources to the rebellion against the Royal Ulster Constabulary (RUC) and the British Army. Young Martin, a Catholic, rose in the ranks of the IRA and accepted into the highest levels of the revolutionary movement. His arrest brings him to the attention of the RUC and, run by an agent called Fergus (Ben Kingsley), he agrees to turn informant in the hope of saving lives in “Fifty Dead Men Walking.”

"Fifty Dead Men Walking" is a curious anomaly - an IRA film told from the British perspective of inducting a petty Irish thief into spying, an independent film that feels oddly Hollywood. Jim Sturgess ("21") is solid as Martin McGartland, although the filmmakers never really make us buy that this man was so averse to violence he was willing to sell out his friends - for profit mind you - to help save the British. And yet the film really works as a political thriller. Natalie Press, who costarred a few years back with Emily Blunt in "My Summer of Love," is impressive as Martin's wife and Rose McGowan is surprisingly unrecognizable as a seductive (and flame haired!) IRA heavyweight.

Director/scribe Kari Skogland tells the story of a man, living amidst the strife in Belfast, Northern Ireland, who must make a decision that could mean his life. His choices are to stay loyal to the cause and inflict death and destruction in the interminable civil war or to help the police stop the ongoing bombings, shootings and murders. From 1987 to 1991, Martin informed the police of pending attacks by the IRA, saving, by his reckoning, some 50 soldiers, police and civilians before his cover is blown. This is gritty storytelling where violence is a way of life and confrontation between Catholics and Protestants and police a daily occurrence. The clashes between the pro-IRA civilians, personified by Martin, and the heavily armed and armored soldiers are abrupt and heated by the years of tension and violence. This serious film takes us into the world, adapted from accounts by McGartland and Nicolas Davies, of the long-battling IRA in their quest to free the north from British rule. Skogland shows also the sacrifices made in the name of revolution and the wear it takes on the fighters and the police. Martin’s decision to cooperate with the authorities and against his mates and colleagues is given short shrift with little time spent on his transformation from rebel to informer. This scarcely shows the motivation that would transform him from loyal IRA follower to working closely with the dreaded “Peelers” to save Irish and British lives. This is made up for by the gripping tale of Martin living in two conflicting worlds where the danger of being found out becomes manifold. “Fifty Dead Man Walking” begins with Martin being brutally shot down by hooded gunmen. Dissolve to a decade before and so begins the life of a man who some praise for his heroism in saving lives and others hate as a traitor. Jim Sturgess walks this precarious line well with the cocky assurance, intelligence and fearlessness he conveys upon his character, Martin McGartland. Ben Kingsley, as copper Fergus, is a device more than a character, used as narrator and sounding board for Martin. The mostly unknown (to America) cast – except for Rose McGowan (TV’s “Damages”) – does an excellent job in giving their many characters real substance. Cinematographer Jonathan Freeman uses down and dirty always-roving cameras and muted, dreary colors to give the film its moodiness. Other techs fit the bill well.