Fiddler’s Journey to the Big Screen 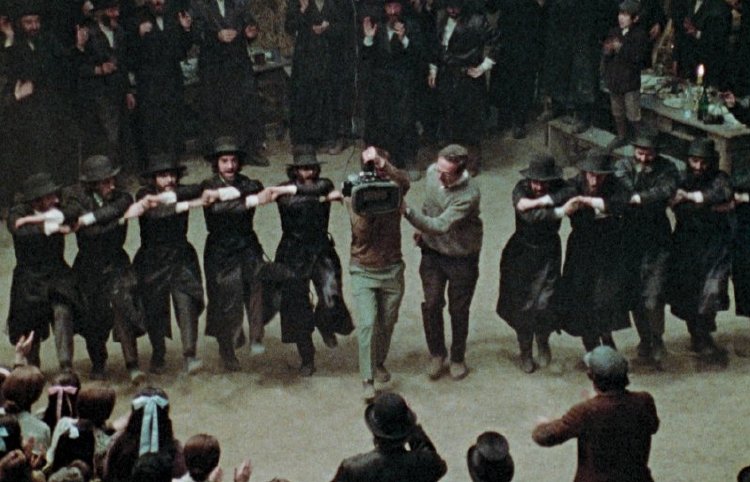 Cowriter (with Michael Sragow)/director Daniel Raim ("Harold and Lillian A Hollywood Love Story") segues from making a documentary about his American Film Institute professor, production designer Robert F. Boyle (“The Man on Lincoln’s Nose”), to a director Boyle worked with on a film that just celebrated its 50th anniversary in “Fiddler’s Journey to the Big Screen.”

Combining interviews shot from 2009 (Topol, “Fiddler on the Roof’s” star), five years ago (director Norman Jewison and lyricist Sheldon Harnick) and last year (Rosalind Harris, Michele Marsh and Neva Small who played Tevye’s daughters Tzeitel, Hodel and Chava) with archive material including behind-the-scenes footage, Boyle’s sketches and inspirational photographs, film clips and stills from stage productions of “Fiddler” and Jewison’s other television and film work, Raim has not only constructed a lively and informational documentary about a beloved musical but crafted a love letter to its director.  This is the type of work that should captivate anyone interested in cinema, “Fiddler on the Roof” fandom or familiarity not required.

Raim delves into so many aspects of what made this musical sing it should make most viewers want to rush out and immediately watch or rewatch the film.  When Jewison was approached to adapt the musical, he responded that the studio might be surprised to learn that, despite his name, he was a goy. And yet since he was a child, Jewison was attracted to the Jewish culture, even attempting to attend schul in his Toronto neighborhood (a lovely late anecdote has him meeting Ben Gurion who tells him ‘Anybody who’s crazy enough to want to be a Jew is a Jew.’).

Jewison was determined to both recapture Eastern European shetls, long destroyed, authentically, and make the musical universal in its appeal.  Meticulous research by Boyle combined with diplomatic negotiations with Yugoslavia’s Tito for locations assured the former while Jewison’s decision to cast Israeli actor Topol from the London production rather than Broadway’s Zero Mostel was one factor which led to the latter.  (Film critic Kenneth Turan disputes Topol’s authenticity, laying out the differences between Eastern European and Israeli Jews, yet provides a wonderful analogy at film’s close, describing “Fiddler” as being like “Brigadoon” in that it was a magical production where everyone disappeared when it was over, no one having achieved breakout fame.)  Jewison also understood that, at heart, the film was about tradition and how traditions shift over generations, something which he believes was behind the film’s popularity in Japan.  The eldest three of Tevye’s five daughters all make marital choices which go against their father’s wishes, Rosalind Harris’ Tzeitel choosing a poor tailor, Michele Marsh’s Hodel a communist revolution and Neva Small’s Chava a non-Jewish Russian soldier.

Composer John Williams describes Jewison’s musicality, his ability to block a scene based on music, and we learn Jewison directed Harry Belafonte’s musical trip through Black America, 1959’s ‘Tonight with Belafonte,’ the first prime time special starring a Black performer.  In one lovely moment lyricist Sheldon Harnick, now in his 90’s, sings ‘Sunrise Sunset,’ now a perennial wedding song.  Jewison describes the scene it was used in as the most beautifully lit of his entire career and how his cinematographer found the film’s color palette by covering his lens with a woman’s silk stocking.

There are many delightful anecdotes to discover from Jewison’s experience watching the film with Golda Meir to the huge (and hugely inappropriate) stars angling for the lead to Isaac Stern’s reaction to being wanted as the fiddler himself.  Bobby Kennedy even has a surprising before and after appearance.  But what comes through most loudly and clearly is that in a town not known for its kindness, the boyishly endearing Norman Jewison is beloved by all.

I had not thought of the movie “Fiddler on the Roof” probably since I saw it when it first came out (and, coincidentally, I had an eight track tape of the movie soundtrack). But, I am a guy who loves movies, and movies about movies, so “Fiddler’s Journey to the Big Screen” is a no brainer for me to watch.

On the surface, it makes perfect sense that director Norman Jewison would helm the big screen epic of the hit Broadway play about the lost Jewish way of life in the shtetl in Tsarist Russia in the 1800s. Except for one thing – “you know I’m a goy?” he asked the producers. That is just one of the stories told in this heartfelt and nostalgic making of a classic.

But, there is much more to this honest homage to the filmmaker and his material. We get a biography of Jewison himself, in his own words, from his early days in television, directing “Tonight with Belafonte,” the first black star on TV and “The Judy Garland Show.” He moved on to light comedies, “40 pounds of Trouble (1962)” and “The Russians are Coming, the Russians are Coming (1966).” His break into serious filmmaking with “In the Heat of the Night (1968)” is told by Jewison and it involves Robert F. Kennedy, just to give you an idea of the man’s ability and artistry.

The bulk of “Fiddler’s Journey” is about the details and nuts and bolts of the making of a big budget Hollywood period piece. We hear from the actors, years later, telling of the excitement of making the original film as well as Jewison providing his detailed recollections of the whole movie-making process. We also learn about the music, its development and how composer John Williams designed the film’s sound. It is also about the complex photography that made “Fiddler” so special to look at, and with nine Oscar wins and nominations. It helps that Norman Jewison is one heck of interesting guy.