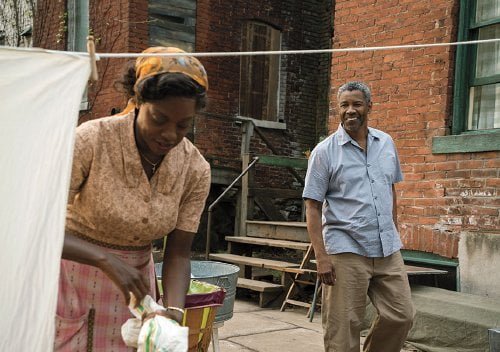 Troy Maxson (Denzel Washington) was once a star in the Negro league but, now, rides the back of a Pittsburg sanitation truck. He was worked hard all of his life to put a roof over the heads of his family and food on the table. With his wife, Rose (Viola Davis), and nearly grown up son, Cory (Jovan Adepo), to care for, Troy puts his own ambitions aside by building “Fences.”

This is Denzel Washington’s third tour as feature director, this time with the play written and adapted by playwright August Wilson. While it is the story of an African American father toiling to raise his family on the mean streets of 1950s Pittsburg, it is a universal story that transcends race. As I watched Troy’s struggle, I saw my own father, Red, and felt the flood of what a tough life he had and how his number one concern was always for his family – despite what it cost him. This is Troy’s life, too. My identification with the characters in “Fences” runs beyond Troy. His son, Cory, when he finally rebels against his father’s iron-handed rule of the roost, made me flash back to the same event in my own life, when I stood up to my father for the first time as a young man. Jovan Adepo really captures the rebellious spirit of coming-of-age at a time when authority is first being questioned by the youth in America. The almost claustrophobic set holds true to “Fences” stage roots with nearly all the story taking place in the confined apartment and tiny yard where Troy builds his fence – the symbol, to him, of the security of his life and family. I saw my own dad in Troy as he worked hard to do what he saw as his job and responsibility. Like all men, Troy has his flaws and foibles and I will leave that for you to see. Denzel Washington does an admirable job both in front of and behind the camera and makes Troy a real, eventually sympathetic, character. Jovan Adepo, too, is solid as the ambitious son, Cory. But, the revelation, here, is the outstanding performance by Viola Davis as loyal, put upon wife, Rose. She has stuck by her man through thick and thin for the many years of marriage but is sorely tested when Troy’s latest peccadillo, resulting in a baby, is dropped on her. Rose is a true stoic who really does stand by her man. I doubt if many other will identify, as closely as I, with the characters in “Fences” but the believably rooted family drama will keep the viewer enrapt. At the time of year where the most highly anticipated films are entertainment for the masses, like “Rogue One: A Star Wars Story,” it is refreshing to see a film that means something to me, personally.