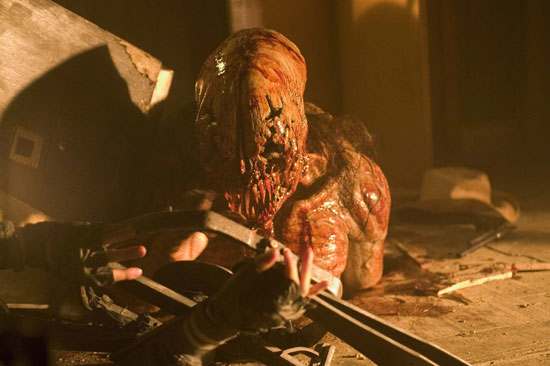 A remote, old wooden barroom is host to a beer delivery guy (Judah Friedlander, "American Splendor"), a self help Coach (Henry Rollins, "Bad Boys II"), a couple of pool players and one of their wheelchair bound kid brother when suddenly a buff commando type bursts in and announces that four creatures are bearing down on them, and fast, intent on making them all their human "Feast.")

And the 3rd season of Project Greenlight (which aired on Bravo vs. the first two years on HBO) proves the charm with the slick, sick but funny bit of Grand Guignol directed by Hollywood son John Gulager. Writers Marcus Dunstan and Patrick Melton meld a twisted sense of humor into a title card trick with a twist - each character is introduced by name, occupation and possible odds of survival (one of those pool players is "Clerks II's" Jason Mewes whose survival is cheekily said to have already exceeded expectations). This device gets the film up and running pronto with slam bam action that doesn't let up until a half time respite. Each character fulfills a need and their fates aren't necessarily predictable. Sure the loser Beer Guy spends the film decomposing (maggots are a favorite of "Feast's" propmeisters) and the less well-intentioned of the bunch are not spared, but depression and hot headedness actually prove useful here. Navi Rawat (TV's "24," "The OC," "Numb3rs") proves a resourceful heroine. She's one of two mothers, the other being waitress Tuffy (Krista Allen, "Anger Management"), who services sleazy Boss Man (Duane Whitaker, "The Devil's Rejects") to keep food on the table. The senior bartender (director John's dad, Clu Gulager of numerous television westerns) is hip but practical whereas senior patron Grandma (Eileen Ryan, "I Am Sam," "Eight Legged Freaks") is hip and legendary ('She gave Mick Jagger a blow job. Recently.') Bozo's (Balthazar Getty, "Ladder 49") big talk gets him in hot water, but he's genuinely protective of disabled brother Hot Wheels (Josh Zuckerman, "Austin Powers in Goldmember"). Both get appreciative eyefuls of waitress Honey Pie (Jenny Wade, "Rumor Has It..."), who frequently disrobes to clean off splatter. And there's splatter aplenty in "Feast," which features decapitations, amputations, disembowelments and a particularly drawn out eyeball plucking. The beasts themselves are a half terrifying half amusing breed, much like the film, fast moving teeth hiding behind old Western hides and heads. Editor Kirk M. Morri ("Mimic 2") has a knack for not cheating with the showing without divulging budgetary restraints and cinematographer Thomas L. Callaway deals with a nighttime setting without undue murk. Gulager gets better than average for the genre performances from a cast a little more well known than expected ("Greenlight" spent a lot of time on his predilection for hiring friends and family) and pays homage to the Westerns of his dad's career with a shot from "The Searchers" at film's end. "Feast" is better than expected and one of the rare combinations of horror and humor that gets the balance right. It's more laugh out loud funny than many a comedy that's come out this year (Henry Rollins in pink sweat pants!), yet still delivers some nasty jolts.