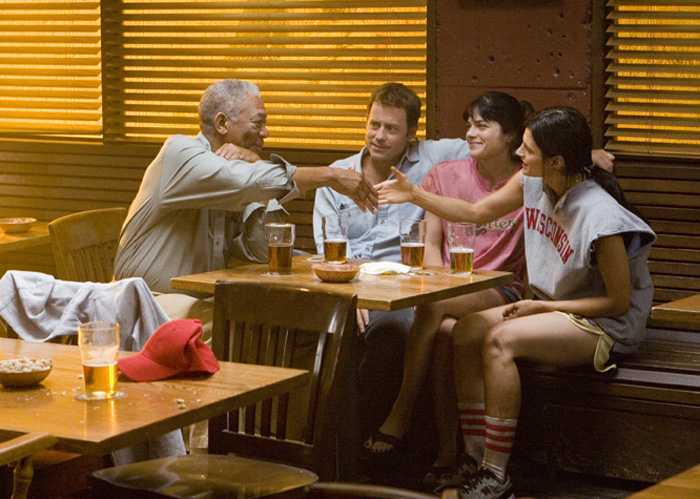 Harry Stevenson (Morgan Freeman) is on sabbatical from a college in a small Oregon town. He has so much time on his hands that, while whiling away the hours in a local coffee shop, he begins observing love in the air for his friends and neighbors. Through his eyes, we see the effect of this “Feast of Love.”

Director Robert Benton, working with a script by Allison Burnet (from Charles Baxter’s novel), attempts, and fails, to tell the several stories that comprise this not-a “Feast.” Besides narrator Harry’s story – married to Esther (Jane Alexander) and grieving a loss which forced him to take leave from teaching – there is Jitter’s Café owner Bradley (Greg Kinnear) and his without-a-clue marriage to Kathryn (Selma Blair), who falls in love with another woman. After they break up, he meets and marries realtor Diana (Radha Mitchell) who happens to have a continuing affair with married man David (Billy Burke). All I can say about Bradley and his travails is “Is he unobservant and without a clue or just plain stupid?” Then there is Oscar (Toby Hemingway), who works for Bradley. Cupid’s arrow strikes when pretty Chloe (Alexa Davalos) walks into the shop and asks for a job. Theirs is a cloying romance, overtly sentimental and appealing to only the weepers in the audience. The cutesy couple is covered in treacle and way too sweet. The problem with “Feast of Love” is that I cared not one whit about nearly all of the many characters. Morgan Freeman does his best to anchor this shipwreck but his presence, alone, cannot save what is, essentially, a dull, listless film. The internet buzz about the graphic sex in the film is unfounded. The several (gratuitous) sex scenes are neither erotic nor all that graphic. (Editorial question: why is it that foreign films are able to make sex sexy without removing a stitch of clothing while American films, for all the nudity, make it boring?) Except for Morgan Freeman and Jane Alexander, who do a fine job creating their loving couple, the cast of Feast” is wrought with two-dimensional characters saddled with not very believable situations. I should care about these people and do not.