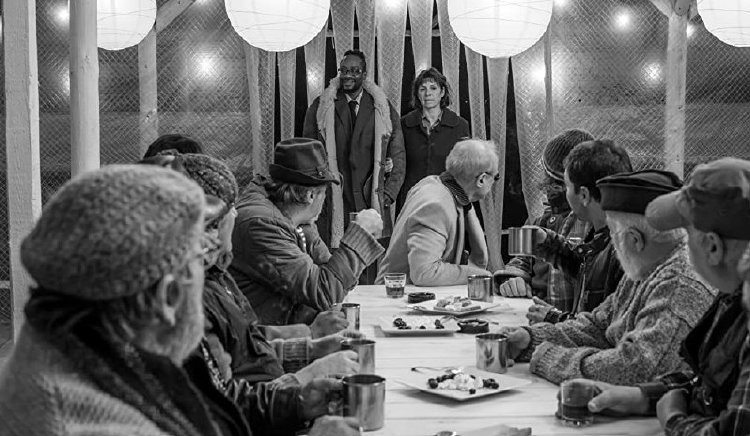 Because of a lack of school-aged children, Svetla (Svetlana Yancheva, “T2: Trainspotting”) has lost her job as a teacher in a small Bulgarian town by the sea.  The widowed woman, a target of a lot of unwanted male attention, wonders how she’ll get by throughout the winter.  Svetla heads into the woods for some hare hunting, but instead finds her rifle pointed at African refugee Bamba (Michael Flemming) in “Fear.”

Bulgaria’s submission for the International Feature Oscar is a dark comedy about xenophobia which paints politicians as inept and the media as fear-mongers.  But writer/director Ivaylo Hristov has also crafted a charming and inspiring love story between two characters easy to embrace.  “Fear” is a delightful take on a serious subject that ends on a note of whimsy and will reward anyone willing to give it a chance.

While these Bulgarians are used to housing certain type of refugees (a group of Afghanis will be shuttled about various forlorn facilities to comic effect), it’s clear that race plays a major factor in their acceptance.  When Svetla stops by to chat with the border police and tells them she is going hunting, she’s told they are too, hunting nosirs, ‘black creatures with white teeth’ who hold up their arms and say ‘No, sir!’  So when Svetla runs into a black man with long braids gathered in a scarf carrying a suitcase down the road, she is immediately hostile.  (Later, as Svetla begins to warm to Bamba, a doctor who lost his family to war in Mali, we will hear that ‘Everyone has their own refugees.  We don’t want hers.’)

Svetla tries to turn the man into the border police, but they are out patrolling with a television reporter in tow.  She then marches him to the home of Mayor Slavka (Kristina Yaneva) who suggests she take him back there and tie him to a tree.  Svetla ends up housing him in her shed (which, ironically, he will share with her friendly German Shepherd, a dog often used against Blacks during the civil rights era) and when, frustrated by the lack of assistance, frees him to go, is astonished when he simply camps out, freaking out her neighbor Gogovska (Miroslava Gogovska).  She brings him inside and makes him dinner, awakening the next day to find the man chopping wood.  Soon the town’s tongues are wagging, though, Svetla’s windows broken, her home defaced with graffiti.  Ivan (Ivan Savov), who has been pursuing Svetla relentlessly, is incensed she is with a Black man.  Gogovska’s (Miroslava Gogovska) husband Gosho (Krassimir Dokov), who was treated by the doctor, speaks too timidly in his defense.

Hristov mines a lot of comedy from two characters speaking different languages (Bamba speaks English), Svetla, at least, expecting to be understood.  He has a firm grasp of tone, as this dynamic continues to evolve.  What is initially threatening becomes comical, Svetla astonished when Bamba reacts to the peppers she *told* him were hot, then wistful as Svetla recounts the years spent with her husband and is shown a picture of Bamba’s slain family.

The spare Eastern European setting where woman work, men drink and money is tight is reminiscent of many a Bela Tarr film, cinematographer Emil Christov’s glorious black and white lensing adding to the echoes, but this film is nimbly paced.  Drone shots of the unfinished holiday village Costa del Croco emphasize the area’s downturned economy, while also suggesting there is plenty of space to house refugees.

We immediately empathize with the character Yancheva creates, a single woman trying to survive in a frequently hostile male environment.  She may act tough, but her frequent trips to her husband’s grave reveal her loneliness and Bamba’s presence her compassion and tenderness.  Flemming is a great find, his open friendliness at comic odds with the hostile responses his greetings inspire.  His Bamba is a gentleman in the truest sense of the word.  Hristov himself appears in the film’s magical snow globe of an ending, directing this lovely couple off to find happiness far, far away while a Bactrian camel crosses the road in a final note of absurdity.

Svetla (Svetlana Yancheva) is a widow and schoolteacher who lost her job. Working as a part-time Bulgarian border guard, she meets Bamba (Michael Flemming), an African doctor and refugee from Mali desperately trying to get to Germany in “Fear.”

Writer-director Ivaylo Hristov takes the film’s title and dovetails it out in many layers in this story of a lonely widow of 15 years whose life is changed with the arrival of an unlikely stranger.
Svetla, out of work, is afraid of being alone and ostracized by the close-knit members of the tiny community. The arrival of illegal immigrants strikes fear into the hearts of the townsfolk who are paranoid and afraid of change. Bulgarian nationalism (“Bulgaria for Bulgarians!”) forces fear of outsiders with anti-Semitism and anti-Muslim sentiments running high. The title is apt.

Svetla, when we first meet her, is a stern and taciturn woman forced to live in loneliness because her “culture” demands she be faithful to her late husband. The culture shock she undergoes with Bamba’s arrival gives her, and us, a glimmer of hope and the filmmakers carry forth that kernel of hope for Svetla. The physical and emotional change she experiences because of her new friend is palpable.

While the politics of racism, bigotry and hate are the underlying current to the setting, it is the gentle love story that develops between two lonely, and very different in many ways, people who find each other despite the above-named obstacles.

One of the things I love about foreign-language films from around the world is that each can put you in the midst of a foreign culture and enlighten the viewer about that culture. Director Hristov does just that, though the hate and bigotry in ample evidence – the N-word plays prominent – makes me NOT put Bulgaria on my must-travel-to list for now